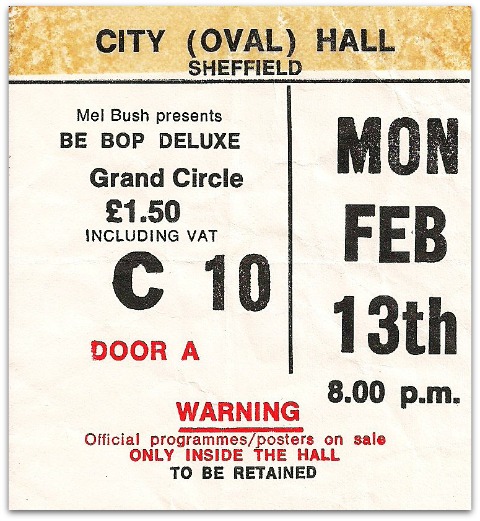 BBC ‘Sight & Sound In Concert’ watched on telly and taped off the radio 4th February.

I’m ready for this. Be Bop Deluxe are my favourite band. Since hearing the 2:30 proto-punk rush of ‘Maid In Heaven’ on John Peel a couple of years ago, I have adopted this band like no other before. ‘Modern Music’ was top of my Christmas ’76 wish list, I bought ‘Live In The Air Age’ last summer, and I’ve borrowed and taped ‘Axe Victim’, ‘Futurama’ and ‘Sunburst Finish’. I have the ‘Hot Valves’ EP and their only hit to date ‘Ships In The Night’ on 7” single. I am a fan. 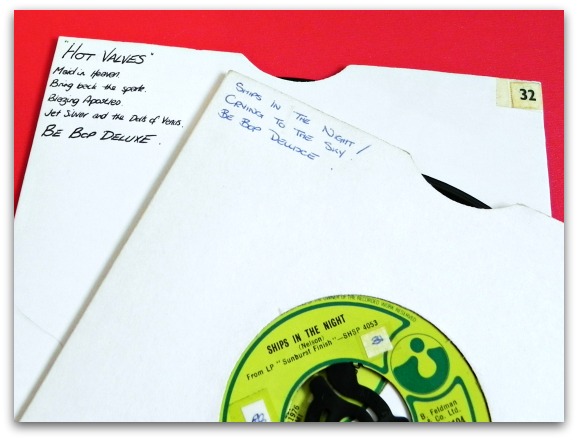 Why Be Bop Deluxe?

A polished prog – pop hybrid, with a wink of glam; I have a weakness for records that sound expensive. Christmas ’75 had brought Queen’s ‘A Night At The Opera’, apparently the most costly album ever recorded; and Be Bop’s airbrushed tales of airships, seagulls and science fiction are sonic catnip to a hi-fidelity, stereophonic aficionado like me. 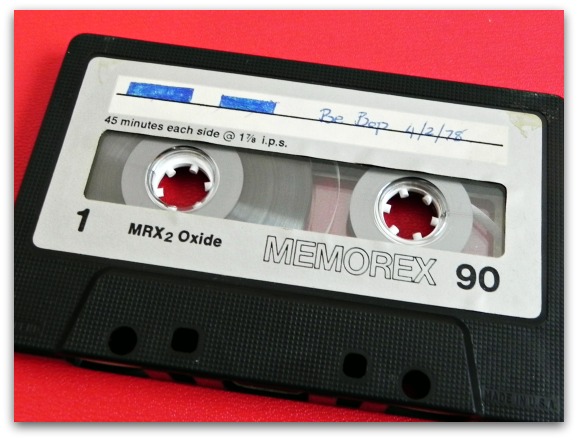 Is it Be Bop, or is it Memorex?

It’s also provincial pride. Be Bop Deluxe have songs like ‘Adventures In A Yorkshire Landscape’, and ‘Mill Street Junction’. Northern songs, one foot in the fallout shelter, the other in the coal bunker. Their leader Bill Nelson comes from Wakefield, 25 miles up the M1; we’re practically neighbours.

But the main reason I love Be Bop Deluxe more than any other band is nobody else at school likes them. They are My Band. Everyone loves Bowie, Roxy, Pink Floyd, SAHB even; but no-one really cares about little old Be Bop Deluxe.

No-one, except me and Brent.

Brent lives up the road from me. A year younger, he’s a puppy-ish Paul McCartney who’s a huge hit with the girls. Brent has young “with it” parents – Barbara and George (first names!) – and we spend a lot of time their front room listening to ‘Dark Side Of The Moon’, ‘Every Picture Tells A Story’, ‘Venus And Mars’ and Be Bop Deluxe.

We’ve blagged our way into ‘Stardust’ at the local fleapit, and this cautionary tale of lesbians, LSD and a pre-‘Dallas’ Larry Hagman ruining poor David Essex has me already dreaming of a career in the music biz. 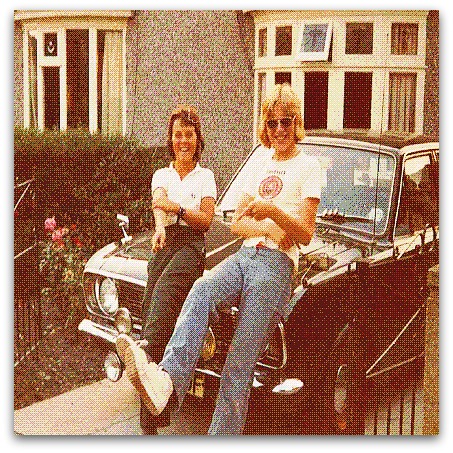 Brent’s gone on record with his love of Be Bop Deluxe. “BILL NELSON MAKES MUSIC IN DREAMLAND” in elegant, permanent marker on the wall of the school changing rooms in Longley Park. This is a great deal more eloquent than “BOWIE ROOLS OK” or indeed “MOTT”.

We’re in the grand circle at Sheffield City Hall. I’ve been here before with school for speech days, but this is different. Lots of loon clad lads, denizens in denim and greatcoats, lots of sewn on patches: LIZZY, UFO, RUSH. Northern Rock. Paper darts arc through the warm fug of beery farts and Player’s No 6, as the apparently random mating cries of the rock male – “wally!”, “albatross!” pierce the murk. I’ve bought the tour programme. Lots of pictures of the band on tour in America, which Bill has pretentiously captioned. A cabin Polaroid of an airliner wing at 30,000 feet becomes “Perseus’ sword falling from a pink pale heaven.”

Suddenly we’re distracted as a stick insect in a Sue Ryder Shop suit stalks on-stage clutching a plastic bag. This is John Cooper Clarke and the lads already hate him, the cheapo shades, spiky hair and punky countenance - before he’s even sung a note. Undeterred, he digs into the bag, pulls out a notebook and, leaning into the mic; starts to read a poem. 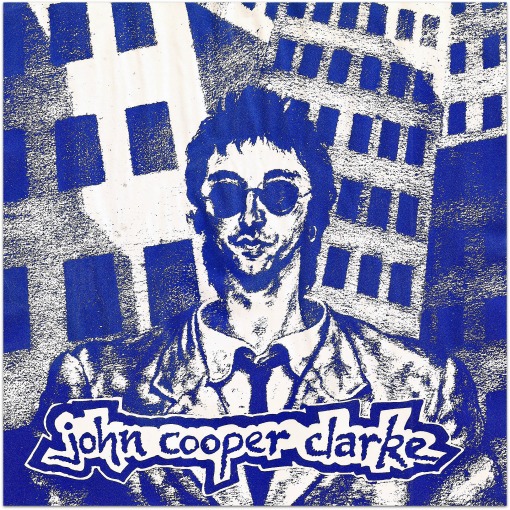 This is unexpected. Recent guests on Be Bop Deluxe tours have been Steve Gibbons, Burlesque, Doctors Of Madness - proper warm up groups. In Sheffield, the only poets anyone knows in 1978 are Pam Ayres and Cyril Fletcher with his odd odes on “That’s Life”.

“THAT’S SHITE!” Suddenly hands that were hoping for a few practice chords on air guitar are flicking V signs as a bellicose barrage rains down. Undeterred, John Cooper Clarke presses on. ‘Readers Wives’, ‘Kung Fu International’, ‘I Married A Monster From Outer Space’, ‘You Never See A Nipple In The Daily Express’: all delivered with Gatling gun intensity. He is quite brilliant, a mordant Mancunian wit who puts the rude in erudite and the wry in ribald.

In the stalls, the dandruff dunderheads are confused. This winkel-pickin’ drain-piped punk rocker in front of them is the enemy, but he’s got them in stitches. The reaction is a mixture of mirth and mouthy disapproval, sometimes from the same person. “Enter the dragon, exit Johnny Clarke!” With that he is gone, the trans-Pennine raider happy with an away point.

Was there ever a more sensible rock band than Be Bop Deluxe? The Ivy League suits that graced ‘Modern Music’ have gone. Bill Nelson stands before us, gold tipped Chelsea boots, cheekbones you could grate Wensleydale on; the thin white Duke of York.

Much of the band’s initial success was based on Nelson’s prowess as a nascent guitar hero. Album titles like ‘Axe Victim’ and ‘Sunburst Finish’ have reinforced this image. It’s 1978, and as a keen sci-fi fan, Bill is no doubt aware of H.G. Wells maxim "Adapt or perish." He’s personally invited John Cooper Clarke to open for them, and in case we hadn’t noticed, the new album is called ‘Drastic Plastic’. To further emphasise the newness, we have songs called ‘New Precision’ and ‘New Mysteries’. ‘Love In Flames’, ‘Possession’ and the clunky ‘Superenigmatix’ are all flecked with New Wave foam. Shorter songs, fewer solos, more synths. He’s trying to push the envelope but the audience aren’t sure, they’ve marked the envelope ‘Return To Fender’. 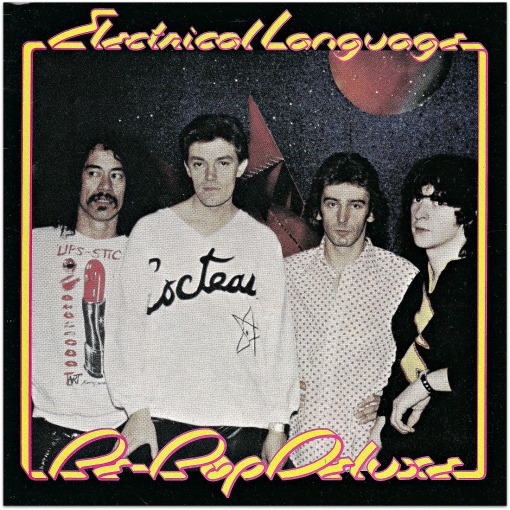 A Ballardian ballad – ‘Islands Of The Dead’ – is dedicated to Sheffield Wednesday striker Rodger Wylde, which makes half the room happy. Its odd hearing a delicate aesthete like Nelson mention football, like finding out Albert Camus was a useful goalie or Jean Cocteau had a season ticket at Stade Saint Germain. 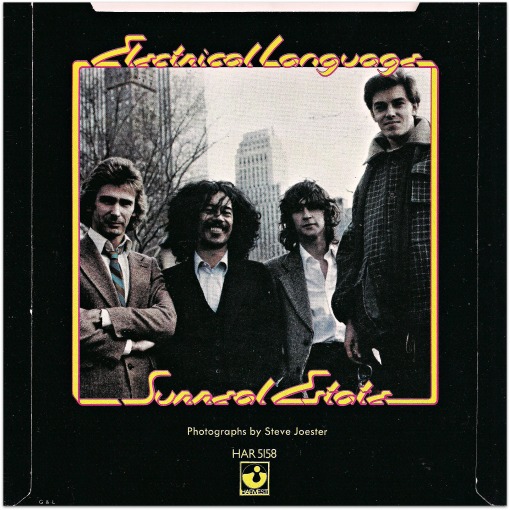 And before the stylist got to them. Be Bop Deluxe in New York, circa 1977.

New songs give way to older favourites, this band are technically gifted, more chops than Dewhurst the butchers; and by the time we get to ‘Blazing Apostles’, with its extended funk-rock workout, the City Hall is rocking. The encore, a crunching romp through ‘Purple Haze’, seals the deal. Bill plays all his best Hendrix licks, and 2,000 happy souls spank their invisible planks, swaying denim daffodils lost in reverie somewhere between Barkers Pool and the ballrooms of Mars.

30 minutes later, a still buzzing huddle has gathered around the stage door, waiting for Bill Nelson. I’m nearest when he eventually appears; pen and programme at the ready.

He takes my pen and signs my programme. He keeps my pen.

Brent and I wander back down Fargate to catch the number 76 back home. It’s half-term, no school tomorrow. Bill Nelson has my pen, and all is right in the world.

Bill Nelson dissolved Be Bop Deluxe later in 1978. He returned with the New Wave-focused Bill Nelson’s Red Noise in 1979.

John Cooper Clarke signed to Epic, and invited Bill Nelson to guest on his debut album. In the 1980’s he appeared alongside the Honey Monster advertising Sugar Puffs breakfast cereal. Championed today by Arctic Monkeys and Plan B, his promotion to National Treasure is surely imminent. John Cooper Clarke is 65 years old.