“School’s out for summer.

That’s it. Finished. Done. Seven years. Two and a half thousand days from pre-teen to young adult. From ‘The Beano’ to Eno, Lego to Devo, Buster Keaton to Diane Keaton, Susan Stranks to Siouxsie Sioux. 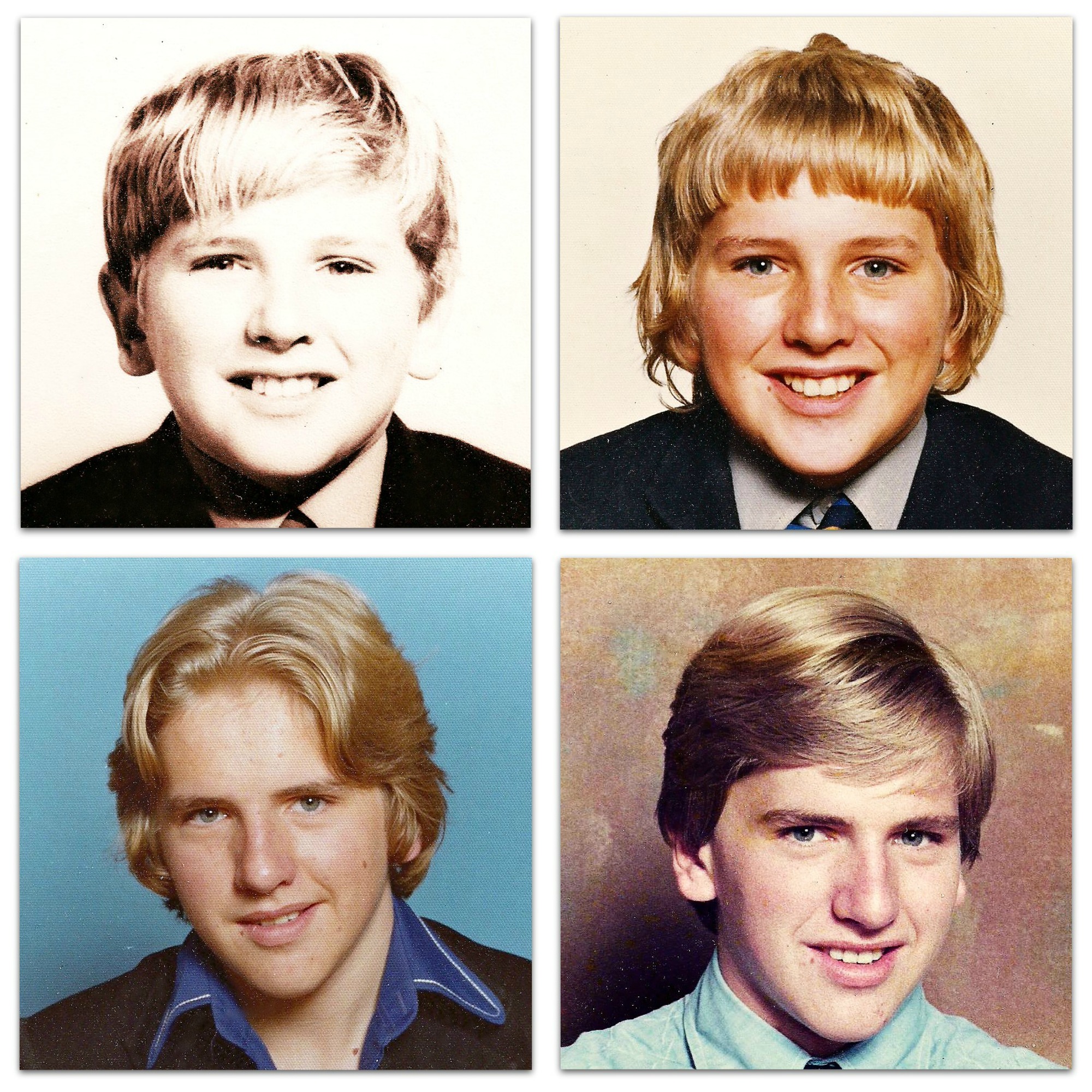 It has been a drawn out fledge. Formal lessons finished a couple of weeks ago, as we sixth-formers took flight to our bolt-holes in bedrooms and attics. Frantically trying to mentally gaffer-tape revision notes into corners of feverish minds, ruffled feathers quivering with an ever rising fear of failure to launch.

Here’s blind Gloucester, eyes-gouged out in ‘King Lear’; there’s the dazzling King Charles XII of Sweden, soldier and statesman, dead at thirty-six. Tucked somewhere in between are fragments of Anthony Sampson’s ‘Anatomy of Britain’. Tea-stained sheafs of foolscap and ring-bound dossiers committed to memory, crammed haphazardly into the bulging cerebral filing cabinet. Just a synapse away from an already immaculately filed and cross-referenced archive of popular music trivia (including B-sides), film-related apocrypha and junk culture.

It seems appropriate, then, that the Anthony Sampson quote which has the strongest resonance for me is from one of my movie heroes, moustachioed quipster Groucho Marx:

“I don’t care to belong to any club that will have me a member.”

In my final exam paper for British Constitution A-level, I duly manage to jemmy this sentiment into my disjointed diatribe on the role of the second chamber in Parliament. 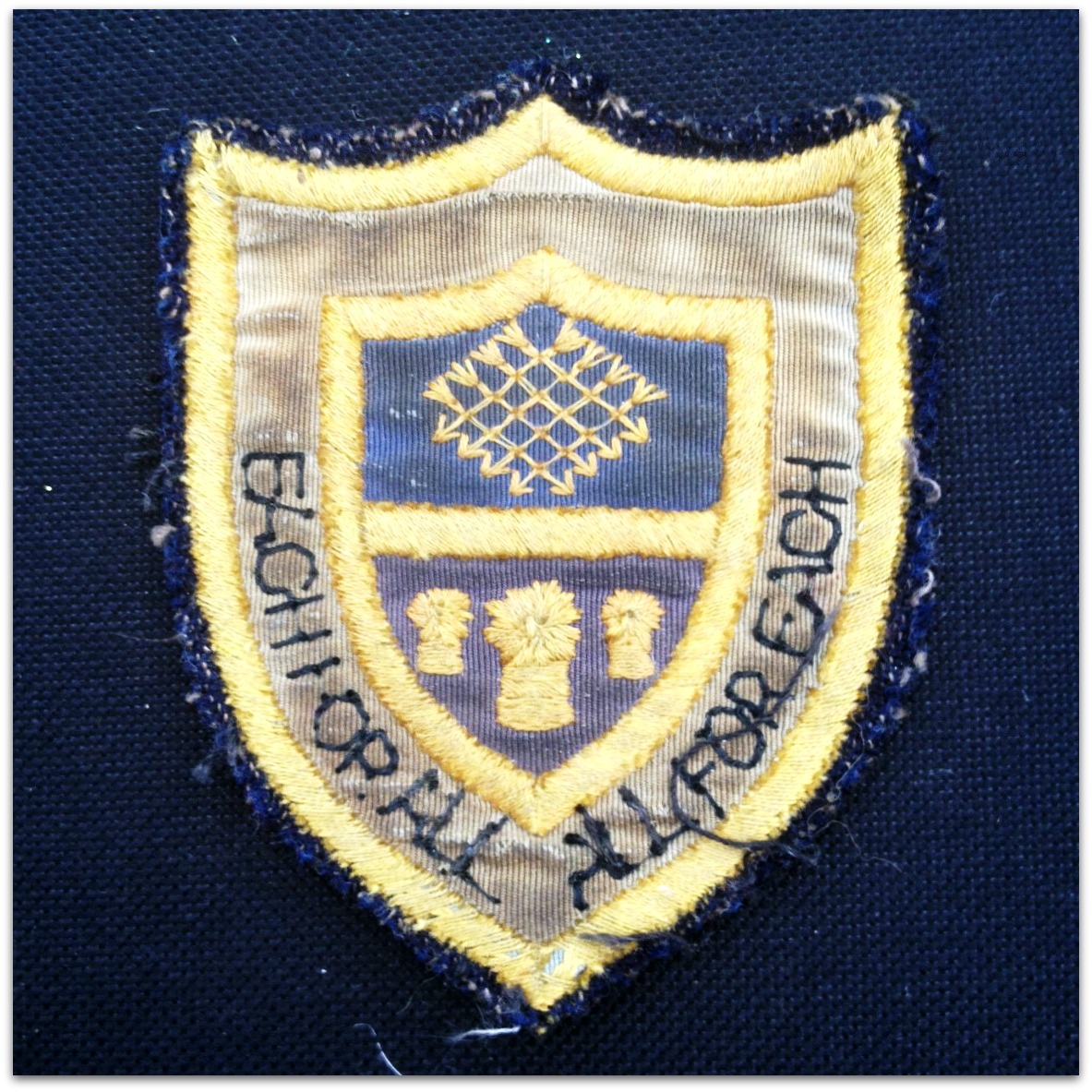 There’s a strange mix of relief, sadness and euphoria among my sixth-form comrades. We are still going to be hanging out for the rest of the summer, until University places break up our band of brothers; but the last ever day at Firth Park Comprehensive is a momentous occasion which needs to be properly celebrated. So we elect to mark the day the best way we know, with a trip to The Limit.

My closest friends are here: Vinner, Wilma, Lango and Timbo. Plus Mackie, Quanny, and some of the cooler girls from class. Plus a couple of alright teachers, with whom we’ve come to be on first name terms. It seems appropriate to me that, given my travails in English Language and Lit., that tonight The Limit will be graced with a visit from the Salford Shakespeare himself John Cooper Clarke.

My first encounter with him was at a Be-Bop Deluxe gig in 1978. A punk-rock stick insect in a too-tight suit bravely taking on Bill Nelson’s denimed long haired hordes, as his razor-sharp poetry confused, bemused and amused them in equal measures.

Since that encounter, the Lancashire laureate has released three albums: ‘Où Est La Maison de Fromage?’, ‘Disguise In Love’ and ‘Walking Back To Happiness’. He is signed to CBS Records and, together with Brixton bard Linton Kwesi Johnson; he is very much the face of young British poetry. Given his profile and growing reputation, it is no surprise to find The Limit Club is busy tonight, as Sheffield’s shuffling hip-kids, misfits, muso’s and boozers gather at their favoured watering hole.

Quite who thought a thundering, six-legged collision of post-punk, faded-glam and weedy reggae was the ideal support for this one-man-and-his-plastic-bag headliner remains a mystery. Here comes Fàshiön Music from Birmingham, scattering grave accents and dieresis with the Esprit De Corps of a band hell-bent on using the entire Letraset sheet in one afternoon. More cock-eyed rabble than Cockney Rebel, their C&A Roxy-isms ooze like mild, green Ferry liquid through the PA system. “Poxy Music” shouts Vinner in my ear, as we stand, pints in hand, grimly enduring this bullshit from The Bullring. John Cooper Clarke, clutching his plastic carrier bag of note-books, clambers up on to The Limit stage to a heroes’ welcome. ‘Blonde On Blonde’ era Dylan meets Smike from ‘Nicholas Nickleby’, skinny as a roll-up, apparently held together by pipe cleaners and starch. A note pad is conjured from the sack, and, peering into it at arm’s length, through Orbison-thick shades; he begins:

“This one’s called ‘Valley Of The Lost Women’”.

His accent is as broad as the Manchester Ship Canal, with a mind as deep and dirty to match. He rattles off his verses with Gatling gun intensity, nocturnal journals of bodily fluids and functions, kinky latex and discarded Durex. His right hand grips the mic on its stand, as if it’s his personal conduit to the National Grid, (that would account for his crow-black bird’s nest hair-do apparently having a life of its own). 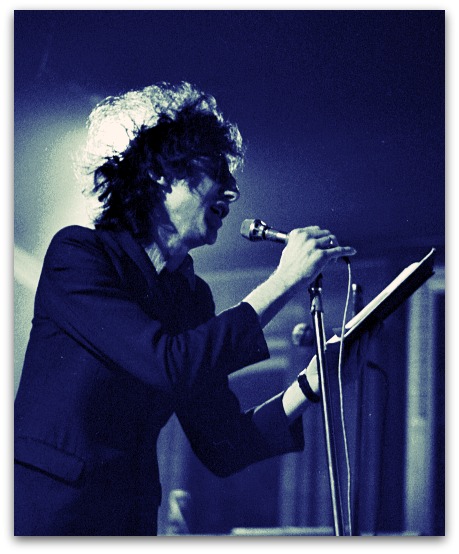 A quick rummage in the bag and he leaps into the Close Encounters Of The Fifth Kind tale of ‘I Married A Monster From Outer Space’, a veritable Valeriy Borzov of breathless badinage. Gulping for air as he turns his prose to pulp, he reaches his apotheosis with the deranged ‘Psycle Sluts: Part One’:

“Twin-wheeled existentialists steeped in the sterile excrements of a doomed democracy, whose post-Nietzsche an sensibilities reject the bovine gregariousness of a senile oligarchy”.

Careening straight into part two, where the zinging
“He makes love like a footballer, he dribbles before he shoots.” gets a huge laugh from the enraptured gathering. He’s a gifted verbal gymnast, clearly in love with the dynamic flik-flaks of internal rhymes. 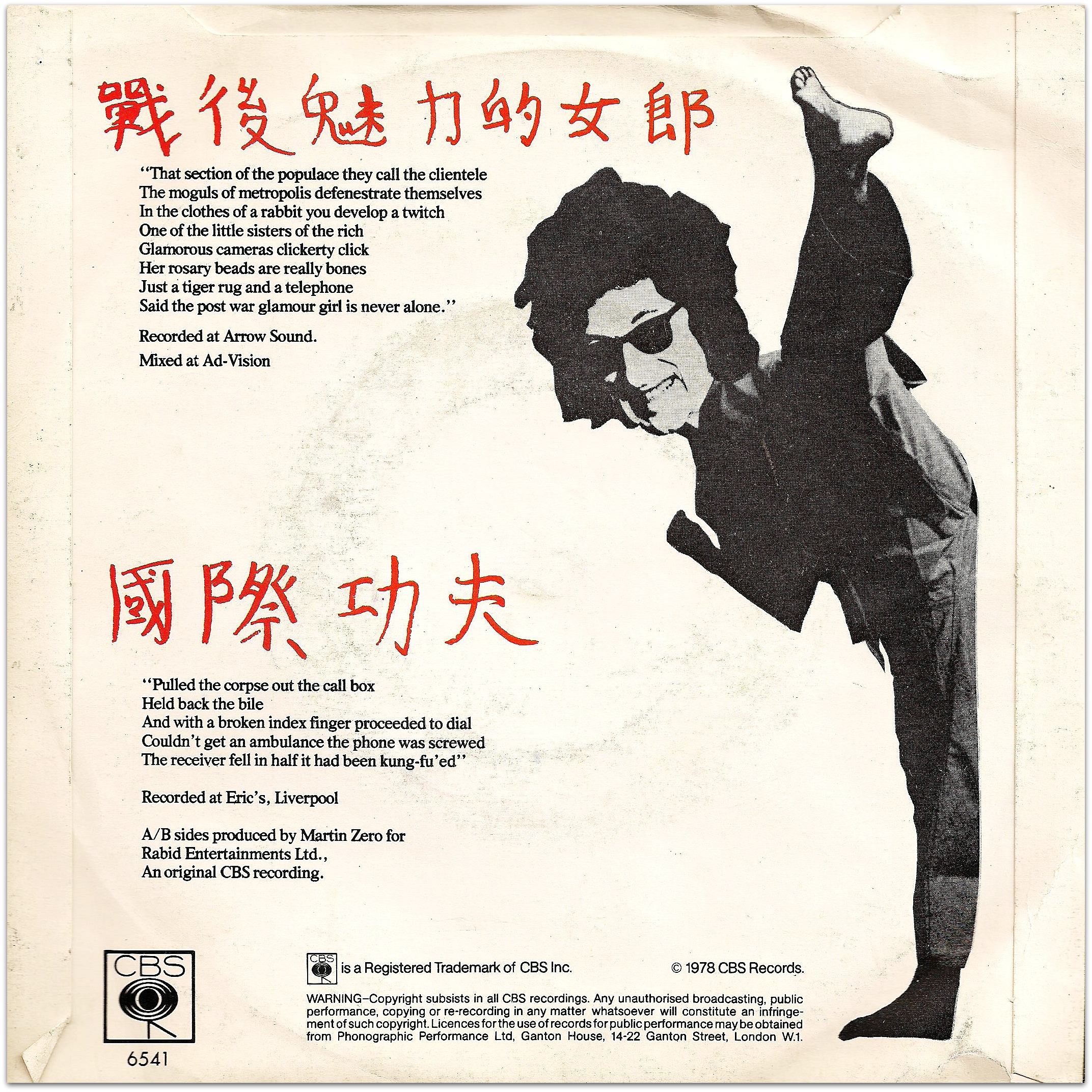 “Hey pal, if I had a face like that, I’d teach me arse to smile.” Another heckler is scythed down to bloody stumps as, appropriately; ‘Twat’ is defiantly delivered. The bag is ransacked again, Cooper Clarke muttering to himself: “Civilisation, don’t let me leave your lonely world.” I immediately spot this as the lyrics to reggae star Keith Hudson’s ‘Civilisation’, from one of my favourite albums, the Virgin Front Line sampler. This further proof to me that JCC is a kindred spirit, as he rattles through the cheap holiday in other people’s misery vignette entitled ‘Majorca’.

Clarke has a brilliant way of tickling the funny bone while gnawing at your conscience. ‘Beasley Street’ is the final piece of the evening, a mill-town Iliad of sink estates and abject Arndale centres stinking of piss, the urchin cousin of his crowd-pleaser ‘Evidently Chicken Town’. The mood changes as he cranks up the horror show oratory. We’re listening now, really listening…

“Keith Joseph smiles and a baby dies in a box on Beasley Street”. No-one is laughing now, he might be a Manc from the wrong end of the Snake Pass, but tonight he’s One Of Us in the Socialist Republic of South Yorkshire. The Tories are back in power; now for a real 1984.

John Cooper Clarke gathers up his little magic bag of poems and bids us goodnight, leaving the stage to triumphant acclaim. As the party breaks up, one of the lads is spotted getting into a comely young teacher’s Cortina. The look on his face suggests he will be getting some extra tuition in Biology A-level not generally covered by the Joint Matriculation Board.

As for me, next Monday I’m joining a club that will happily have me as a member, the 1.4 million unemployed. Such was the influence of JCC in 1979, I wrote this tribute / homage / rip-off. With apologies to all concerned, here is some actual sixth form poetry: 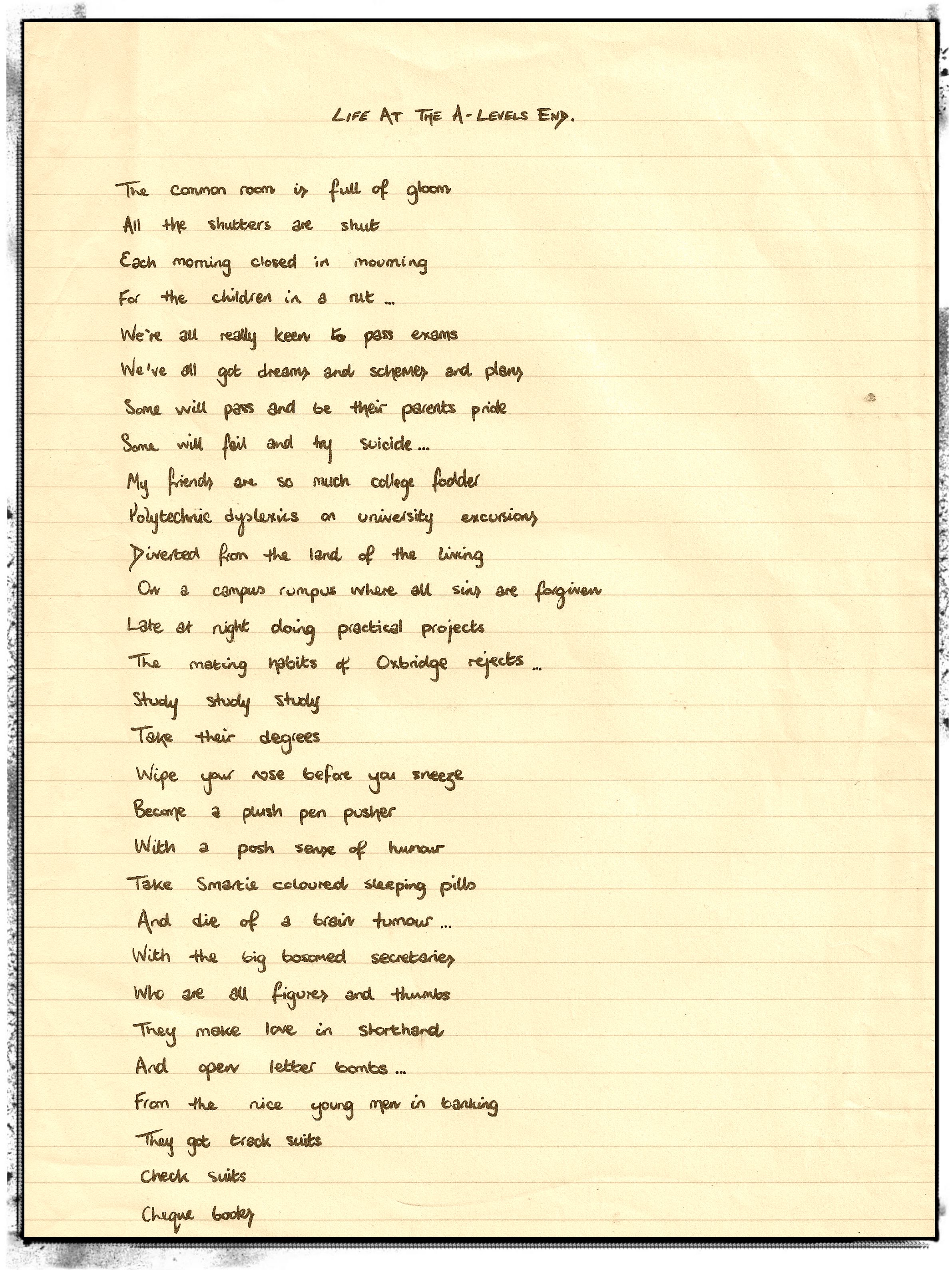 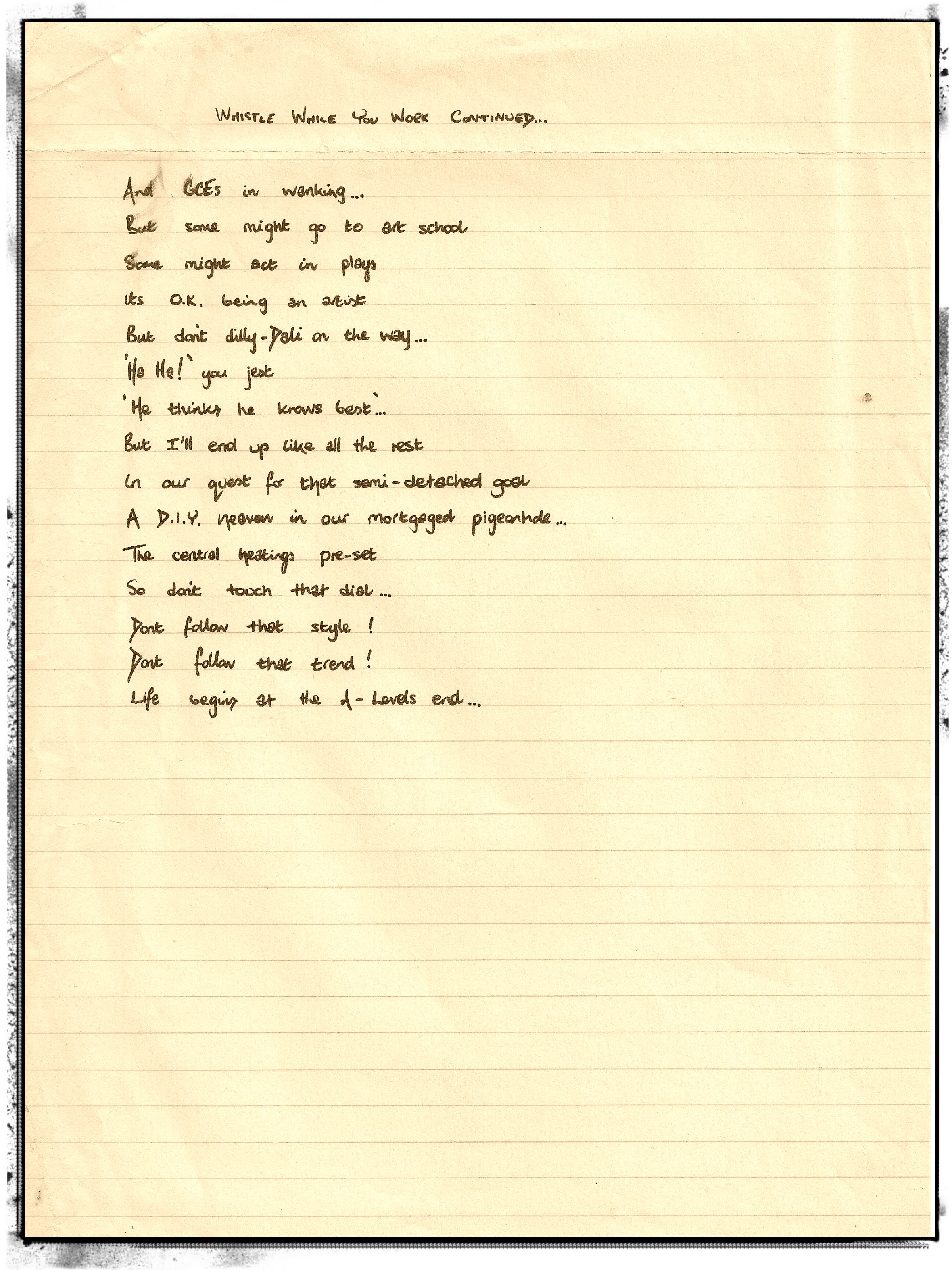