“Pulling the sheets up over my face.

The only place I know I’ll feel safe.”

I’m So Hollow are laying siege to a monstrous slab of rock entitled ‘I Don’t Know’. I can relate to the lyrics; it’s a dangerous, uncertain world out there beyond the blankets. Just two weeks ago, a computer glitch at the US nuclear weapons headquarters NORAD almost triggered World War III. In Tehran, rebel students loyal to the Ayatollah Khomeini have seized the US Embassy. Here at home the unyielding size 5 heel of Thatcher is starting to leave its indelible mark, soundtracked by “When You’re In Love With A Beautiful Woman” by the poisonous Dr. Hook. 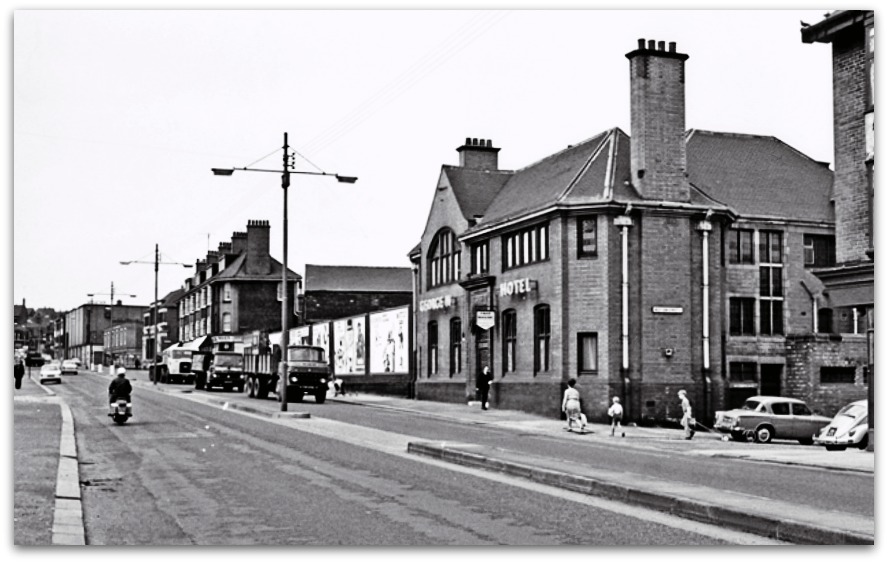 I’m at the first night of the Blitz Club, watching local Sheffield band I’m So Hollow with around one hundred like-minded souls, and it feels safe. We are the upstairs function room of a pub called the George IV on Infirmary Road, a two bus journey to the industrial hinterland halfway between the city centre and Hillsborough. Across the road, the unbroken, serpentine zig-zag of Kelvin Flats tower above me like domino slabs blinking in the November night. Blitz is being promoted by John Blyther, better known as Disco John, an architecture student at Sheffield University, with help from fanzine writer Martin X. Russian and local musician Russ Russian. Disco John is a member at Pips nightclub in Manchester, the North’s premier stable for clothes horses of both sexes, with its rooms dedicated to Roxy, Bowie and soul. With a knowing nod to the emerging Covent Garden venue of the same name, this is an attempt to create a similarly inclusive atmosphere in Sheffield. Cool, underground, independent music for independently minded folk and their kin. 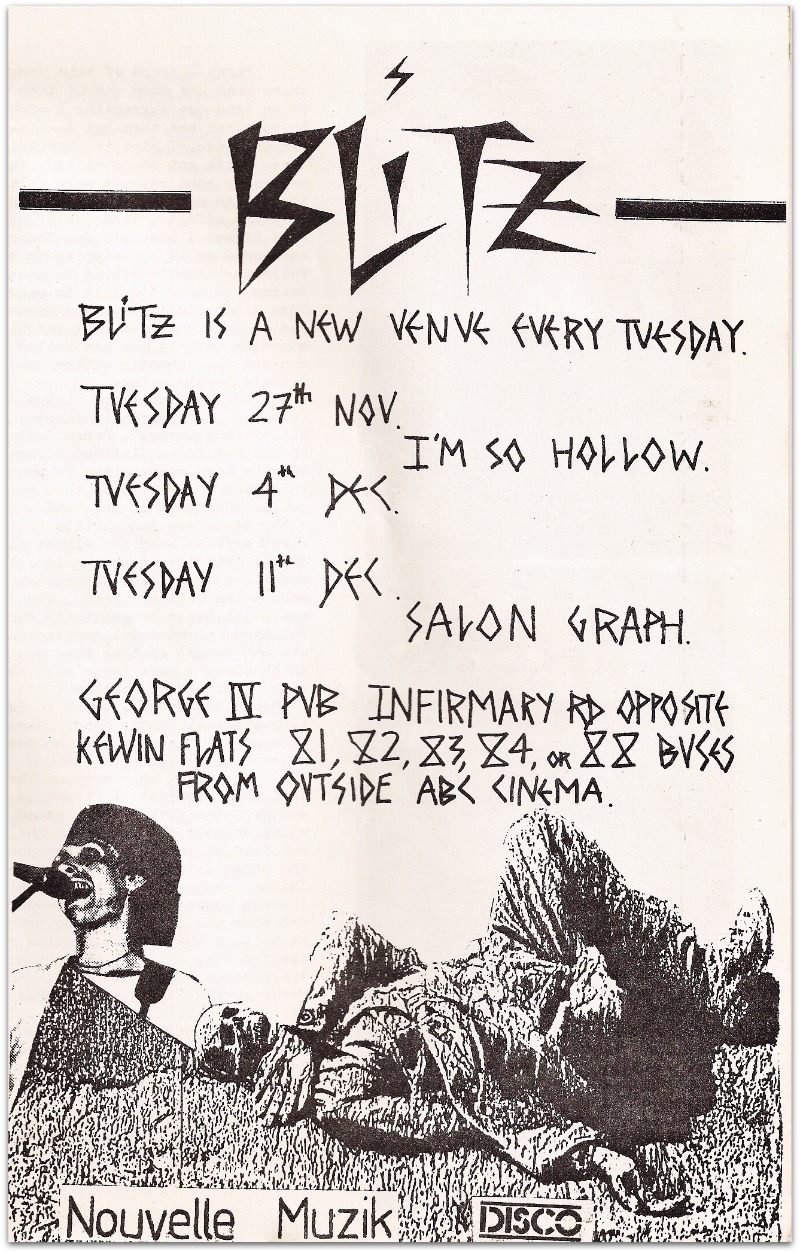 Miles away from the lairy lads and lasses who frequent the boorish Stone House and Pig & Whistle meat-markets, away from the weekend New-Wavers with their X Clothes threads and Jam shoes from Rebina, queueing for The Limit Club on Saturday night. Here we are then, far from the glassing crowd; a shower of raincoats, festooned with badges and brooches indicating musical, sexual and political preferences. Young heads freshly hennaed and hairsprayed, fashionable flea marketeers; our trashy wardrobe by War On Want.

There’s a vague Wild West feel to the room at the George IV, and in the coming months this unlikely saloon will become a post-punk Ponderosa for the local Drone Rangers and Belle Starrs. We’re watched over by Gentleman Jim Reeves, his portrait smiling down from the wall, oblivious to the crushing cannonade of not so distant drums. 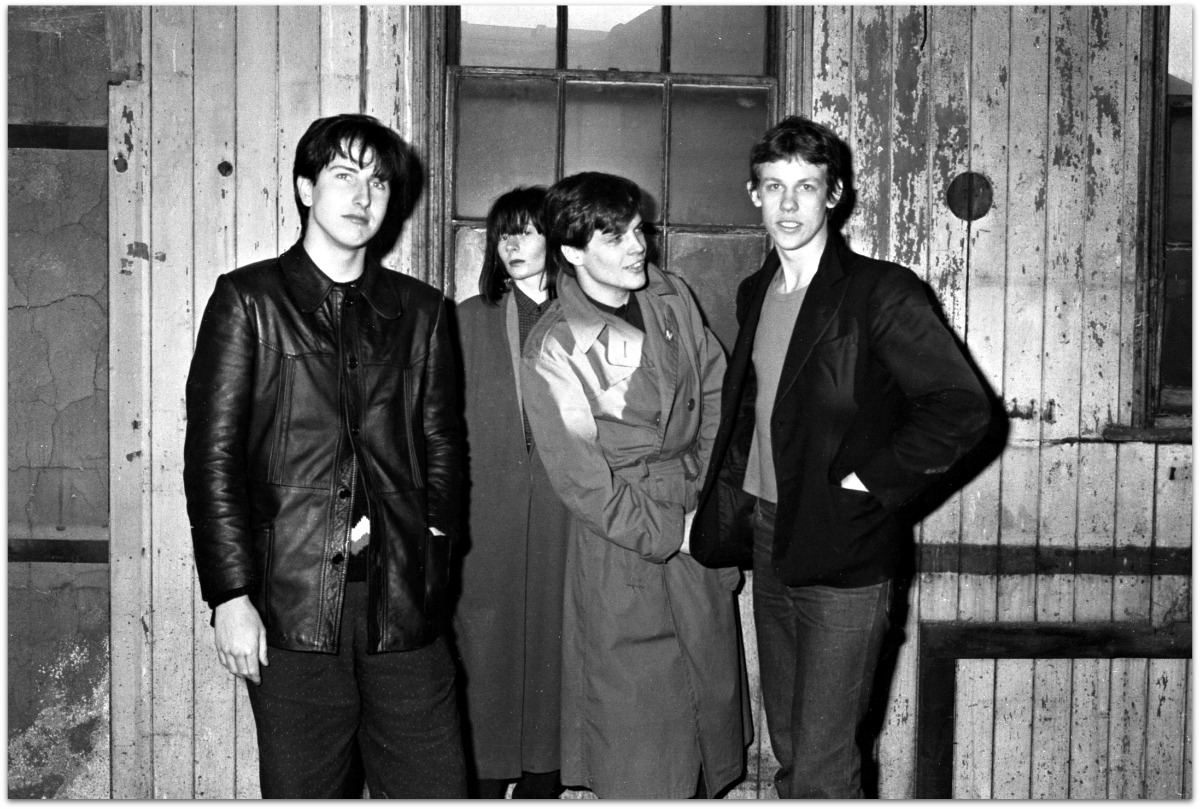 I’m So Hollow’s sticksman Joe Sawicki has a kit the size of Chesterfield. There are more drums than an oil refinery perched on the small, low stage at one end of the room, so the rest of the band are squeezed in around him. Bass player Gary Marsden is gaunt but gorgeous, I’ve never seen a picture of a young Klaus Kinski but I imagine he’d look something like Gary. Barely out in the front are vocalists Rod Leigh and Jane Wilson. Rod plays guitar, looks like a cubist painting, and sings in a droll, sardonic, nasal voice that’s defiantly and unfashionably Northern in tone. Jane Wilson, a Tushingham tomboy with a Louise Brooks bob cut – plays the appropriately named Wasp synthesiser, stinging stabs of harsh white noise. She sings in a measured, crisp, parlando; a lamb’s bleat that somehow seems to fit perfectly amidst the leonine roar of the rhythm section. The band are neatly turned out, black peg pants and muted, buttoned-up shirts is the dress code, Rod breaking rank in an unlikely chunky knit jumper.

This is the second time I have seen I’m So Hollow. I was impressed at the Penthouse Club earlier in the summer, when my friends the Stunt Kites supported them. Second time around, their songs are starting to stick, the giddy, spangled rush of ‘Fashion’, is played twice tonight. The punishing, martial tattoos at the beginning of ‘Monotony’, are a prelude to a higgledy-piggledy thrash with a Gobi-dry punchline - “I repeat, this is not a repeat” - from Rod. The seething, anti-duet ‘Touch’, thoughtcrime made flesh by Jane and Rod; shudders through the speakers, and the aforementioned, monolithic ‘I Don’t Know’, is Jane’s centrepiece. The song: dirge-like, unstoppable. The singer: unblinking, exquisite and unknowable.

We stare on, spellbound. Behind the band is a wall of mirror tiles. We watch the band, and beyond the band we catch glimpses of ourselves lost in the moment, just enough reflected narcissism to keep us warm on the last bus home. I’m surrounded by musicians, non-musicians, artists, piss-artists, students, posers, losers and drug-abusers. I feel right at home, I feel safe.

Thanks to John Blyther and Jane Antcliff.