A Thursday night in The Bee Hive pub at the top of West Street. I’m here with band-mate Charlie Collins, Richard Kirk and his girlfriend Lynn Clarke. This is their local, being just a long mic lead from Cabaret Voltaire’s studio round the corner at Western Works. Rolled up in my leather jacket pocket is this week’s NME, and on the cover is . . . Richard Kirk. 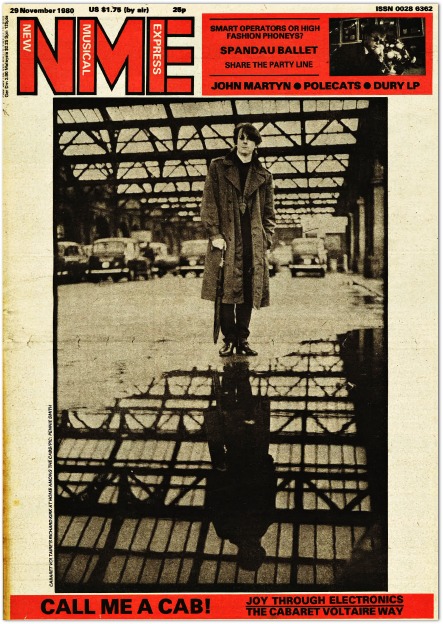 I’m a little bit star struck. True, our band has had reviews in the NME, Sounds and Melody Maker, but to be on the front cover is something altogether more impressive. I try to imagine 200,000 Richard Kirks, impassively staring down the lens of Pennie Smith’s camera, in newsagents from Penzance to Perthshire.

Richard himself, a Broomhill bohemian in black leather jacket, baggy, black peg pants and thick, cascading hennaed hair, is typically matter-of-fact, no-big-deal about it - only commenting on how brief the photo-shoot was.

“We met her at the station, she told us to stand next to some puddles by the taxi rank, she took her pictures, and then got the next train straight back down to London.”

Charlie and I leave them and make the short walk down West Street to The Hallamshire to see Naked Pygmy Voles. We’ve seen NPV before; they made their live debut opening for DVA at our Blitz gig at The George IV back in February. That night Naked Pygmy Voles played “cumis”, or possibly “sicmu”; music jumbled up into a strange, unintelligible language. Since then, head vole Tim Owen and his cohort-in-chaos Paul “P.A.” Wells have been joined by Charlie’s pal, saxophonist Martin Archer. 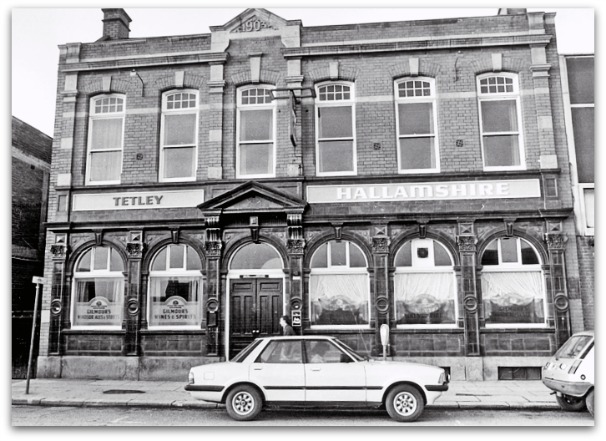 The Hallamshire attracts a younger, louder crowd than The Bee Hive. We make our way upstairs to a small function room - shabby banquette seating and arresting psychedelic cowpat wallpaper. There are about thirty like-minded souls in a venue which is becoming a regular haunt for the band, who played here back in June. NMX, Sheffield’s leading fanzine, have championed their wayward, uncompromising approach to music making. 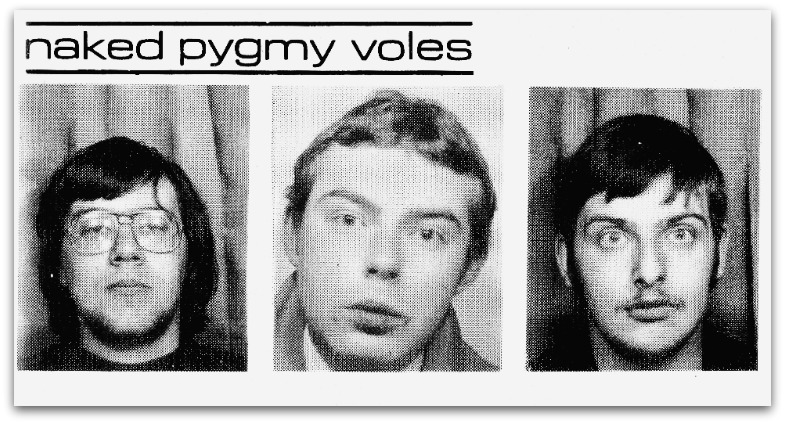 I’ve got to know Tim a bit, having been round to his Mum’s house in Wincobank for tea and tapes, and we share a mutual admiration for Cabaret Voltaire and Throbbing Gristle. By day Tim works in a bank, by night he chisels away at the impermeable, concrete slab of noise that is Naked Pygmy Voles’ basilica of bleakness. But he’s funny, and likes recording daft prank phone calls to hapless chippers and music instrument shops. He also understands the value of myth making: a “Disgusted of Tunbridge Wells” - type letter to NMX, in which “Tom Bennett of Stoke-On-Trent” fulminated about the NPV’s approach to music-making, being a case in point.

Naked Pygmy Voles don’t play songs; their music is largely improvised and open-ended. Nonetheless, I am surprised and somewhat heartened that the churning sonic cement of that debut gig has been loosened by the addition of Martin’s fruity, swashbuckling saxophone; adding vivid chalk marks to a blackboard where once only fingernails scraped. Two years ago, live exposure to this caterwauling would have sent me scurrying home to my Be-Bop Deluxe albums. However, under the tutelage of my very own wizard of weird Charlie, I have come to learn the difference between Evan Parker and Charlie Parker, I know my AACM from my ECM, and am aware that Naná Vasconcelos is not a tropical disease that targets grannies. 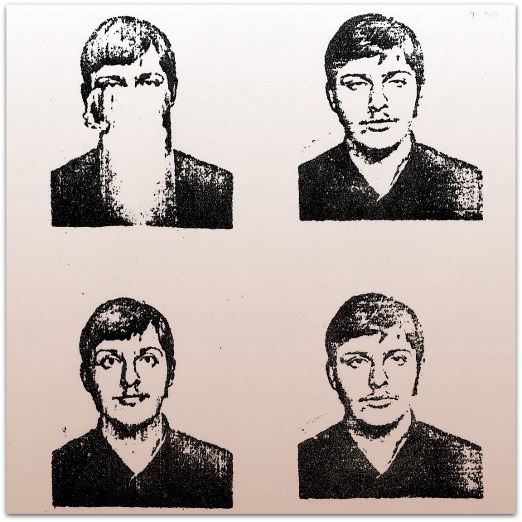 Two Floozy and The Banshees lasses, dolled up in X-Clothes PVC skirts and high-heeled boots, clatter through the door:

“Is this Debbie’s party?” says one of them, as the cacophony instantly tells her that they’ve got the wrong venue, and off they rattle back down stairs. Naked Pygmy Voles hurtle on regardless, en route to yet another caustic crescendo. Like a summer rose choking in a bramble patch, there are fleeting moments of great beauty here, if you know where to look.

Time to go home, I head back downstairs, into the thrum and chatter of the Hallamshire bar. Spandau Ballet plays on the jukebox; lads are knocking back pints, eyeing up the punky Pillsbury girls from earlier. I step out onto West Street, and it’s snowing. Despite the sound-muffling flurries, I can still hear the band, charging and snorting away – a furious, squealing wild beast lost in a blizzard of noise. 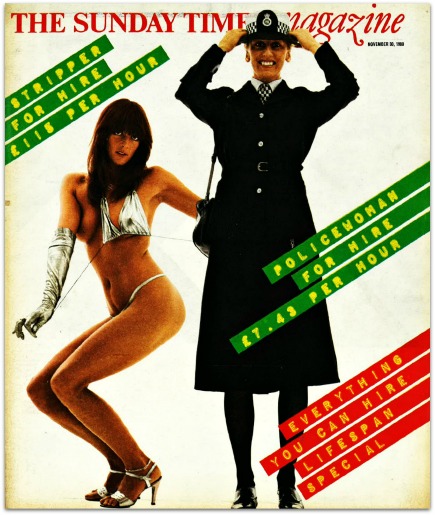 Three days later, I buy the Sunday Times. Cosey Fanni Tutti from Throbbing Gristle is on the cover of the colour supplement, looking tanned and sexy in a silver bikini. I’ve met her backstage at Throbbing Gristle and DVA gigs, so I know her too. Richard Kirk and Cosey Fanni Tutti, two people I know, on the cover of magazines within a week of each other. Our band has been busy, we’ve been away at a recording studio in Surrey: with a 16-track mixing desk, a swimming pool and catering. Guided by a proper producer, who has worked with Bowie and Queen. The album is coming out in January; surely my first magazine cover can’t be too far away?

Naked Pygmy Voles, with an augmented line-up, returned to The Hallamshire to record “Berlin Horse”, a cassette only release which came out in 1981. 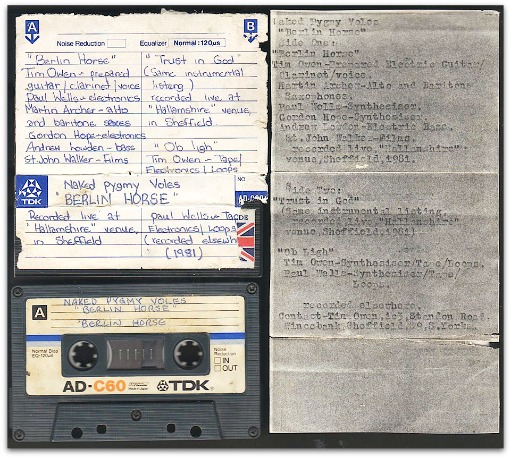 "Berlin Horse" is available to download at the Sheffield Tape Archive - https://sheffieldtapearchive.bandcamp.com/album/naked-pygmy-voles

Professor Tim Owen was last heard of lecturing on psychology at Lancaster University.

With thanks to Martin Archer and Frank Maier.