“I’ll say this for him” offers Dad, “he’s got a way with words, this lad. Eh, is that his real name – Porridge?” The album, my first long-player, rumbles away on the home Sanyo music centre. Dad is a little puzzled: “what’s a matter wi’ that singer though? He sounds like he’s in agony Roger!”
Nonetheless, I can tell he is pleased, proud even; saying to my Mum: “Aye Peg, that sixty quid for that drum set looks like a good investment now.” Mum, pouring Yorkshire pudding mix into an oven-blasted baking tin, with a metallurgist’s eye for measurement, just smiles.

The album, entitled ‘Thirst’, is released on the same day as ‘Trust’ by Elvis Costello. “Imagine if people get confused” I wonder out loud to my disinterested band mates, “and they go into the record shop and ask for ‘Thrust’!” Bass player Judd, forever skint and brutally unsentimental, has already taken his free, promo copies of the album up to Record Collector in Broomhill and has swapped them for something he actually needs - cold, hard cash.

The album is released on Fetish Records, a one-man operation run by a genial twenty-three year old Home Counties lad called Rod Pearce. Rod has released records by Throbbing Gristle and hip American bands The Bongos, Snatch and WKGB. An unflappable optimist, he runs Fetish out of a tiny two-room flat on Denbigh Street in Pimlico, rides around London on a motor bike, and is one of the coolest people I have ever met.

Like buses, you wait twenty years to release your debut album, and then two come along at once. Hot on the heels of ‘Thirst’ comes ‘White Souls In Black Suits’, a cassette-only album of largely improvised DVA performances, which Throbbing Gristle have released on their Industrial Records label. Rod releases TG and DVA, TG release DVA, there’s more cross-fertilisation going on than David Bellamy’s Compost Corner. And while Cabaret Voltaire haven’t released on Fetish, their musical and ideological ties (not to mention their pulling power) are strong enough to make them part of a bill called ‘A Fetish Nite Out’ at The Lyceum on The Strand. 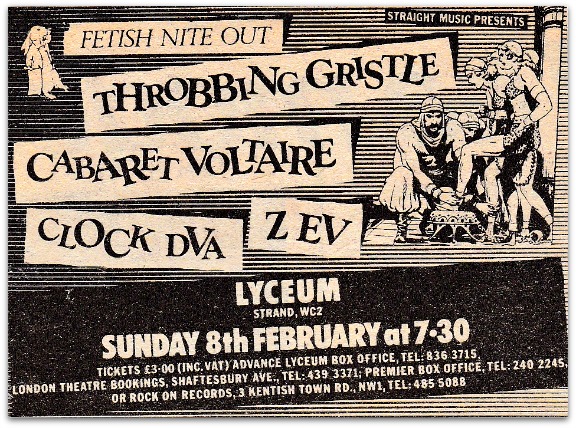 The capacious, crumbling Lyceum Ballroom, its days of hosting Gielgud’s ‘Hamlet’ and Miss World long behind it, and ‘The Lion King’ not yet a twinkle in Disney’s eye; is either the first big peak in the capital for bands on their way to the very top (U2 played here last week) or the death zone for those who have plateaued, only to be starved of oxygen from here on (Spizzles are due up next). Happily for all concerned, the big old room is busy tonight, with drinkers three-deep at the brightly-lit bar, which runs the length of a train platform along the back of the dance floor.

Though billed as the headline act, Throbbing Gristle opt to play first, to avoid having to strike their arsenal of sensitive electronic hardware from the stage after sound-check. TG’s own flyers for the gig eschewed the Fetish Records angle in favour of a self-styled ‘Psychic Youth Rally’. As a result, the first few rows gathered in front of the stage appears to be a conscripted squad of serious-minded young men with buzz-cut bullet-heads clad in Millet’s militia chic. 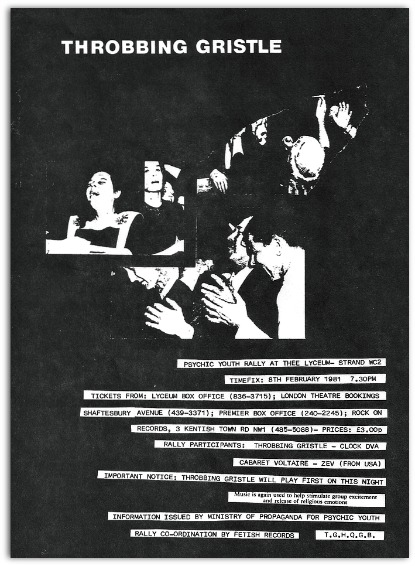 TG start in almost total darkness, suspenseful Hammer Horror gothic organ notes, Genesis’ harpooned wail-song and juddering electronic blips reverberate out across the Lyceum, the mournful cries intoning a unique Sunday vespers. He beats a drum and begins an incantation - like the chanting of Gyuto monks, it builds in intensity. His words, particle-accelerating, blur into an echoing loop.

The mood changes, the lonely beat of the last battlefield drummer standing endures, Geiger counter clicks and rude fuzz bass disturb the air. This is Throbbing Gristle at their most yielding and malleable. Beat-by-beat, the maul of sound grows once more, Genesis growing agitated as his moans turn to chants, chants turn to shouts, and shouts turn to screams. Some kind of Berber music appears in the melee, conjuring up images of William Burroughs in Tangiers. This is searing, scouring, all-consuming machine-music, and my favourite live experience of TG thus far. 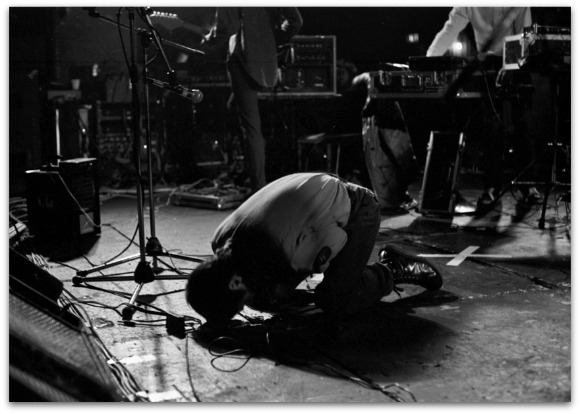 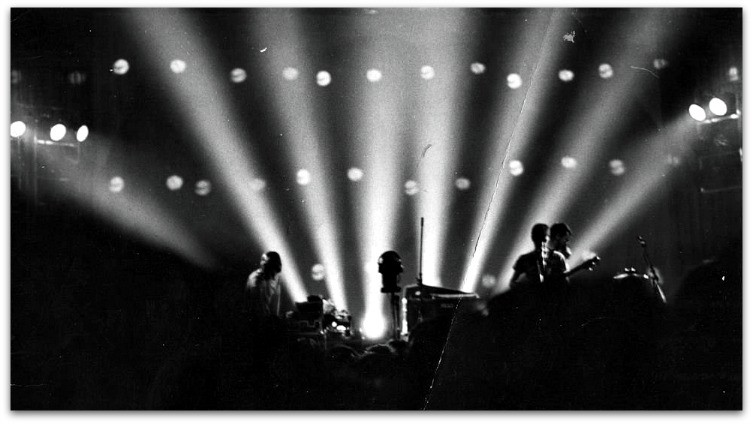 After almost half-an-hour, Throbbing Gristle finally kill ‘Discipline’. Having constricted the audience with the hypnotic first half of their set, the band retire, they’ve devoured the Lyceum in one muscular, jaws-agape Boa swallow.

Today is Z’EV’s 30th birthday. Originally from California, he is another of Rod Pearce’s NYC industrial art-rock connections. He’s ten years older than me, but with his shaven head, scarred, sinewy body and aura of Zen-calm, he reminds me of one of the old monks from the “Kung Fu” TV series. More performance artist than musician, Z’EV performs with beer kegs with clappers inside them. He throws these monstrous cylinders, some tethered to him with chains, around the stage. Having impressed at sound-check, he starts off strongly in front of a somewhat baffled audience who are still reeling from TG’s assault. Like Samson tossing the pillars of the temple asunder, the dexterous fury with which he manipulates these clattering barrels is impressive. Particularly as he draws on a cigarette, clamped tight between his lips, throughout his performance. Metal sheeting is vigorously shaken for a thunderous wobbling sound. Sadly after some time, jet lag kicks in, and the bible hero suddenly looks more like a knackered rag and bone man, angrily chucking scrap into the back of the lorry.

We play next. Even the roadies are excited. We have real instruments - guitar amps, a drum kit and saxophone mics - to set up and check. “One-two, check one-two.” Our prickly, coal-bunker funk: actual songs with verses and choruses, and a beat you can dance to, is the closest thing to traditional rock music on the bill tonight, and we seem to go down well. 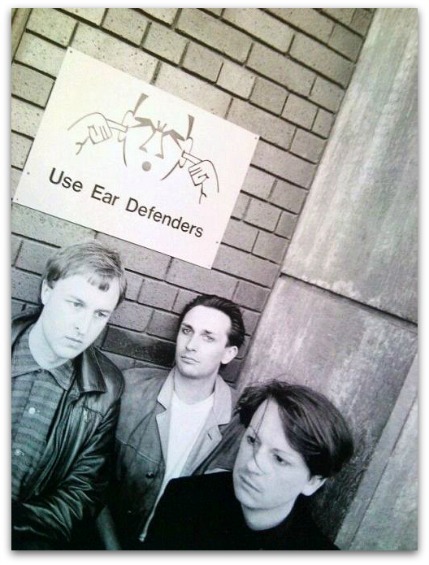 I miss a cameo from Boyd Rice as I’m packing my drum kit up, but manage to get back out front for the start of Cabaret Voltaire’s set. They kick-off with a new song called ‘Taxi Music’, which has a caffeinated, Latino dance beat. It takes a long time to get going, almost as if they have technical problems onstage. While Mal gamely peeps on a whistle, making him look like a cross between a Canvey Island soul-boy and NYC’s louchest traffic cop, ‘Taxi Music’ mostly idles at the rank without really going anywhere. Recent single ‘Seconds Too Late’ fares better, with its eerie, Captain Scarlet battles The Mysterons on the Trans-Europ Express moodscape. On a night so far dominated by new, uncompromising music, the Cabs also show no sign of pandering to the crowd. So there’s no ‘Do The Mussolini’, no ‘Nag Nag Nag’; although they do relent briefly with the eldritch shimmer of ‘Kneel To The Boss’ from ‘Voice Of America’, before departing with the brutalist, thug-beat iteration of another lengthy new song called ‘A Thousand Ways’.

The audience file out: frazzled and deafened, their senses overloaded. The lads in army surplus fatigues have endured an aural assault course camouflaged as a pop concert. I’m also fried, and probably shouldn’t be let anywhere near a mic and tape-recorder. Nevertheless I find myself doing an interview with BBC Radio London, much to the amusement of my band-mates, who snigger as I tie myself up in pretentious knots:

“I mean, I see our music getting bigger, adding a horn section, a percussionist, like Talking Heads. On the next album, I might not use cymbals at all, strip it right back, sort of evolving and devolving at the same time, y’know?”

Later, after I’ve been poured into the van, and we stop for sobering mugs of tea and games of Galaxian at Toddington services, does my head eventually pop back out of my arse.

After a few hours’ sleep, I’m back at work. I bet Z’EV isn’t blankly searching for missing microfiche files; he’s probably meditating or maybe getting a new piercing. Compared to him and his total commitment to his cause, I know I’m a tenderfoot – still living at home with Mum and Dad, sensible office job, looking to settle down like my older brother and sister before me. We are a level-headed family, no Quail ever ran away to join the circus. At least not yet.

Remembering Rod Pearce, who was murdered in Mexico in 1997, aged 39.

Thanks to Simon Dell, Charlie Collins and Paul Widger.

Special thanks to Akiko Hada, whose excellent photo archive can be enjoyed at http://www.bunnies.de/akiko/Music/