“So, thanks to all at once and to each one, whom we invite to see us crowned at Scone.”

“But Sir, it says ‘Scone’ here, you could pronounce it ‘Scon’, if you’re posh. You’re not posh are you Sir?”

Rehearsals for the school production of ‘Macbeth’, and this “Warhol / “War-hole” exchange takes place with English teacher Mr. “Call me Chris” Hoggart. I like him; we’ve studied the lyrics to Bruce Springsteen’s ‘Born To Run’ in his class, even though Post-Dylan Singer-Songwriters From New Jersey is not strictly on the curriculum. Another class with Mr. H simply consists of listening to Pink Floyd’s "Atom Heart Mother". This is progressive education in every sense.

“What have you got this afternoon?”

In ‘Macbeth’, I’ve been cast as Malcolm. I’m happy with my role as the murdered king Duncan’s son and heir. I hot-foot it down to England when it all kicks off, raise an army, come back dressed as a tree while my mate Wilma (playing Macduff) slays my other mate Timbo (playing Big Mac), and I get to be king, centre-stage, all eyes on me, at the end.

I also get what Mr. Hoggart assures me is the hardest line in the play.

When Macduff tells Malcolm his Dad has been murdered…

I’m determined to give this my best. Macduff / Wilma feeds me the line

“Ohhhhh… buy, whoooooom?” (Fall to knees, stare out into the fifth row, try and remember my seven times table). I’m digging for gravitas; but what comes out sounds like a badly winded owl.

Strigidae impressions aside, Firth Park Comprehensive’s 1979 production of ‘The Tragedy of Macbeth’ by William Shakespeare is a resounding success, and runs for three sold out nights in March. True, we can never hope to emulate the gory excess of Roman Polanski’s 1971 film, which we saw three years ago at the Cineplex for ‘O’ level studies; a thrilling combination of copious ketchup, unabashed nudity, The Third Ear Band and Keith Chegwin which is instantly seared on my sixteen year old consciousness forever.

‘Macbeth’ is The Bard’s shortest play, which suits us just fine as it allows for more drinking time after curtain down. We're in the nearby Sicey pub, revelling in our thespian glory. Still smudged with kohl and pan-cake, I return from the bar to catch the punchline to band-buddy Banquo / Vinner’s tale of a disgruntled Skegness confectionery maker:

“So he walked out, but before he left he set the machine to produce half a mile of FUCK OFF rock!” 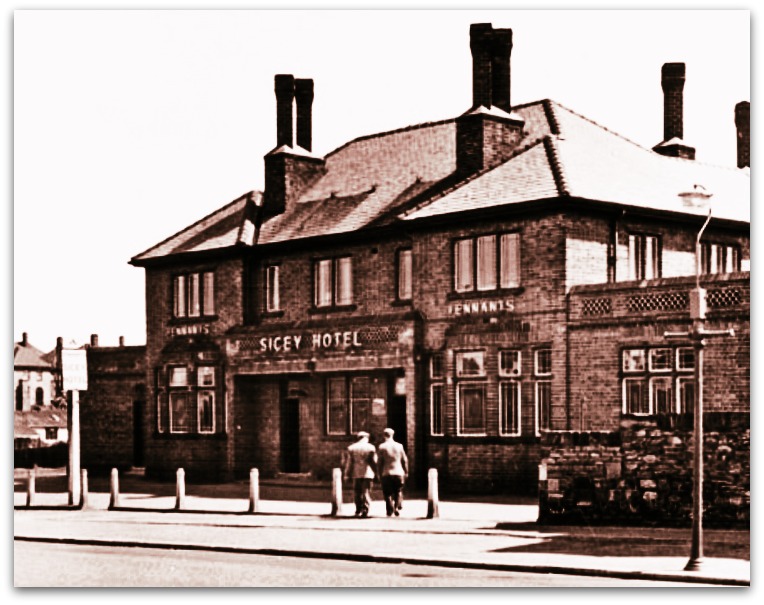 With the roar of the greasepaint and the smell of the crowd still infusing our senses, it’s only natural that our wrap party should continue at Sheffield’s premier night spot for jumble sale chic sixth-formers – The Limit. 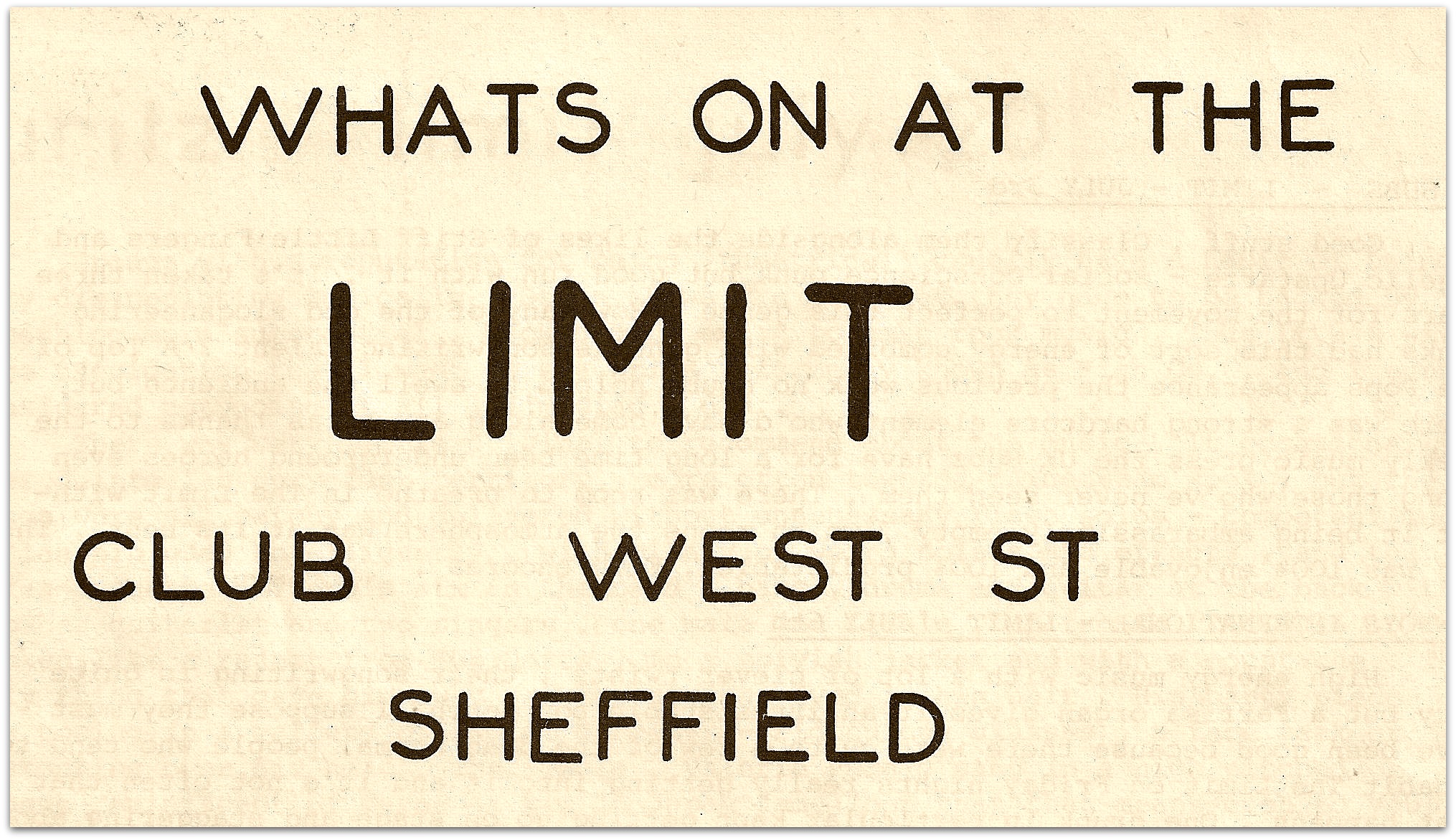 A 47 bus ride later, the good companions are standing outside the West Street venue, considering a poster.

We’re not sure who or what Zaine Griff is, but the promise of that perennial stalwart of the undercard “late bar” draws us down the steps into the basement with the pull of Jupiter.

Thursday night’s crowd is the now familiar mix of scruffs, straights and students; scattered kindling hoping the weekend will catch fire early with a few late pints and maybe a pull. The deejay is spinning the latest New Wave hits – “Oliver’s Army”, “Heart Of Glass”, “Stop Your Sobbing” – our little island of musical sanity in an ocean of Gloria Gaynor, Gary’s Gang and Leif Garrett. As a huge Be-Bop Deluxe fan, I’m delighted to hear Bill Nelson’s “Furniture Music” shaking the PA system, but perplexed to hear the DJ call the band “Billy Preston’s Red Noise”.

Zaine Griff, who turns out to be a man, is up on the low stage. Originally from New Zealand, he’s slim and sleek, blessed with Mount Rushmore cheekbones, Angel Falls henna’d bangs, and a rapier slash of lippy. He stalks the space from side to side, hectic, kinetic, a pretty boy panther behind invisible bars. His band are henchmen from the rock ‘n’ roll trenches who know their place, popping above the parapet for a solo or a flurry only to scurry back to the shadows once their ammunition is spent. 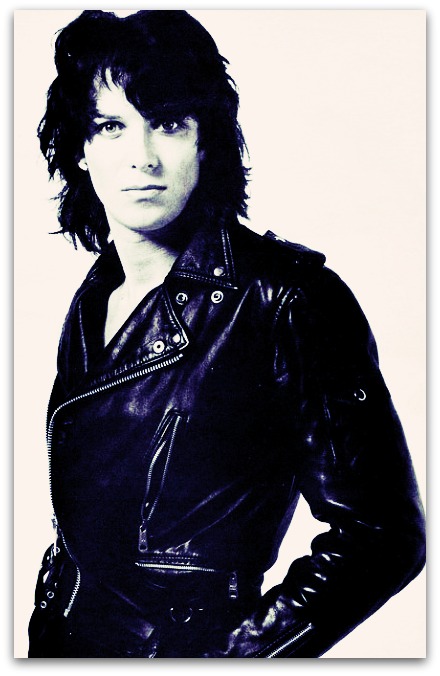 “This one’s called ‘The Scandinavian’”

Zaine Griff plays chunky, post-punk, synth-rock, his songs stringent in their adherence to the New Wave rules, nothing exceeds three minutes thirty seconds duration. Musically he lives two doors down from John Foxx’s Ultravox, with whom he shares good bone structure and some androgynous charm. Punk-meets-Pierrot, not unlike Snips who we saw here last year. Lyrically he walks in the shadows of the tall trees planted by Bowie and Ferry on Unter Den Linden and Les Jardin des Tuileries. A romantic, yearning vision of continental Europe; old-world postcards sketched by an Antipodean hand.

We’re a blasé crowd, here for the beer and a leer. This kind of Apathy-In-The-UK is nothing new to Griff and his seasoned cohorts; with one hundred and fifty gigs behind them; they know which buttons to push to get even the most lackadaisical crowd moving. A string of solid songs: “Tonight”, “Run”, the galloping she-male romp of “She’s My Man”, all delivered with a spiky amphetamine crunch; eventually get the adrenaline pumping. In the addled eyes of our young gang, fuelled by theatrical dreams and Ayinger Bräu lager, this Kiwi takes flight tonight. The deejay, with no little irony, cues up “Heroes” as he leaves the stage. 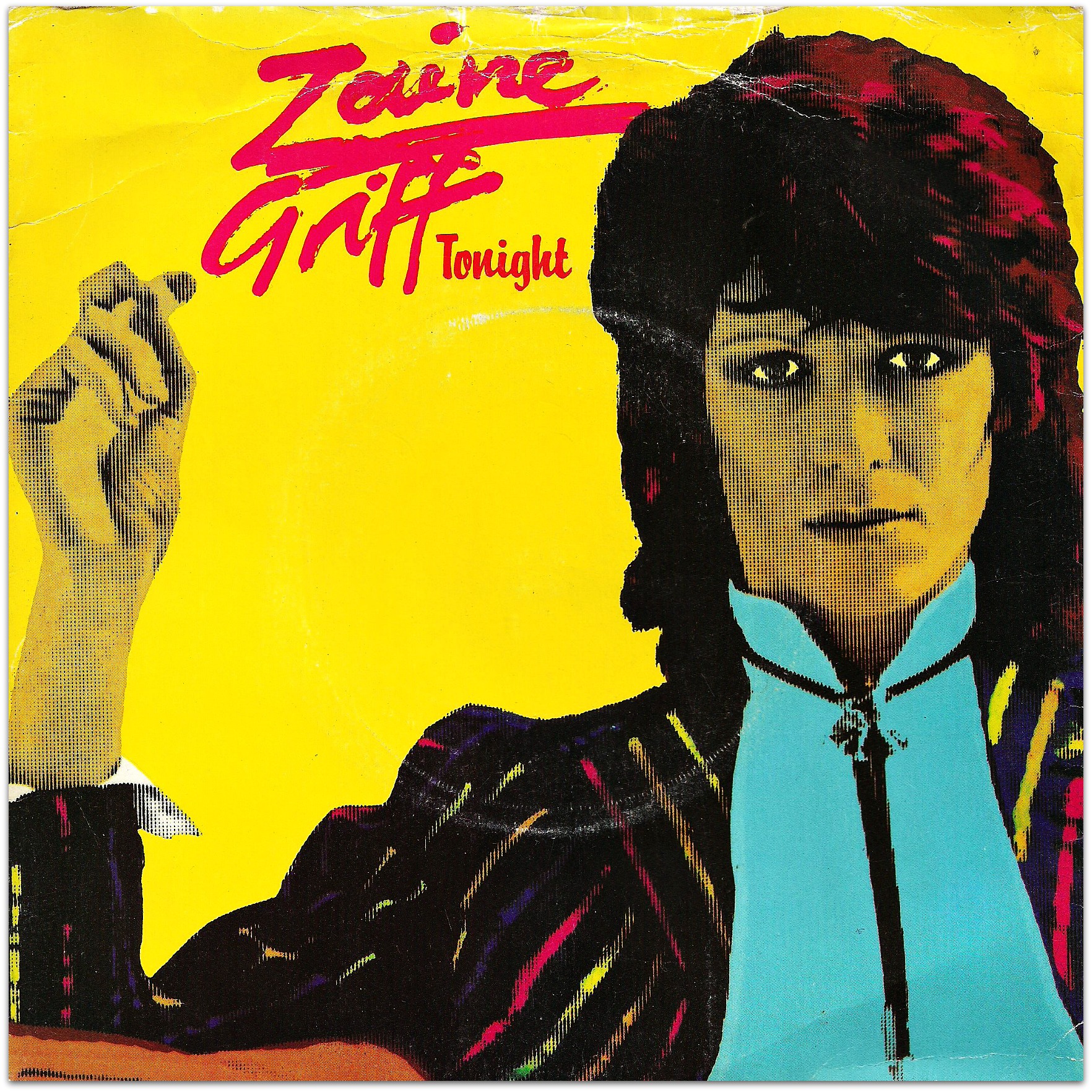 Afterwards, Vinner and I get talking to him. He’s been living in London since he was a teenager, younger than we are now. Paying his dues in bands we’ve never heard of, but he seems well connected, he knows Ray Davies from The Kinks and the singer from Manfred Mann’s Earthband. Zaine Griff seems committed to his art, and to becoming successful, in a way we can’t really start to imagine.

Moving 11,000 miles away from home,alone, is unthinkable to local lads like us. A recent day trip to London with our British Constitution class left my head spinning as I witnessed the capital’s constant surge. Our band,Exit, has yet to play live in 1979. Amps are cold and drums hushed, as outside forces and life’s realities start to take hold. A-level exams, further education, serious girlfriends and parental expectations assemble like the arboreal army of Birnam Wood, ready to march on Dunsinane, the last outpost of adolescence.

We’re getting on great with Zaine (Glenn Mikkelson to his Mum) until Vinner asks him what we’ve all been thinking:

“Do you mind looking like David Bowie or do you just get sick of people telling you so?”

With this, he sighs and rolls his eyes, scanning the skies in the hope that some tall Venusians passing through will whisk him away from these inebriated oiks. Mercifully, the roaring intro to “Into The Valley” fills the room, tearing us away to the dancefloor to execute our best Drunken Scotsman In A Wind Tunnel routine as pioneered by Richard Jobson on Top Of The Pops.

It’s late now, rather than the usual last record of the night – “Take It To The Limit”, it’s “Rikki Don’t Lose That Number” by Steely Dan that purrs through the speakers, all twinkling Blue Note cool and measured, mordant LA wit. It’s oddly sobering, I don’t know Rikki, and we don’t even have a phone at home; but the last night bus leaves High Street in five minutes and I know I should be on it.

Zaine Griff released his debut album ‘Ashes and Diamonds’ in 1980. It was produced by Tony Visconti, best known for his work with David Bowie. Featuring a young Hans Zimmer on keyboards, it was not a commercial success. 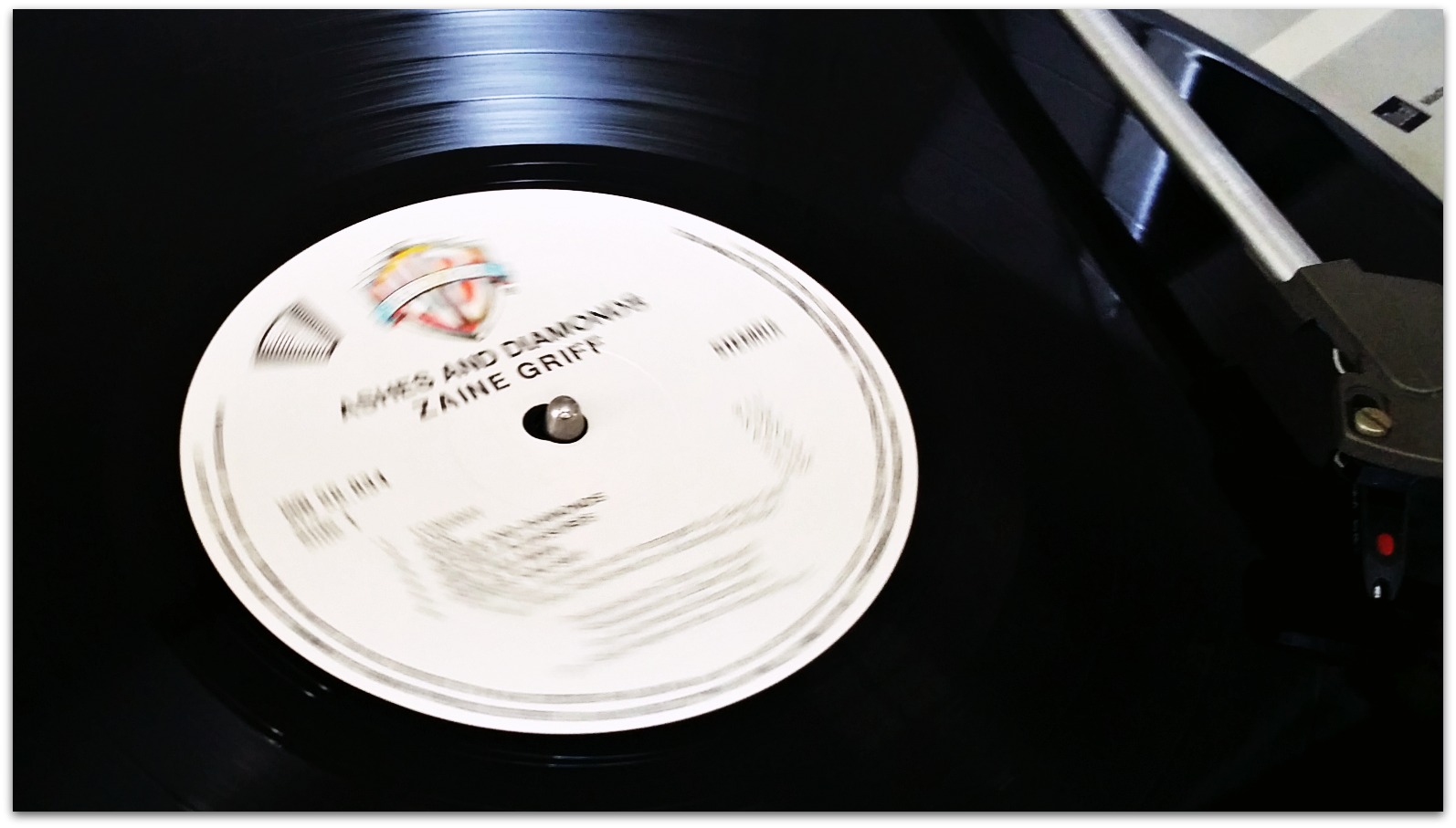 You can listen to 'Ashes and Diamonds' on Spotify here.

A second album – ‘Figvres’ – followed in 1982. Zaine Griff returned to New Zealand soon after, he released his third album – ‘Child Who Wants The Moon’ in 2011.