“Someone said to me the other day”, relates Judd, “Y,know, the trouble with Sheffield is, it’s just a one-eyed raincoat town.”

Brothers-in-rhythm in the band, we’ve bumped into each other outside W. Hartley Seed, Sheffield’s book retailer of note. Me killing time before yet another job interview, Judd on his way down West Street to sign on. I’m wearing my hideous bottle-green interview suit, its lapels wide enough to land a Jumbo on, with flares flappy enough to re-upholster economy class. Clad in dyed-black combats, scuffed monkey boots and fashionably knackered leather jacket; Judd is kind enough not to comment on my Man At C&A apparel.

“There’s a book in there I want, but I haven’t got the money.”

“Tell yer what, I’ll go in and nick it, and you give me half the cover price?”

Stephen ‘Judd’ Turner: bass player, petty pilferer, walking chemistry set, Iggy Pop lookalike. Described by NMX fanzine, with uncanny accuracy, as a “friendly hard man”. A good man to be on the same side as. And there’s a kernel of truth in his observation about our town; the long grey raincoat and floppy forelock has become visual short-hand for serious young musician from Sheffield. Enough for South Yorkshire to be renamed Gabardineshire and start its own fringe festival. 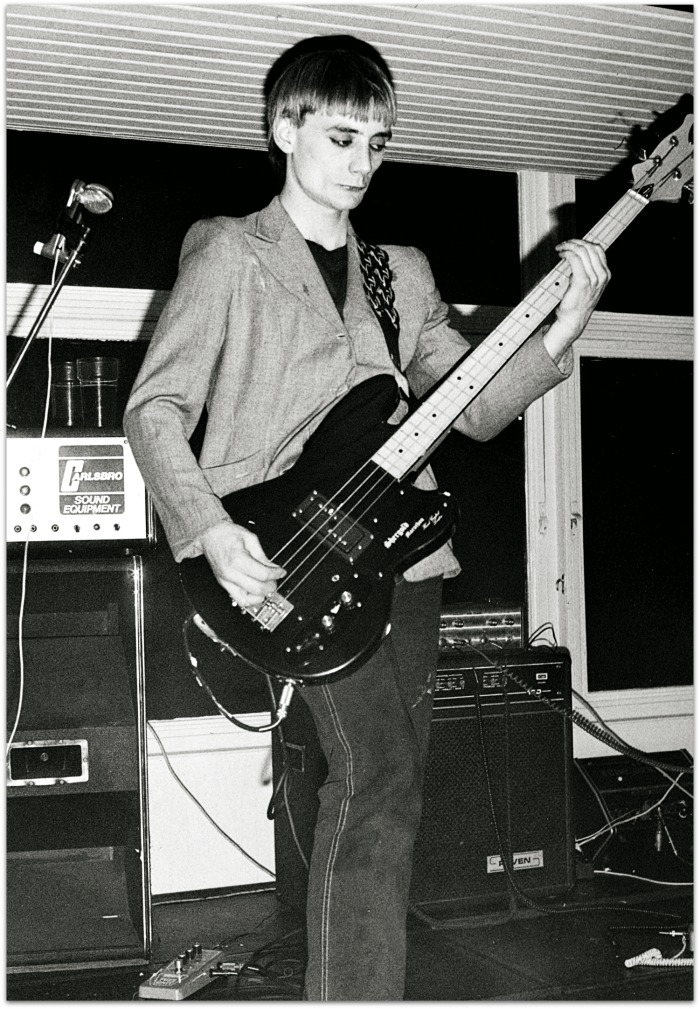 Since Cabaret Voltaire and The Human League sailed the good ship Revox into the uncharted waters at the periphery of pop, with just the steady pulse of a drum machine for their soundings, a motley flotilla of bands have followed in their tempestuous wake – inevitably, not all of them with the same flare for musical and visual innovation. So for every I’m So Hollow or Vendino Pact, there are three Cardboard Criminals or Stranger Than Fictions. Salon Graph are outflanked by the serried ranks of Shy-Tots and their ilk. Post-punk with a slow puncture, new waving but drowning.

One band determined to escape the Gannex annex is Vice Versa. I’m a fan, having bought their debut “Music 4” EP from Revolution Records last year. Since then they’ve shrugged off the Human Non-League jibes from the local hipsters to emerge with their own take on the drummerless trio. Also, unlike so many local bands who spend endless nights in The Hallamshire mulling over what might happen, Vice Versa have a plan. Better still, they have a manifesto.

“The use of prepared tape montages and ‘pre-sound’ in performance allows space to exploit kinetics and transmit electronic dance beat music. The aim: to provide a soundtrack to the second industrial revolution. The
method: extending the miniaturisation policy to ultimately become the first attaché case commuter band.” 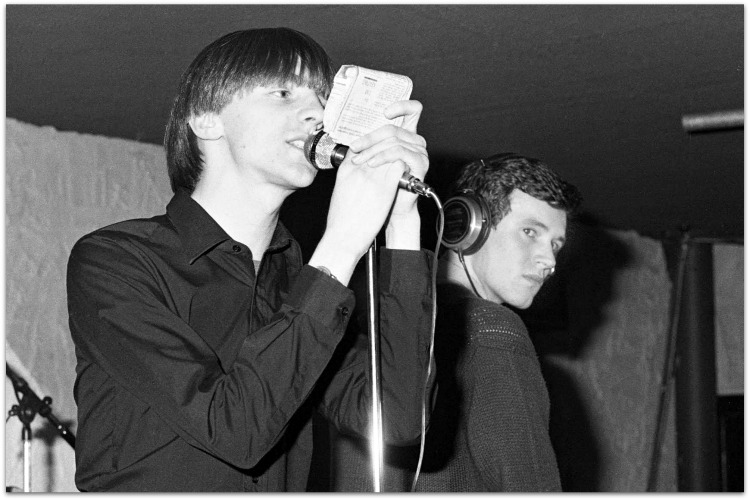 Founders Mark White and Stephen Singleton have started their own label – Neutron Records – to release their music. I’ve got to know them a little, two T. Rex fans who understand that with pop the curves on the bottle are as important as the fizz inside. Hence the debut release by these budding Berry Gordy’s comes in an elaborate fold-out poster sleeve, and their next release on Neutron is a 4 track EP which showcases a quartet of local bands: I’m So Hollow, Clock DVA, my old school pals the Stunt Kites and Vice Versa themselves. “1980 – The First Fifteen Minutes” is released in February and the first pressing of 1,000 - complete with fold-out sleeve, postcard and product catalogue - sells out immediately. 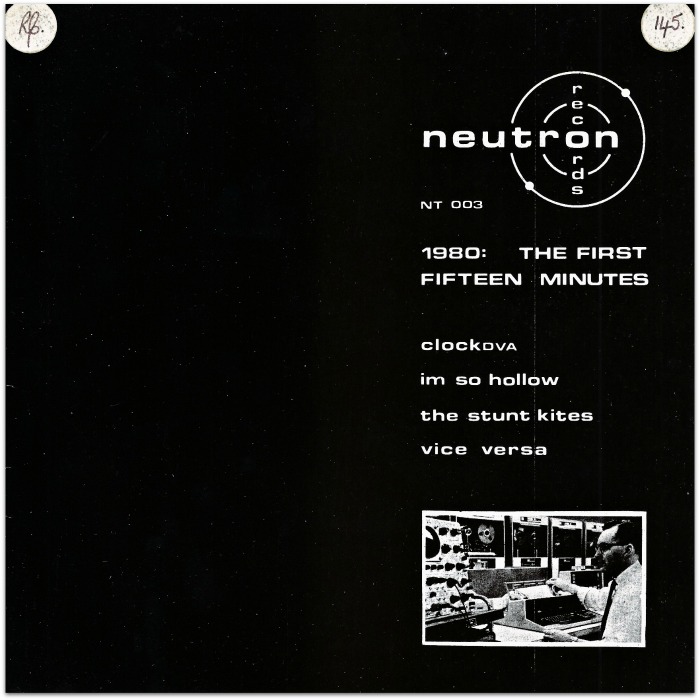 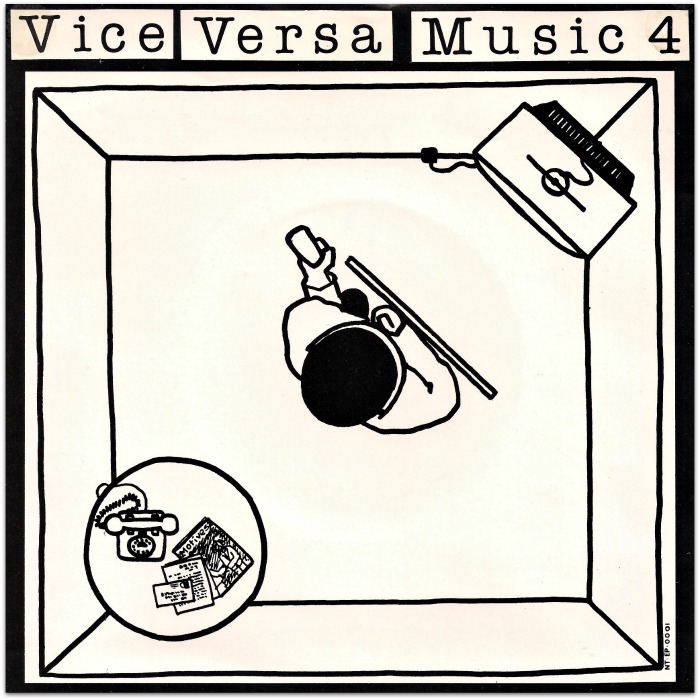 Mark and Stephen have recently been joined by Martin Fry, who I’ve got to know reasonably well through Clock DVA. He’s good company, genial, lanky and forever cloaked in an enormous leather coat, which appears to have last seen service in the cockpit of a Sopwith Camel. He’s generous too, lending me the first albums by The Doors and Talking Heads within an hour of our first meeting.

“I think he’s just swallowed a thesaurus and a typewriter roll”. A fanzine writer himself, Martin gives short shrift to the NME’s new riders of the purple ribbon. Having initially gone along to interview Vice Versa, he ended up joining the band. 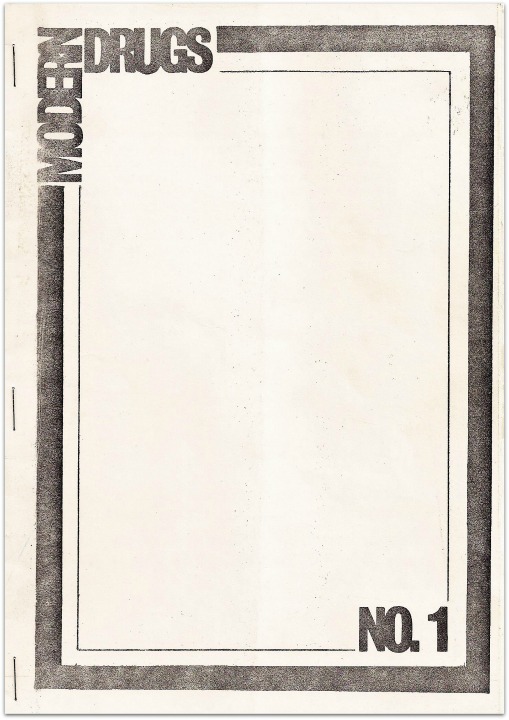 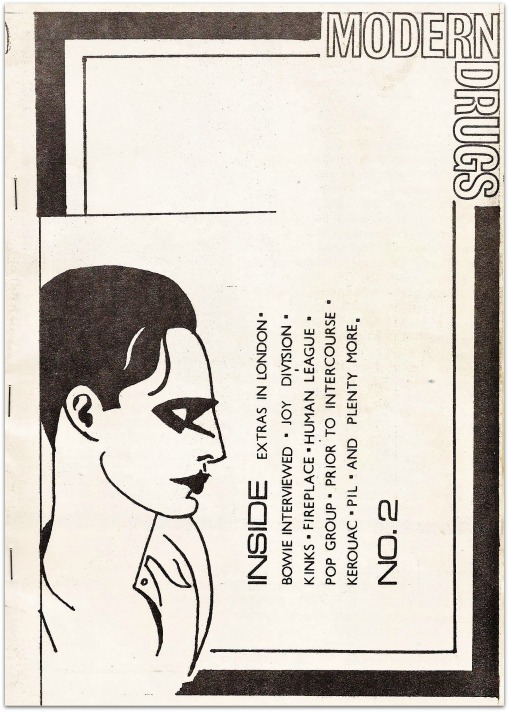 The first time I see this line-up live is at my beloved Blitz club. It’s been a patchy Spring season so far upstairs at the George IV: the brooding Comsat Angels are worth seeing for the towering ‘Independence Day’ alone, while Artery entertain and infuriate in equal measures, Mick Fiddler stealing the show with his saucer-eyed, scatterbrain charm. 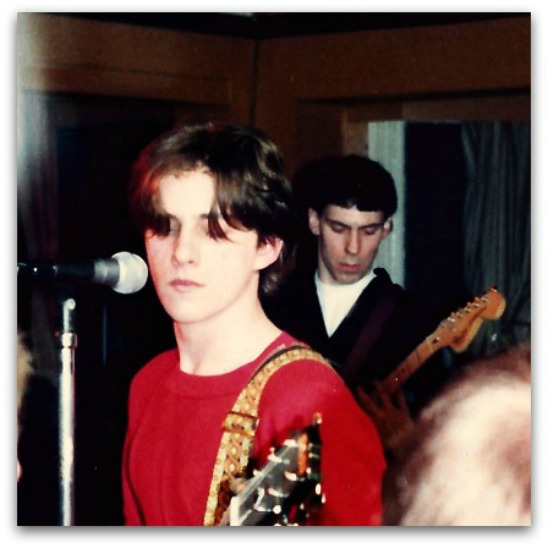 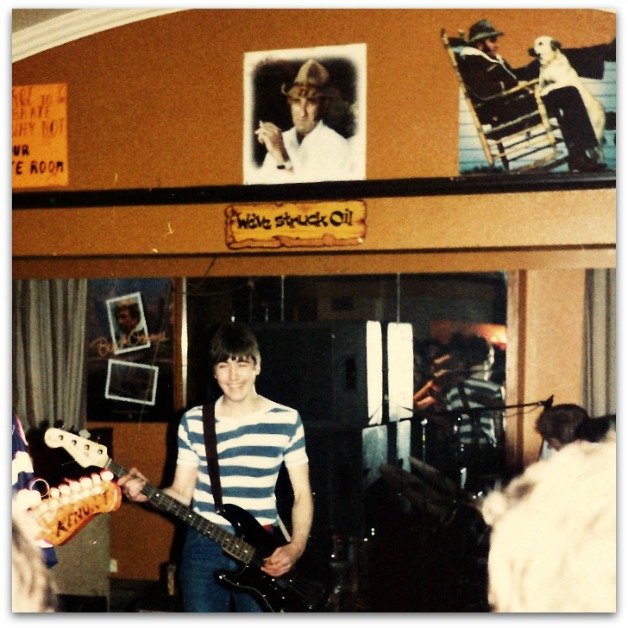 "Home, home on the range, where the Scarborough Antelopes play..." Big Don Williams keeping an eye on proceedings at the Blitz club 25th March 1980. Photo courtesy of Jon Downing.

Charlie Collins and I are supporting Vice Versa; we’re billed as the Clock Duo. Charlie is the bearded, avuncular saxophonist in Clock DVA, having joined shortly after me. In a band that sometimes resembles the Research & Development division of a Big Pharma company, Charlie’s addictions to Guinness, test cricket and free jazz seem more appealing to me, and so I happily enter his orbit. 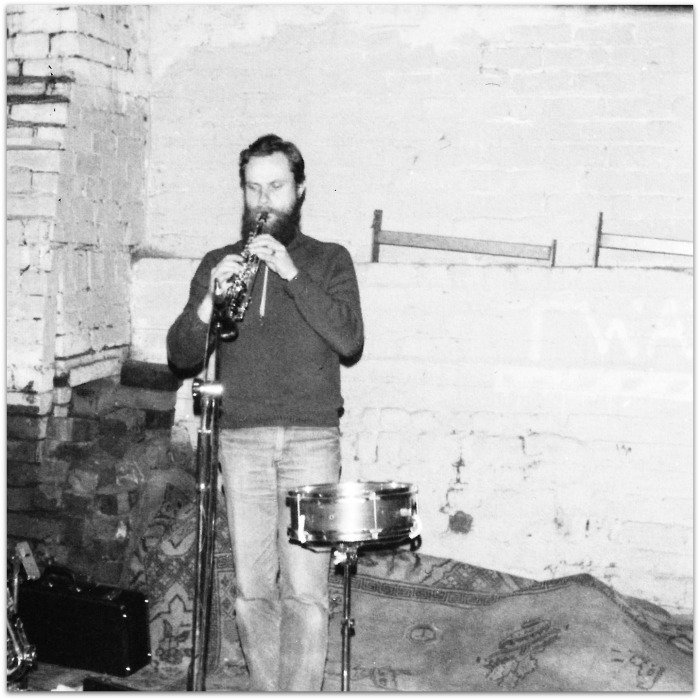 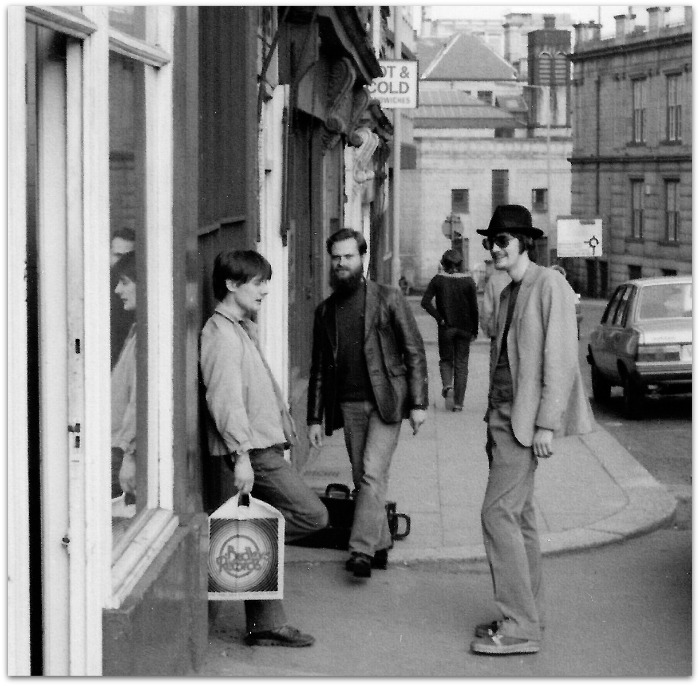 Judd, Charlie and my friend Vinner. West Street, May 1980.

Out go my Be Bop Deluxe and Pink Floyd albums, in come Ornette Coleman and the Art Ensemble of Chicago. We’ve prepared a twenty minute piece for reeds, percussion and effects, and we unleash this two-headed hydra of wonky skronk onto an unsuspecting, slightly bemused Blitz club crowd, who aren’t sure if it’s part of some extended April Fool’s Day prank. 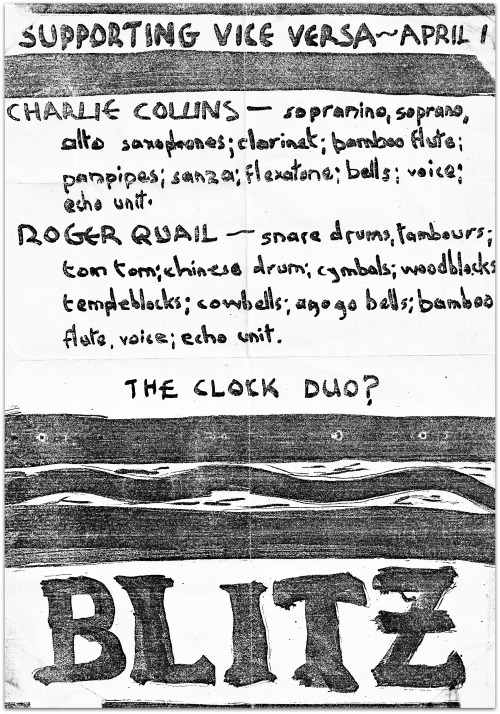 “Everyone takes a cut of your fee at The Limit, people with totally ridiculous jobs like plectrum polisher.” – Martin Fry. 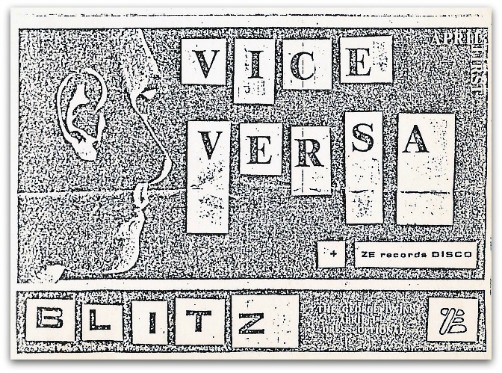 An in-at-the-deep-end tour with Virgin new wave hopefuls Cowboys International has given Vice Versa some confidence, enabling them get their band-in-a-briefcase modus operandi down pat: Korg, Wasp and three mics. Frontman Mark White is centre stage on his eighteenth birthday, a hectic collision of excitement and nervous energy. His gyroscopic swivel dance one-part Battling Tops, one-part Young Soul Rebel. To his right, Stephen bounces on an invisible trampoline, threatening his synth with karate chops, occasionally worrying his alto sax with some splenetic, goose-chasing flurries of sound. Across the stage, Martin swats away at the bad-tempered Wasp, while he goes full Wigan Casino from the waist down.

The Korg should be sponsored by JCB; it’s doing all the heavy lifting here. The power-ball kick drum, as urgent as a heart transplant in transit, pumps away relentlessly, as the eager trio ratchet up the racket. Vice Versa understand the sheer primitive joy of a shouted, Kop chorus – “Che Guevara, Che Guevara, Che Guevara!” in the Glitter-beat ‘My Idol’, or the righteous yelps of “Soul power, soul power” in their northern soul tribute ‘Democratic Dancebeat’. The switch-blade menace of ‘Stilyagi’, celebrating Russian teddy boys, changes the mood, but still manages to gouge itself into the memory with its multiple “rebel gang” hooks. The ranch-themed room is packed to near capacity; boys dressed by Barnado’s, girls clad in A-line hand-me-downs. Tomorrow the band will be back at work, dead-end drudgery at the gas board and Batchelor’s Foods, the persistent buzzing in their ears the only souvenir of a memorable gig. 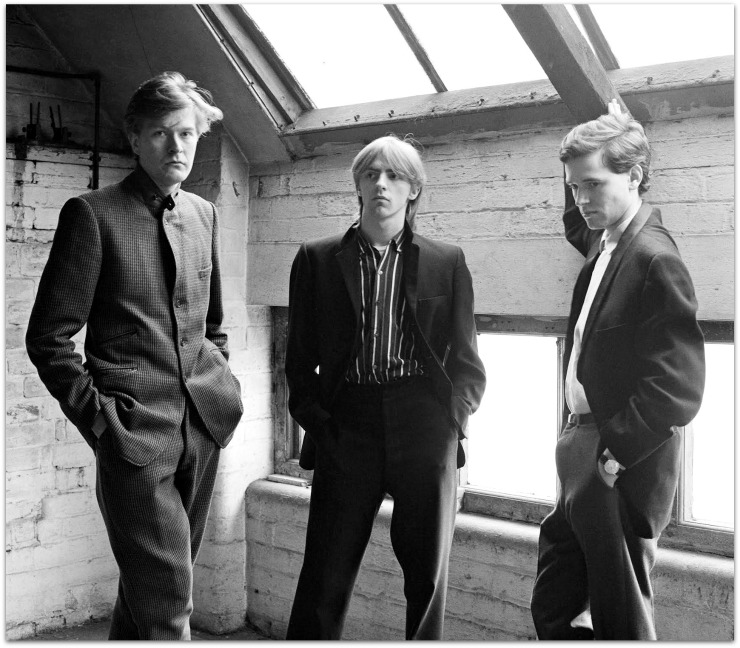 I see Vice Versa again just five weeks later at the same venue. Dutch electronic band Minny Pops fail to turn up, so promoter Disco John asks the trio to fill the slot. While tumbleweed doesn’t quite careen across the dance-floor at our little home on the range on Infirmary Road, it’s a quiet enough night, with only the most dedicated prairie dogs and Texas roses in attendance. The band’s ultra-catchy songs are starting to stick in my memory. They are fully committed, lost in joyful reverie, as they hammer out their fashion icon paean ‘Modern As In Mary Quant’ (“the more you see the more you want.”)

They close with a song called ‘Jazz Drugs’, another fast-moving Polaroid snapshot of a stylish scene or movement which is fast becoming their trademark. Under Charlie’s tutelage, the sound and the look of new heroes like John Coltrane and Archie Shepp is influencing my world-view, and the song’s lyrics resonate with me:

No jugular riff can ever explain

The sound of a song with a jazz refrain. 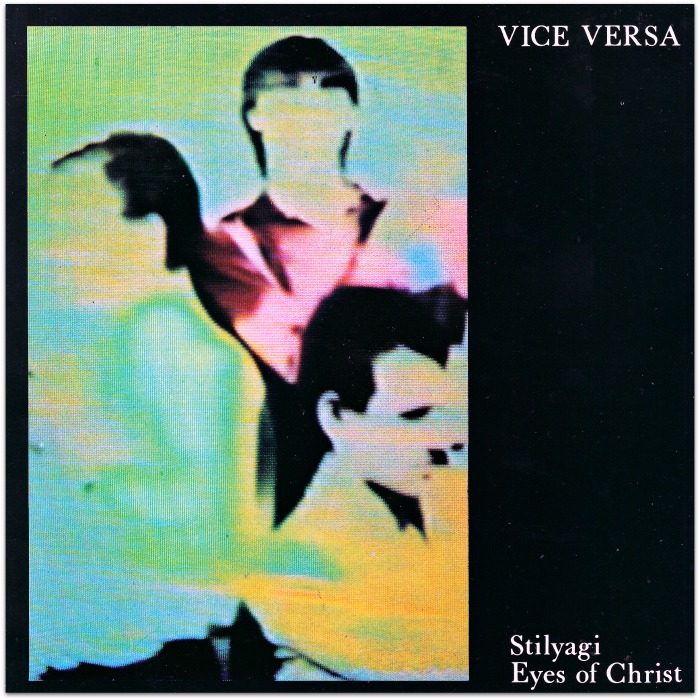 Spool the reel on a couple of months and Clock DVA and Vice Versa are sharing the bill at The Moonlight Club in London. We’re nine young men in transit in a Transit van, inside which John Foxx’s hit ‘Underpass’ is refashioned with irreverent glee as ‘Underpants’. Martin, meanwhile, is on a roll concerning the coming of clown-rock:

“Slapstick is the next big thing; Bowie’s next tour is under the name of ‘David Bowalski’. During a number like ‘Wild Is The Wind’, a roadie on a unicycle pours water down Bowalski’s big baggy pants.”

Apart from a minor squabble about who plays first (we prevail as there’s more of us, with more gear, so VV open the show), it’s an excellent night. Punk deity Helen of Troy has been spotted, and rumour has it that Paul Morley from the NME is reviewing the gig. Much later on, we arrive at Toddington services on the M1 for the ritual beans on toast, mug of coffee and Space Invaders; all under the curious gaze of HGV truckers. It’s a placid August night, and back outside, on the steps among the concrete flower beds strewn with fag butts, the Vice Versa lads put on a little show.

Martin out front, Mark and Stephen side by side, shadowing him, they break into the chorus of ‘Tracks Of My Tears’, complete with soft-shoe shimmy dips and elegant, swaying arms.

“What do you think lads?”

“Yeah right, come on you lot, get back in the van.”

ABC's debut album 'The Lexicon Of Love' was released in June 1982 and entered the UK album chart at number one.

Mark White and Stephen Singleton are making music together again as Vice Versa.

A box set of their archive recordings is available to buy at: http://www.vinyl-on-demand.com/-1-18-507.htm