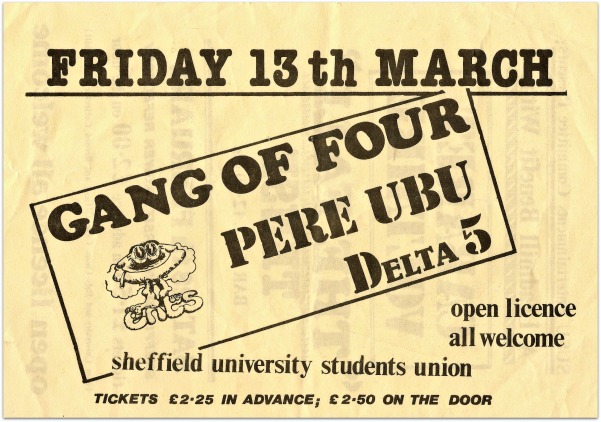 A mid-morning coffee-break at the National Coal Board’s offices on Queen Street, Sheffield. On the second-floor landing, a small queue is forming at the vending machine, proffering ten pence pieces in exchange for something hot, wet and caffeinated in a plastic cup.

“You’re in that band aren’t you? Clock-summat?”

“Ooooh, Russian. Are you communists?”

Vanessa gingerly extracts her beverage from the silver jaws of the dispenser and trots back to her department, her curiosity satisfied.

We’ve had double-page spreads in both the NME and Sounds, but if you really want to arouse the curiosity of your co-workers, nothing works better than two paragraphs in the local rag, ‘The Star’.

I recount this tale to my musician and student mates in the university’s union bar. There’s a strong turnout for what promises to be a good night. On the menu is a West Yorkshire agit-prop bap with a Midwestern avant-garde filling.

Indeed, such is the jollity amongst pals with pints that much of Delta 5’s set plays out as a grumbling, bass-heavy background throb. When I do break off for a look I find a nervous looking quintet huddled close together in front of the back-line gear for two other bands. Three girls and two boys setting off on their first full UK tour, which will keep them on the road until Hammersmith Palais at the end of the month. Fellow students and near-neighbours, from a dozen junctions up the M1, their frangible CND disco tunes find a sympathetic audience; they remind me of a more bookish version of my recent discovery the Bush Tetras.

All I know by Pere Ubu is their overwhelming, Hindenburg-roar of a single ‘Final Solution’. I bought the Rough Trade 45 last year, blithely unaware it was a reissue of a song originally from 1976. It sounds vital and thrilling, threatening to self-destruct as soon as the needle hits the groove. Band mates speak highly of their albums ‘The Modern Dance’ and ‘Dub Housing’, but apart from the odd track on John Peel, these are records that I’ve heard about rather than actually heard. As it turns out, this doesn’t really matter, the jaw-flooring Pere Ubu are a great live band. 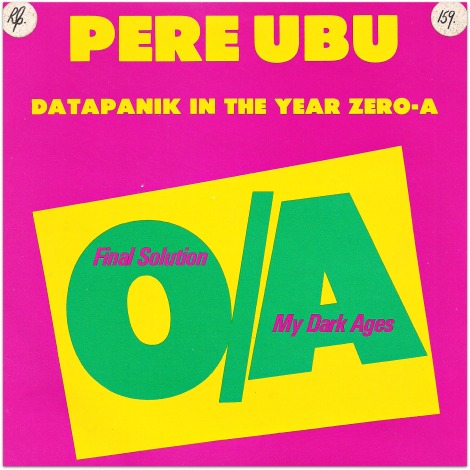 Another five-piece, dapper in dark suits, white shirts; they could be IBM guys cutting loose after work. The keyboardist has a beard of thick black algae, concentrating on a small synthesizer with a medusa-like tangle of wiring, as he coaxes extra-terrestrial sounds from this telephone-exchange. Their larger-than-life singer, David Thomas, is a one-man circus: ringmaster, clown, dancer and magician rolled into one. But his portly frame belies a nimble gracefulness; he glides across the stage as if he is levitating, frictionless, just above the boards. A Michelin man in a wrinkled black suit, bobbing lightly, an unlikely mix of delicate and imposing, just like his chosen nom de plume – Crocus Behemoth. 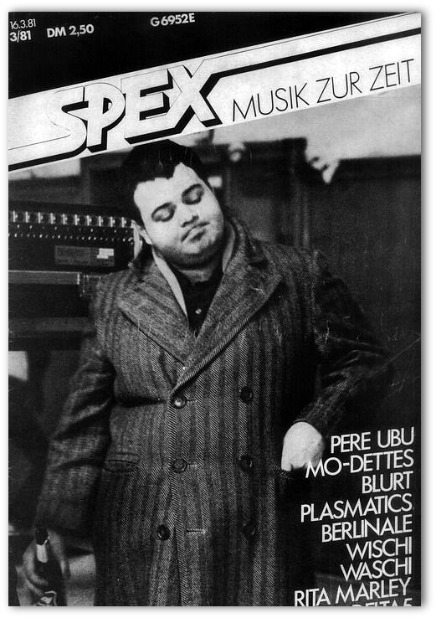 His voice is other-wordly. Keening, shrill, a wobbly vibrato, think Roger Chapman from Family sucking on a helium balloon. Then gibberish, speaking-in-tongues, Klunk from ‘Dastardly & Muttley’ made flesh. Jabbering atop a science fiction soup of space-shanties, carny barking and art-rock clatter. More deranged than their Ohio neighbours and fellow experimentalists DEVO; there must be something in the waters of Lake Erie. This is Pere Ubu’s first time in Sheffield, the home of weird. We worship at the Church of Beefheart, our tutor is Professor Eno, and we receive this singular, unforgettable band the only way we know how: Welcome cousins, what took you so long? Pere Ubu soak up our applause and cheers, positive energy to fuel the flying saucer they must have parked on the roof.

Just back from a warm-up gig in Belfast, Gang Of Four are embarking on their biggest UK tour to date, promoting their out-this-week second album, ‘Solid Gold’. Having impressed fans and critics with their debut album ‘Entertainment!’ – a riveting coupling of riffs and Realpolitik – their follow-up is designed to be this Gang Of Four’s very own Great Leap Forward. They’ve signed to EMI, but are intent on subverting the system from within. I’ve bought into their revolutionary argot to the extent that buying ‘At Home He’s A Tourist’ in WH Smith’s on Fargate feels like an act of sedition. 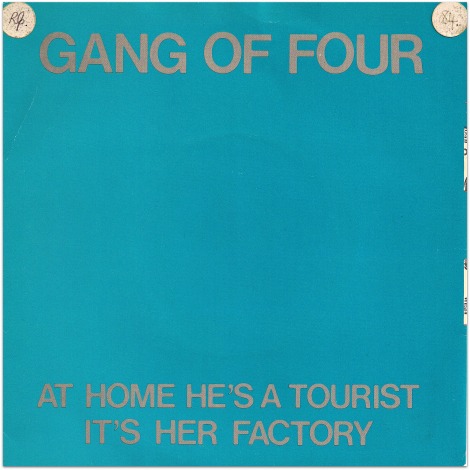 Creeping Funk is a disease, spreading at epidemic speed in 1981. All of a sudden, every post-punk band wants to be Sly and Robbie, or Bootsy Collins and George Clinton. Leading the UK infatuation with all things punk-to-funk are The Pop Group and A Certain Ratio. In DVA, we’re at it as well; our next single is going to be a funky thumper called ‘Don’t Listen To Mother’. Determined not to be left behind in this race to the dancefloor, Gang Of Four have hired top American R’n’B producer Jimmy Douglass to help them put the Chic in apparatchik.

Pere Ubu, coming off a string of European dates, are running like an elaborate Rube Goldberg machine. Gang Of Four played their first gig of the year just two days ago. They are still getting to grips with their new songs, which they play a lot of, and which we the audience don’t yet know. Things keep breaking; roadies change the snare drum three times in the course of the set. 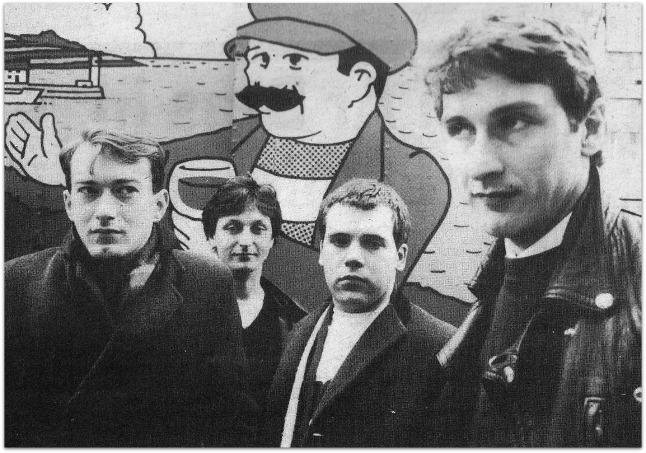 Drummer Hugo Burnham wouldn’t look out of place on the cover of a well-thumbed Richard Allen ‘Skinhead’ paperback. To his left stands a strikingly heroic Andy Gill, gold-sprayed Fender Kalashnikov in his hands, looking like a Viktor Ivanov Soviet propaganda poster. Together with bass player Dave Allen, they perform pincer movements around Jon King; the singer suited in muted grey two-piece, a lanky clothes-horse with aquiline features and tousled hair. A smart-looking band, the pleats in their pegs as sharp as their polemics. I wonder, briefly, if they have a flight case full of Corby trouser presses. 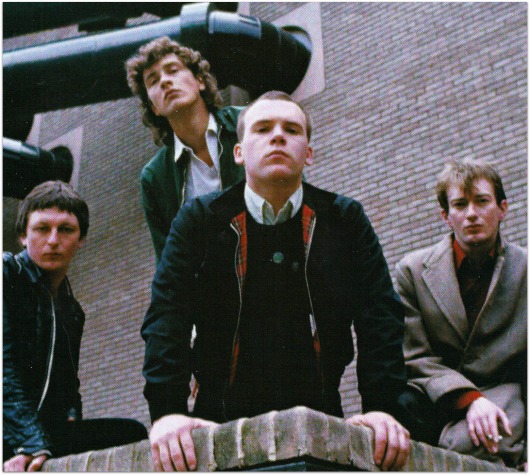 With the first two-thirds of their set dominated by new material, mostly funky variations on War’s ‘Me And Baby Brother’, Gang Of Four finally hit a run of familiar songs: a Molotov cocktail of ‘Return The Gift’ and ‘Naturals Not In It’, from ‘Entertainment!’, mixed with the pummeling Geronimo’s war-dance that is the Peel-approved new single ‘What We All Want’. This is indeed what we all want. Gill’s fearsome flame-thrower guitar scorches us as he makes purposeful, Wilko Johnson-esque, runs up and down the stage, while Jon King dances like a dervish, his elastic movements apparently dictated by some unseen, drunken puppeteer. This kinetic choreography, combined with their indisputable maul of sound, finally conspires to send us - the cheering, belching, boozy mob - over the edge into a sweaty ecstasy. 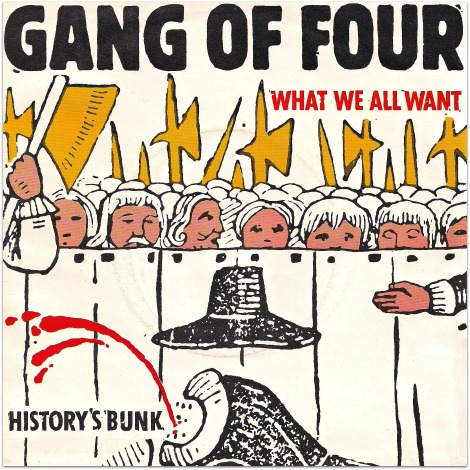 I head home for a weekend of hangover management. Gang Of Four head for Manchester, with London and America on the horizon, and a not-to-distant appointment with the prefixes ‘seminal’ and ‘legendary’.

With thanks to Jon Downing. Additional memory-prodding from Russell Fearn and Ron Wright.

More pictures over at https://mylifeinthemoshofghosts.tumblr.com/