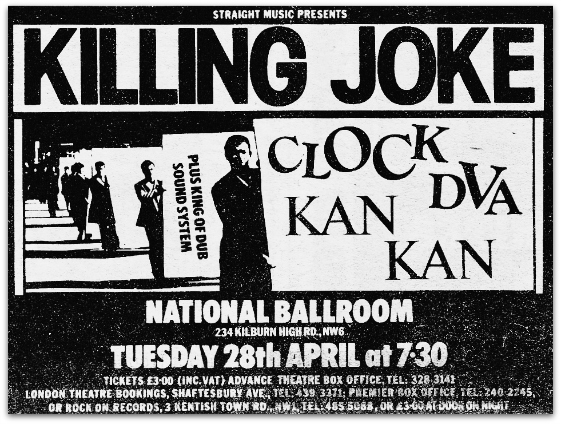 “Killing Joke? It’ll be like United away at Millwall, Adrian Street versus Giant Haystacks, Jesus at Golgotha, we’ll get crucified!”

Following DVA’s decent away performance at Bauhaus’ coven in the caverns under Charing Cross station in March, Fetish Records boss Rod has been hustling to get us on the Killing Joke tour. I think it’s a terrible idea. There’s us, with our blue tones and impressions of African winters; and there’s Killing Joke, a boot stamping on a fuzz pedal – forever. Even their names - Jaz, Pig Youth, Geordie, Big Paul – suggest a spirit of ’76 punk-rock gang, The Bash Street Kids redrawn by Friedrich Nietzsche. Rod tells me that David Byrne loves our album, so if that’s the case, why can’t we go on tour with Talking Heads? Someone a bit more… cerebral?

Q: “What would you call success for Killing Joke?”

Youth: “Tons of groupies. A pound of grass a week. Millions and millions of pound notes.”

The tour is on (boo!), the tour is off (hurray!!). The tour is on, but we’re only doing two of the shows (hmmm…). Then the coldest spell of weather since 1908 hits the UK and everything – gigs, work, public transport, schools, sport – is off. Thank you, Jack Frost, for this nation-wide headline white-out. And what seems like a final reprieve.

However, as self-appointed harbingers of the imminent global Armageddon, storm troopers Killing Joke aren’t about to let a bit of weather interrupt their plans for UK domination. 8.45 on Tuesday morning and there is our sax-man Charlie at the front door (Mum and Dad don’t have a telephone) with news that tonight’s gig in London with Killing Joke is on. 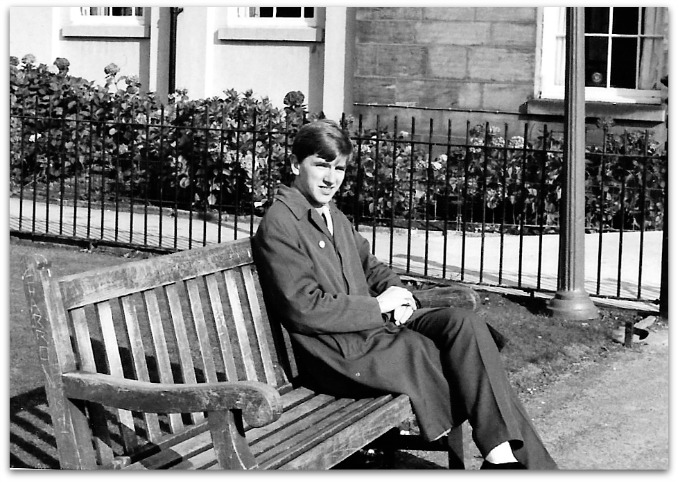 After much umming and ahing in The Beehive, while a van driver is found, we eventually head south across the Trent Valley tundra, en route to London. Formerly the Grange Cinema, The Kilburn National Ballroom, owned by three brothers from Tipperary, is usually a craic and ceilidh house for showbands entertaining the local Irish community. For this traditional Celtic venue, therefore, tonight is a tentative foray into the world of alternative rock. Load-in complete, I wander over to the Better Badges stall and buy a Beat ‘Psychedelic Rockers’ button.

“Adam Ant, Adam and the Ants, Antmusic, Whip My Valise.”

Killing Joke’s fans are largely young lads with short crops or spikey tops, clad in leather jackets. I haven’t seen a tribal gathering like this since the Futurama festival in Leeds last September. Punk’s Not Dead, apparently, so it looks like The Exploited are onto something. We get heckled, one oik takes great delight in throwing lit matches, little flaming arrows of indignation, at us for the duration of our set. We shuffle off, in search of our £85 fee; Kilburn National barely summons up a shrug of indifference.

“I just take these irrational outbursts sometimes. I’ve hit everyone in the band at one time or another, except Geordie. There doesn’t seem to be any point in hitting him.” - Big Paul Ferguson, NME, 9th May 1981.

Rule proving exceptions notwithstanding, everyone – both band and crew – seems to be united in their fear of the drummer, Big Paul. If our band runs on a policy of détente, Killing Joke appear to operate on the doctrine of Mutually Assured Destruction. They all seem to loathe each other but appear to thrive on the tension this creates.

Killing Joke launch into ‘Wardance’, which is basically Sham 69 after reading Sven Hassel. Singer Jaz has saddled himself with a synth the size of a sideboard. To compensate for being rooted to the spot, he’s devised a strident marching dance. In his head this might represent Iron Curtain forces pouring into Schlesweg-Holstein; in reality, it resembles an Alsace vintner stomping down a resilient vat of Riesling grapes. From time to time, when Jaz strides, eyes ablaze, to stage centre and berates his Vandal hordes, he’s an unlikely hybrid of Fagin and The Crazy World of Arthur Brown. 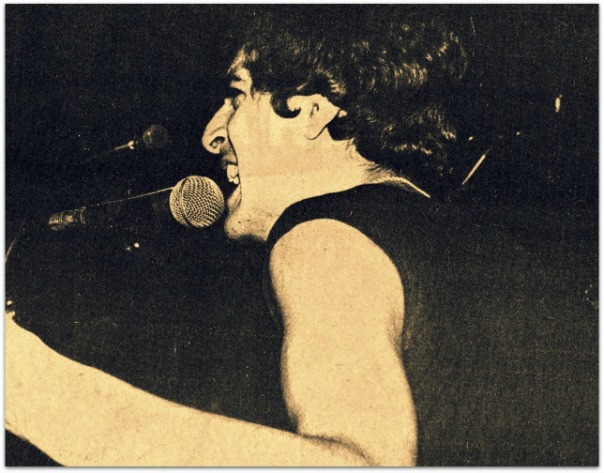 Sideburns shaped like daggers, Big Paul triggers the disco hand claps for ‘Follow The Leaders’. Cue furious Kodo pounding and thick-as-thugs riffing from guitarist Geordie, a pointillist Robert Plant with a mop of blonde hair, and sludgy bass from Sid Vicious clone Youth. Killing Joke are volume junkies, as subtle as a dawn raid by the SPG. “Change” is their own clipped, terse variant on the “Me and Baby Brother” riff, which every alternative rock band doing punk-funk is borrowing, us included.

After a while, this relentless death by decibels starts to get very samey. Like the ten plagues of Egypt except that God just keeps sending locusts, and I’m thinking: “Come on lads, weird it up a bit, send us some frogs, or darkness for three days; go moody, take it down a gear.”

Someone must be listening because the menacing synth throb of ‘Requiem’ oozes out into the hall, and the band fall into its sombre, ponderous beat. Geordie smears another paint-stripper lick, and the walls of the old picture house shake. Down on the dance floor, five-hundred spikey seal cubs gaze up in awestruck wonderment as the bloody club comes down and down again. 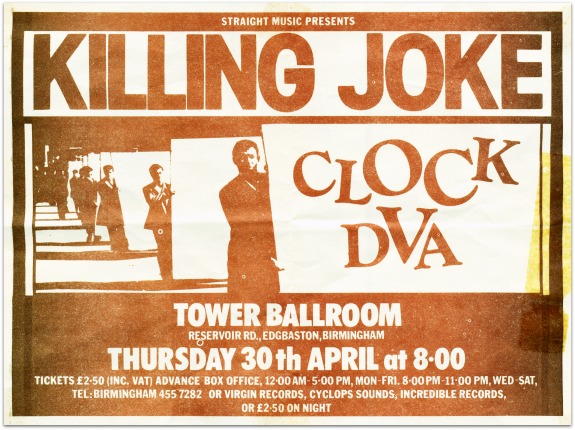 Q: “Why did you choose Clock DVA as a support band on this tour?”

Jaz: “We didn’t really, I’ve never heard them, we don’t choose our own support bands because we can’t think of anyone we like enough to offer that particular spot to.”

Paul: “Yeah that’s the problem, but if there are any good bands out there we’ll always be ready to listen.”

Q: But Clock DVA, well I wouldn’t have thought they were your taste in music, not really for your audience you know.”

Interview with The Future Past fanzine, Birmingham 30th April 1981. 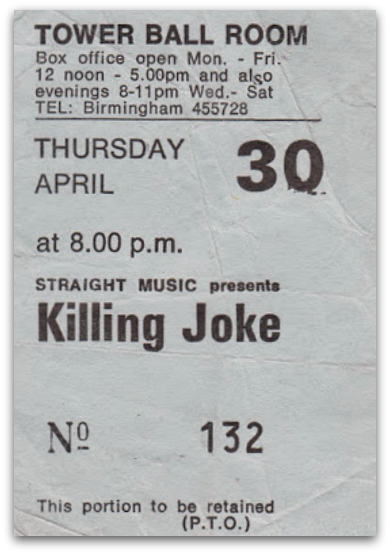 Two days later and the snow is gone. The Tower Ballroom is a large ex-Mecca night club with fake palm trees, a revolving stage and panoramic windows overlooking Edgbaston reservoir. Killing Joke are travelling down from Liverpool, no doubt scanning the horizon for incoming ICBM’s and mushroom clouds. In our van, I’m more curious to see if we might bump into Warwickshire and England pace-man Bob Willis.

“I’m the most difficult one of the lot to get on with because I’m so unconventionally cuntish.” – Youth, Jamming! Interview, April 1981.

Backstage, Youth is sprawled on a sofa. Having survived an extreme acid trip last year – one which resulted in him burning money on the streets of Kensington & Chelsea, and then being hospitalized and enduring ECT treatment – he’s something of a sorry figure, a slender, almost spectral presence. He’s been wearing the same white suit all year – eating, sleeping, gigging, travelling in it. He looks like The Man From Del Monte, after being been dragged backwards through every orange grove from Miami to Monterey. He smells, of fast food, farts, and no fucks given. And dope, a little cannabis cloud hovers above. It’s hard to tell where the suit ends and Youth begins. 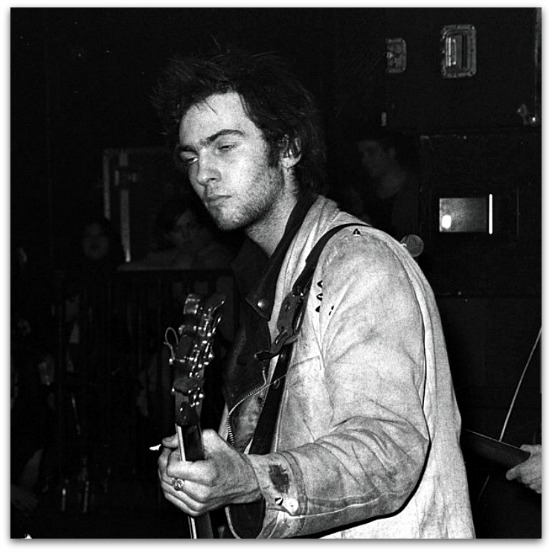 Nevertheless, he lets Judd use his bass amp and cabinet, which is the size of a wardrobe. We duly twitch and scratch for forty minutes in front of a couple of hundred impassive Brummies. When the lions can’t be arsed to maul the Christians, something’s up.

But wait, we meet a fan:

“That song, White Cell, is it about nick life?”

“Nick life. Prison! My boyfriend’s inside now, and he loves that song. Have you done time?”

Killing Joke ignite ‘Wardance’ once again, to be greeted with that traditional Birmingham welcome – spitting. What year is it here? Impervious to the showers of gob, Killing Joke pour down toxins from their brutalist, asbestos-lined, lead-painted tower block of noise, contaminating Birmingham into baneful submission.

It's the last night of the tour. Killing Joke head back to their communal crash pad in Notting Hill to wound their licks. We end up lost, both literally and figuratively, in Burton-On-Trent at 3am.

Following the release of their second album - 'What's THIS For?' - Killing Joke went back on tour around the UK, which brought them to Sheffield Polytechnic in July. After the gig they were interviewed by local fanzine NMX.

NMX: “What do you think about Sheffield?”

Jaz: Well, I admire the spirit. I sympathize. A lot of it sounds like Pink Floyd. Well you know what I mean – it’s all sort of in your head, like Joy Division – you sort of stand there and watch it all and listen to it. It sort of don’t motivate you to do anything. Clock DVA supported us once, Birmingham.

Pinky (a hanger on): “Horrible band!”

Jaz: “Clock DVA, Clock DVA, Cabaret Voltaire and more Clock DVA. What do you like it in Sheffield for anyway? It’s so depressing.”

Youth: “I think it’s a fucking hole. A hole of holes. Can I have your ear-ring?”