“So why are you singing it in French?”

“What are you saying in French then?”

This exchange of almost Troggs tape quality takes place in Vinner’s bedroom, at the top of his parent’s rambling house, which doubles as our band rehearsal space. It’s a sunny afternoon, the window is wide open, and the good burghers of Burngreave are been serenaded by four Sheffield youths taking linguistic liberties with Mink De Ville’s Latino new wave shuffle.

Timbo has quit, pursuing his love of the Bee Gees and Eric Clapton, and with his departure we’ve ditched the unloved “The Sounds” moniker. We’re “Aftermath” now, named after the Rolling Stones album. We’ve been joined by the Farrell sisters – Veronica and Marie – so we’ve got the coloured girls to go “do-de-do-de-do”, just like Lou Reed. We’re going for that Humble Pie and Blackberries vibe, but to be frank it’s coming out more Yorkshire pudding and suet dumplings. 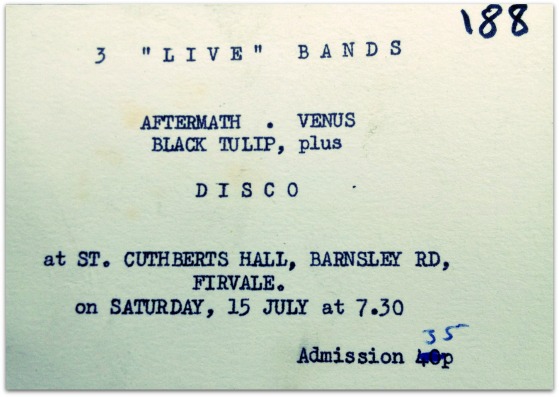 Along with ‘Spanish Stroll’, we’ve thrashed out a passable stab at “It’s Only Rock ‘n’ Roll” and a limp pass at Dylan’s “Lay Lady Lay”, the lady in question being more brassed off than brass bedded, refusing to be stirred. Band practice ends with a robust romp through Bowie’s arrangement of “Sorrow”, we’re striving to project a decadent air of Chanel No. 5, de Villeneuve sophistication, but it’s hard in a small, sticky bedroom reeking of Brut and talcum powder. Ten minutes later, Aftermath: Vinner, Wilma, Lango and me, are on the bus into town on our way to The Limit. 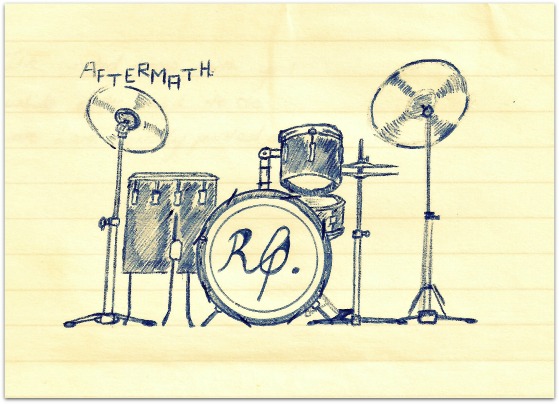 Sheffield’s newest venue has started free gigs on Monday and Tuesday nights. It’s a cheap evening’s entertainment; the rest of the band came in last night for The Ultimate, our power-pop faves Harlow (featuring future Marillion frontman Steve Hogarth), and The Thompson Twins (five years and myriad line-up changes away from global domination). We’ve come in tonight to see Cabaret Voltaire, whose singular reputation is spreading quickly on the local grapevine, and fast-rising, neighbourhood rock-poppers The Push. It’s only my second time in the venue, but the motley gathering of students, musicians, misfits and the after-work curious already seems comfortingly familiar. We’ve been joined by a bristling of skinheads, glowering at the front of the stage. 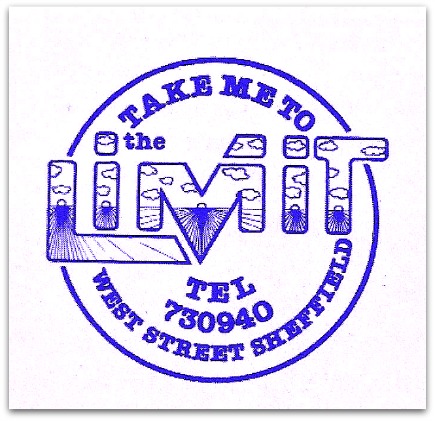 Cabaret Voltaire are on first. It’s early, before 7pm. There are three of them, a bit older than the four of us, about three score years and ten between them. Stephen Mallinder – long hair, long coat, bass guitar, cheekbones by Georges Braque. Pale and handsome: Jackson Browne if he had stayed in NYC with Nico rather than splitting for the LA sunshine. Richard Kirk – part cherub, part yobbo, sartorially inclined, generously coiffured, guitar. Chris Watson – serious, sedulous; engrossed in the keyboards, circuitry and tape machines that surround him.

They start. It’s hard to process. Three days ago, Vinner and I were worshipping at The Church of Chuck Berry in thrall to Frank White’s rock ‘n’ roll revivalism. It would be easy to say that Cabaret Voltaire are from a different planet, but the images that these preternatural sounds conjure up are closer to home. They have an alien yet familiar quality. Scree raining down in a desolate quarry at twilight; the serpentine hiss of molten iron in a claustrophobic steel mill, snow on a TV screen in an empty room. 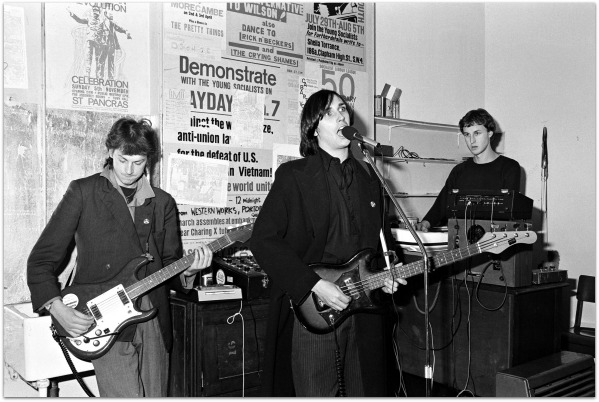 Behind them, corrugated layers of seemingly random imagery unspool at thirty frames per second. We watch and absorb, a dark corrosive matter drip-drip-dripping from a rusty tap. If you listen very closely, you can pick out the arrhythmic scratching of heads just above the prickly gauze of noise. 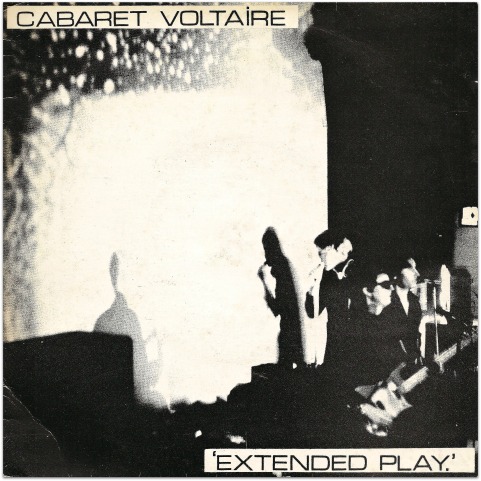 I’m whirring through the Rolodex in my head, trying to work out what I’m listening to. I think I have a grasp of strange music: side two of “Low” by David Bowie, Roxy’s “The Bogus Man”, “Zeit” by Tangerine Dream, “Pierrot Lunaire” by Schoenberg, taped off Radio 3 one afternoon. The guitar suggests angry hornets attacking the Hilversum radio mast with a chainsaw, diseased sounds blip from speaker to speaker like tsetse flies. There is a rhythmic anchor, the drum machine from Timmy Thomas’ “Why Can’t We Live Together”, dissolving in a petri dish of battery acid.

Just when we think things can’t get any stranger, the band leave the stage and step into the crowd. Richard Kirk brushes past; he returns shortly after , pint in hand, and stands next to me. We – band and audience – watch as the film judders on, we’re frogs in a simmering saucepan.

I know a little about the surrealists from my trips to Graves Art Gallery on Surrey Street, and a bit about the futurists through my love of Be Bop Deluxe. Beyond that, “Dada” could have been my first word, the situationists could be studying ‘George & Mildred’. I am culturally adrift. Is this “a happening”? Is this Art? 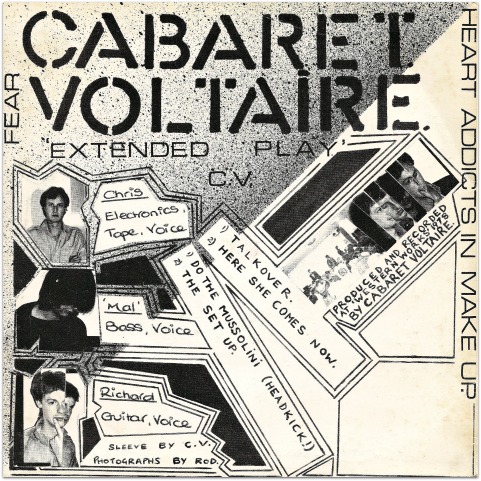 It ends. There is a smattering of confused applause. The spell is broken: “Are tha’ tekkin t’piss or what?” The skins look confused, if a heckle falls on an empty stage, does it leave a mark?

Deaf Aids are on next. Their blokey, amiable rhythm ‘n’ blues, with its still sticky coat of new wave varnish, throws a life-line to those of us still adrift in the post-Cabaret Voltaire flux. Heads nod, feet tap, the skins cheer up a bit.

“This one’s called ‘Children Of The Third Reich’”.

The lyrics flirt with fascism. The music is taut, dense and sexless. He’s watchable in a detestable kind of way. The skins push each other around, there is argy, but thankfully no bargy. The rest of us look on, mute. We are either young, liberal minded types who think everyone is entitled to their own point of view, or we are collectively shit scared of getting a 14 eye oxblood Dr. Martens boot to the head. Molodoy continue to thrash and thrum, we the audience opt to keep schtum.

There’s a palpable sense of relief then they depart with their bovver-boy cronies. The Push hit the stage and instantly lift the mood with their infectious, feel-good, rock ‘n’ pop. They headlined The Limit last week, and here they are again; it’s handy when the venue owners also manage the band. They are one of the first Sheffield bands to release a single – “The Cambridge Stomp” – and there is a sense that they have enough momentum locally to go on to bigger things. Me and the lads are fans, the single has been a staple at parties all summer, and we’ve even had a go at working it out in rehearsals. The singer is called Charlie Paris (no doubt one of the Parisians from Manor Top) and he has enough ersatz Jagger jigs to keep the crowd entertained. The rest of the band are tight, well-drilled, slick even. They are warming up for their biggest gig so far, Sheffield University next weekend, live on Radio Hallam, and we’ve already decided to go along. 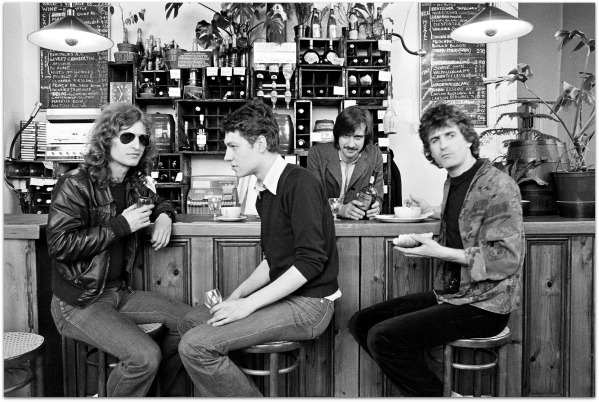 It’s been a strange evening of musical spheres colliding. Challenging and confusing in places, safe and reassuring in others, interspersed with threatening tremors of hate and threat. It’s Cabaret Voltaire’s oblique pulse and fizz that lingers longest for me. I’ve had peep into an unlocked laboratory of strange new sounds and sights, and I know that I’m going to have to go back for another look.

Thanks to Pete Hill Photography for the Cabaret Voltaire and Push pictures.