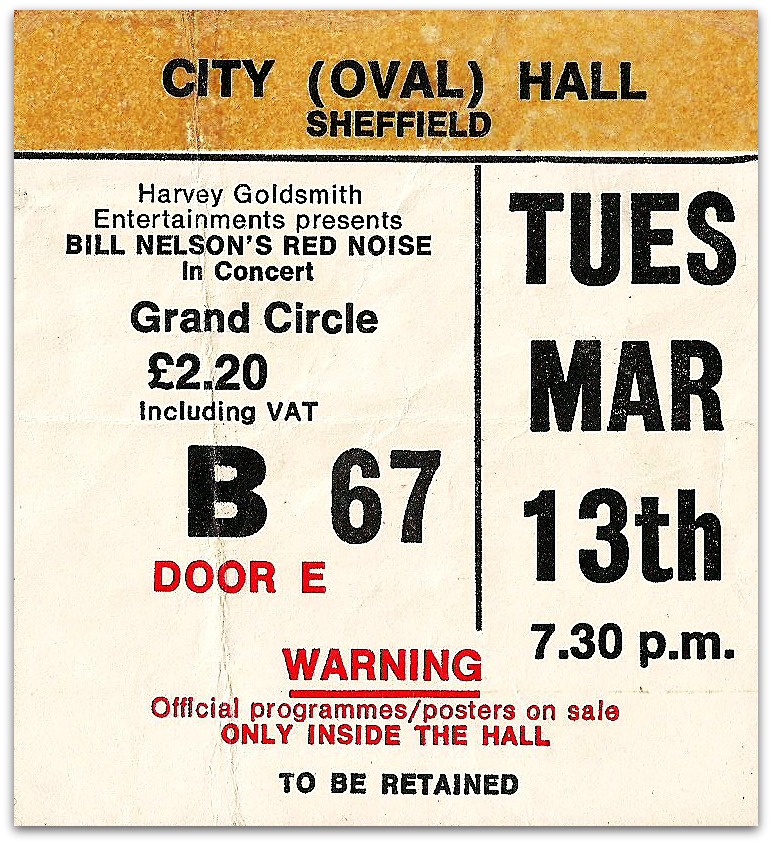 One year and one month to the day since our first encounter, my teenage music hero Bill Nelson returns to Sheffield City Hall with a new band, a new look and a new sound. Since February ’78 Bill has dissolved his last band, Be Bop Deluxe, and, paying close heed to David Bowie’s maxim that “tomorrow belongs to those who hear it coming”, has thrown himself into the new wave with the energy and ambition of a Bondi Beach surfer. His new band is called Bill Nelson’s Red Noise.

I’ve been similarly busy. Our school band has sailed under three flags of convenience – clueless clubland hopefuls The Sounds, classic rock Stones clones Aftermath and power pop epigones Exit – before being shipwrecked on the looming promontory that marks the jagged coast of Real Life.

My devotion to Bill remains undimmed. At the top of my Christmas list in 1978 was the original band’s swan song, The Best Of and The Rest of Be Bop Deluxe, a hastily compiled best of, padded out with previously unreleased tracks. This unswerving loyalty is born of a complex combination of parochial pride, musical elitism and unflinching support for the underdog. Bill Nelson is part of my select coterie of local heroes, with whom I feel a strong affinity, anchored by the relative geographical proximity of our places of birth: Sheffield United’s grey fox-in-the-box Alan Woodward, metronomic Yorkshire and England run-maker Geoffrey Boycott, Monty Python’s Michael Palin and my big brother John. I like Be Bop Deluxe because no-one else at school is interested in them, happy to play Saint Jude in the hope I might be vindicated in the long run.

So when I read about Bill Nelson’s new band in the NME, I decide I’m going to like them before I’ve heard a note of music. It is therefore something of a relief to hear, on John Peel, the first single, ‘Furniture Music’: Sound And Vision-ary themes of domestic solitude and isolation are explored, over a crunching riff of Kinksian dimensions. Phew, I can start bleating on about it in the common room. 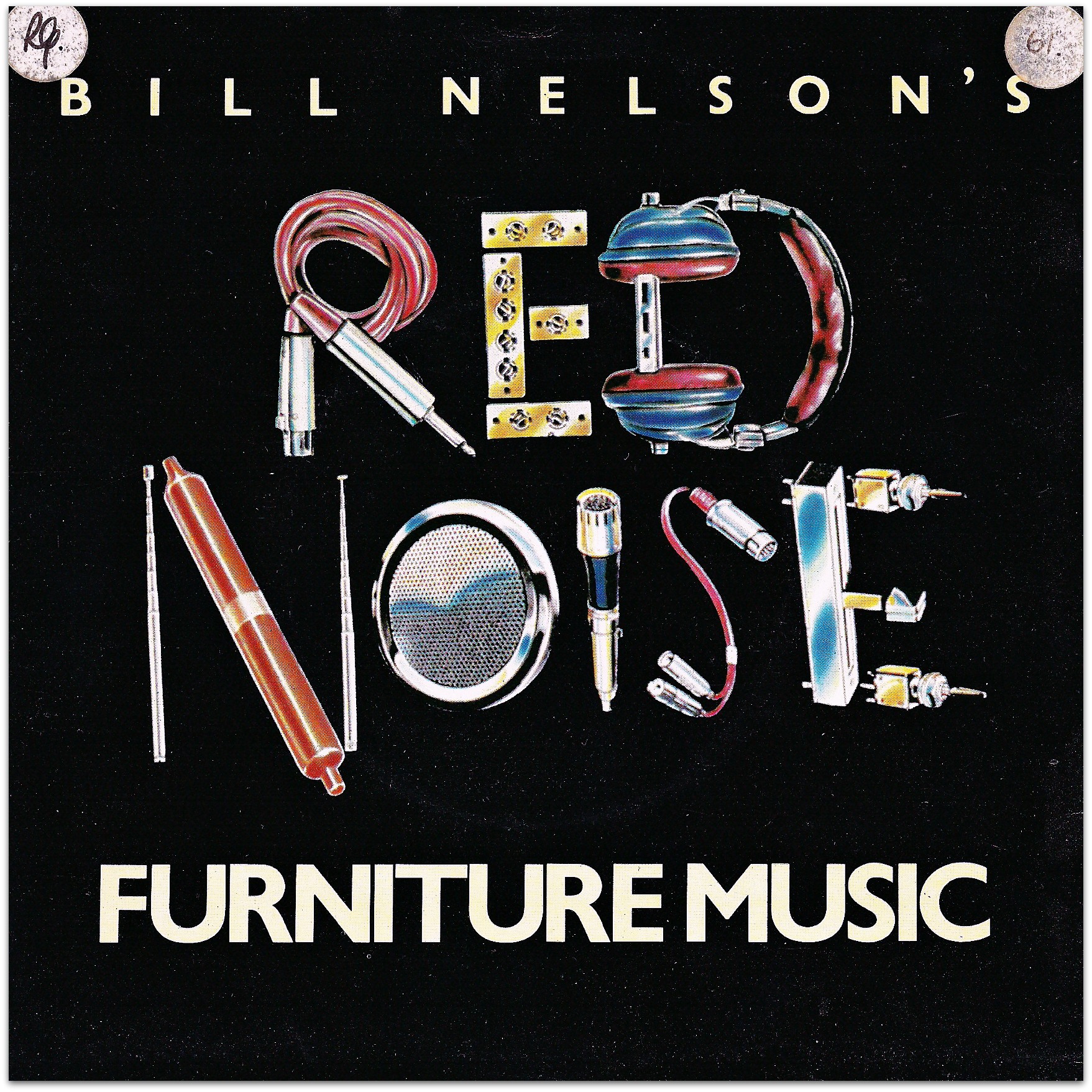 I’ve blathered my school mates / sometime band mates Vinner, Timbo and Lango into coming along. Vaulting the Berlin Wall of A-level revision aids, which are supposed to mark our home boundaries for the coming weeks, they have slipped passed the parental sniffer dogs and made their break for freedom.

It’s a glowing testimony to the enduring popularity of Bill Nelson with my fellow South Yorkshiremen that the cavernous City Hall looks close to full tonight, 2,000 like-minded souls. Bill and I might be excited by the new sounds and possibilities created in the wake of the punk explosion, but the audience remains resolutely denim clad, Rush and Lizzy patched, and long-haired. The only drainpipes to be found are in the venue’s over-worked bogs.

First on tonight are Fingerprintz, young Caledonians who sound like Hank B. Marvin jamming with The Magic Band - quirky without being irksome. These slippery Scots take delight in acute angles and opaque imagery, and their tense, fidgety music - Tom Verlaine’s Television tossed from an Easterhouse high-rise – impresses us on first hearing. 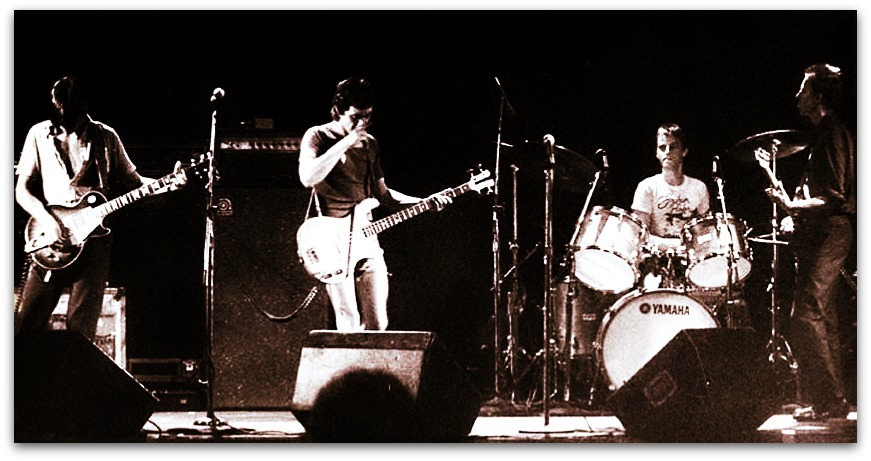 The house lights dim once more, as a Cabaret Voltaire-sque intro-tape blips and wriggles out of the PA. Then Red Noise wallop into ‘Don’t Touch Me, I’m Electric’, the opening track on their new ‘Sound-On-Sound’ album. Goodbye Be Bop. Goodbye airships, seagulls and Yorkshire landscapes. Red Noise is the sound of Bill Nelson ruthlessly compacting his old band in a sonic car crusher. Those handsome retro fins and gleaming grilles instantly atomised, as rigid blocks of new wave noise roll relentlessly off the production line.

On stage, only keyboard player Andy Clark, barely recognisable with a Chaucerian pudding-bowl crop, has survived the Great BBD Cull of 1978. Nelson’s younger brother Ian has joined on saxophone, giving the songs an X-Ray Spex plays ‘Rockin’ Goose’ feel. The rhythm section are newcomers Rick Ford on bass and American Steve Peer on drums. I can’t work out who is playing the kitchen sink, but there’s a strong sense of its presence in the panoply. Visually the band are all kitted out in Maoist militia uniforms, red disc insignia and epaulettes. The look might be inspired by Peter Cushing’s Grand Moff Tarkin character in ‘Star Wars’; but, as the NME has already noted, the overall effect is to make the band resemble a delegation from the Republic of China’s Ping-Pong team. 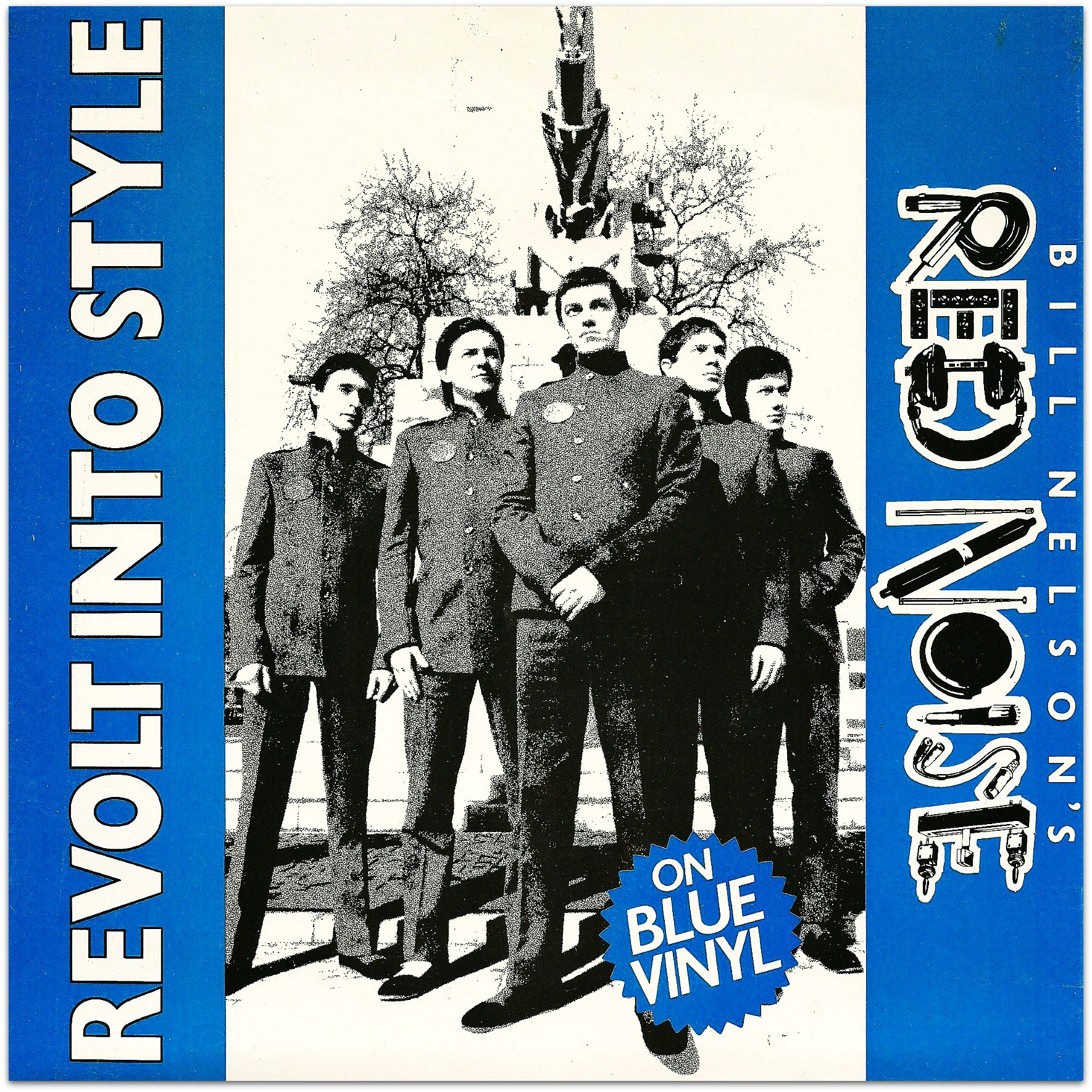 Red Noise are just over halfway through an English tour, linking up the dot-to-dot pattern of City Halls, Gaumonts, Odeons and Apollos that are the regular haunts of successful UK rock bands. For a Wakefield lad like Nelson, just 20 miles up the M1 from here, this is practically a home fixture, and he is welcomed like a returning hero. The band lunge into the broken circuit board rock of ‘Stop/Go/ Stop’, the flamboyant lead guitar that was the signature sound of Be Bop Deluxe now sacrificed for a more ergonomic approach. Shouts for ‘Blazing Apostles’ and other old favourites are ignored, but Nelson does throw us a bone in the shape of ‘Possession’ from ‘Drastic Plastic’, whose rama-lama rock ‘n’ roll brevity is a precursor to this new punk influenced sound. Air guitars are mostly kept stashed in invisible flight cases tonight. 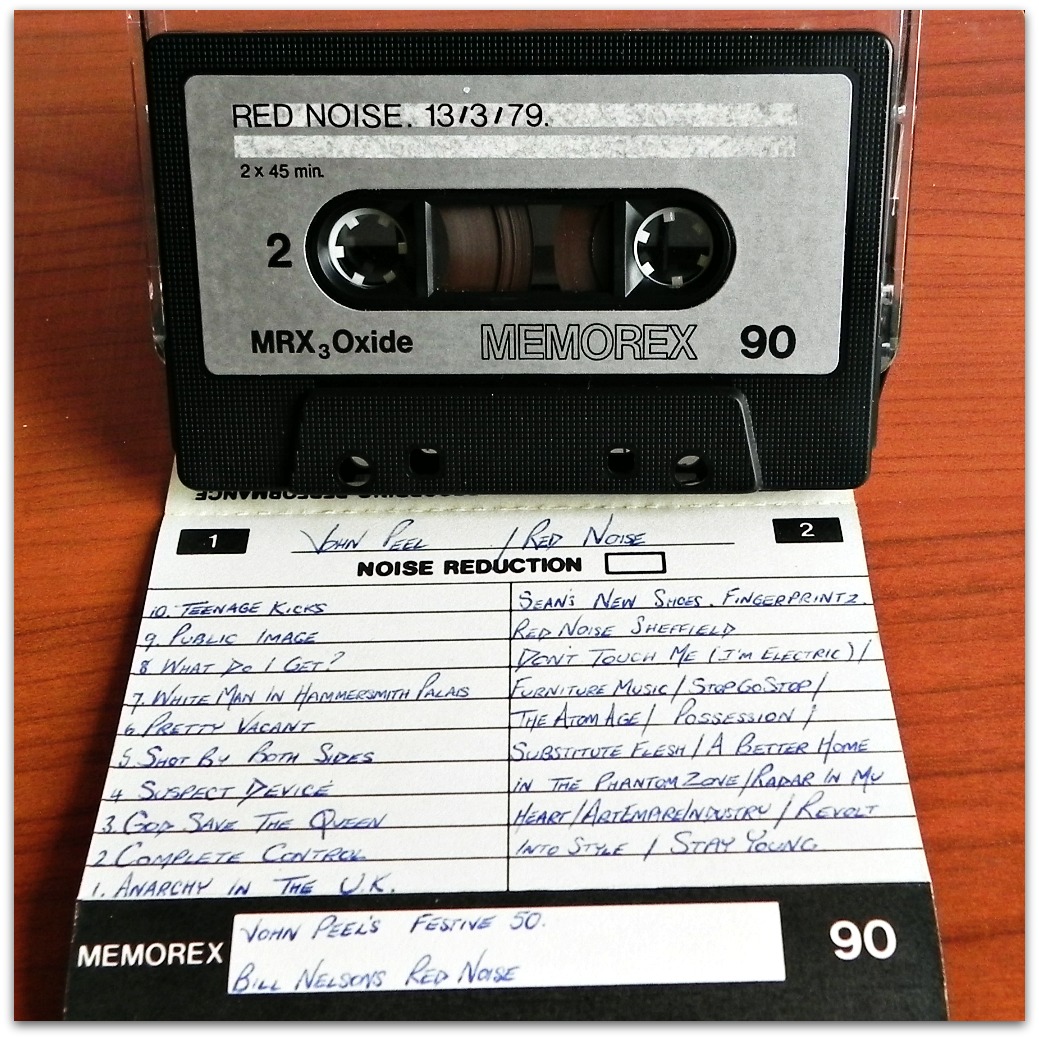 Nelson has changed his voice too, gone are the clipped, mannered English tones, replaced by a psychotic snarl somewhere between the cocksure slur of The Stranglers’ JJ Burnel and the neurotic yelp of XTC’s Andy Partridge. ‘A Better Home In The Phantom Zone’, about “accepting blandness as a way of life” according to Nelson; rides out on a riff that has recently seen active service as the chassis of ‘Mary Of The Fourth Form’ by The Boomtown Rats. The lyrics take a swing at Tom Robinson, The Beatles, The Byrds and one man band Leo Sayer. He’s crossed swords with Robinson in the pages of the NME, and McCartney and McGuinn are fashionable targets post 1977; but picking on a harmless gonk like Sayer seems too easy, like chucking spears at a bush baby. He might be trying to suppress it, but the pop / rock classicism of those 60’s greats is hard-wired into Bill Nelson’s song writing DNA, an innate gift for melody coupled with a wistful romantic outlook, that will ultimately ensure his output is more Bleep And Booster than Burroughs and Ballard.

‘Art/Empire/ Industry’ follows, frantic Constructivist sloganeering which he tries to get the crowd to chant along to, with mixed results. Then “Thank you for being such a good audience. Stay young!” It’s not clear if Bill is addressing us or himself.

“That was short” says Vinner.

“Joe Jackson is on at The Limit.”

Five minutes and £1 entry fee later, we’re in our favourite sweaty Sheffield shoebox. This is a first for me, two different gigs in one night; I’m getting the hang of this rock ‘n’ roll caper. The Limit is busy tonight. Joe Jackson, a 24-year-old graduate of The Parker-Costello School of Vitriolics; has just released his debut album, so the buzz in the basement is palpable. 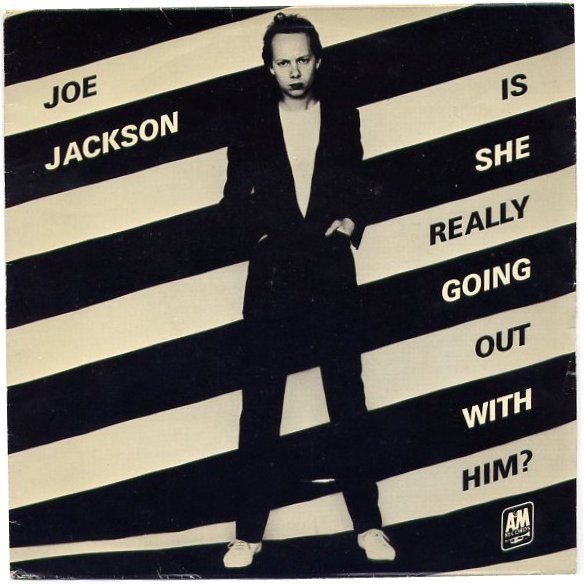 Having just been unexpectedly Ramone’d by Bill Nelson, the almost playful sense of space and syncopation on show here is a welcome change. Joe Jackson’s band is malleable, playing everything from pop to punk to lover’s rock; in stark contrast to the rigid party discipline exercised by Red Noise. Jackson himself is a gangly presence, a gawky hybrid of Plug from ‘The Bash Street Kids’ and a demobbed Private Walker from ‘Dad’s Army’, the leaning tower of geezer. Freshly minted anthem of incredulity ‘Is She Really Going Out With Him’ is joined by the bile-flecked brace of ‘Happy Loving Couples’ and ‘Fools In Love’. Bitter tales of torment from a sweat-crumpled suit of a man. 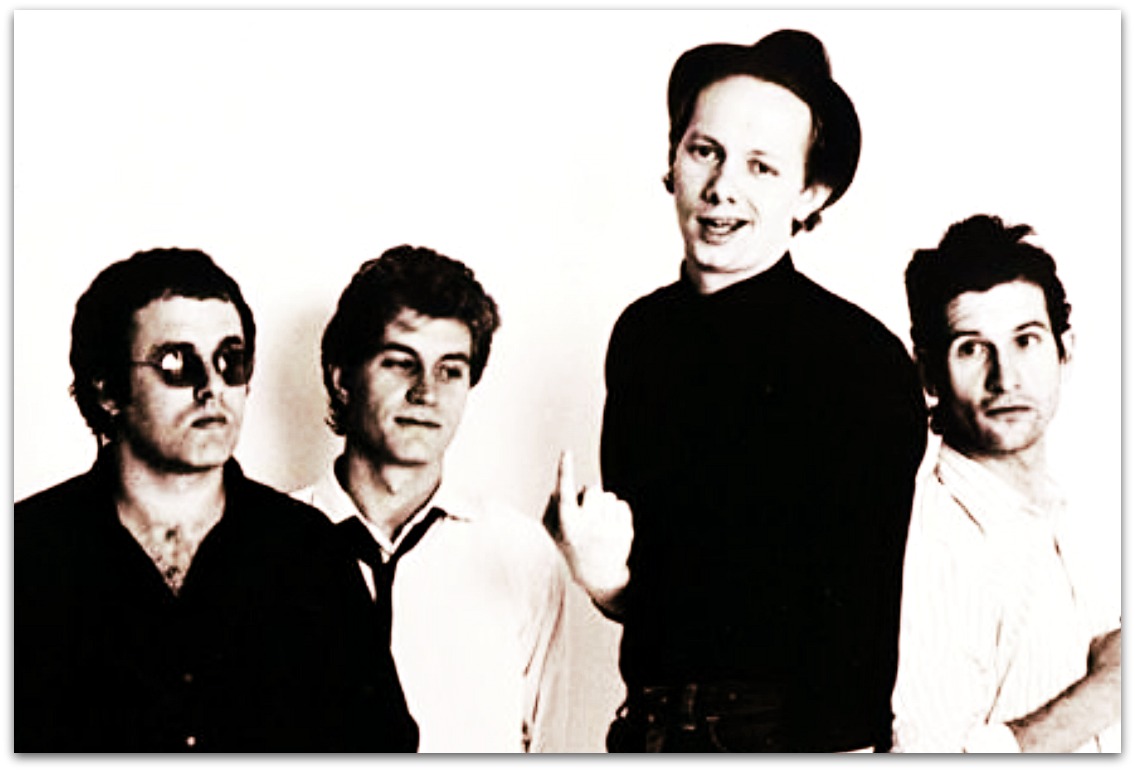 I take a glance around; Andy Clark from Red Noise is standing next to me, Andy Clark from Be Bop Deluxe! Try and be nonchalant Roger… oh sod it, I turn and proffer pen and tour programme.

Andy Clark: You’re not supposed to recognise me.

Me: It’s virtually your home ground.

AC: For Bill yes, I lived in Sheffield for eighteen months though.

As Bowie said, such is the stuff from where dreams are woven. I’m talking to, no scratch that, hanging out with, an actual bona-fide professional musician, who happens to have played on the records that have sound-tracked my last four teenage years. Come on Rog, keep talking to him.

I nod towards the stage…

What do you think of this guy?

AC: I’m afraid I rather like him, from the musician’s angle.

(Ask him if Bill is coming down!)

Er, Bill’s drumming on the album is good!

AC (endlessly patient) Yes, he’s not a great technician, but it sounds good.

On cue, Red Noise drummer Steve Peer arrives, and any patina of cool I think I am projecting is lost forever as the teenage autograph hunter resurfaces.

The mood in the basement is boisterous. Joe Jackson and his band launch into their final song, the frenetic punk thrash of ‘Got The Time’. For a big man, he’s light on his feet; and his band show a similar deft dexterity as they deliver their knock-out blow.

Bill Nelson never arrives at The Limit to hang out with his band, or me.

Back at home later, I creep upstairs to my bedroom. My school books are scattered on the nylon sheets. I’m supposed to be lost in Austen, studying hard with The Bard. The Georgian English rose on my paperback of “Emma” stares up unblinking with eyes of reproach, as if to say “What time do you call this?”

Andy Clark can be heard on David Bowie's 'Ashes To Ashes', Peter Gabriel's 'Big Time' and Tears For Fears 'Sowing The Seeds Of Love', to name just a few recordings of note.

Fingerprintz released three albums. Two of the band went on to enjoy success with The Silencers in the mid-80's.

Since his debut, Joe Jackson has released a further eighteen studio albums.

There was a boy at school named Nick Gabites had a theoretical band called PALIS (Points And Lines In Space). One day in 1979 he presented me with this re-write of 'Furniture Music' entitled 'Swimming Pool Music'. Thanks Nick, hope you are still dreaming. 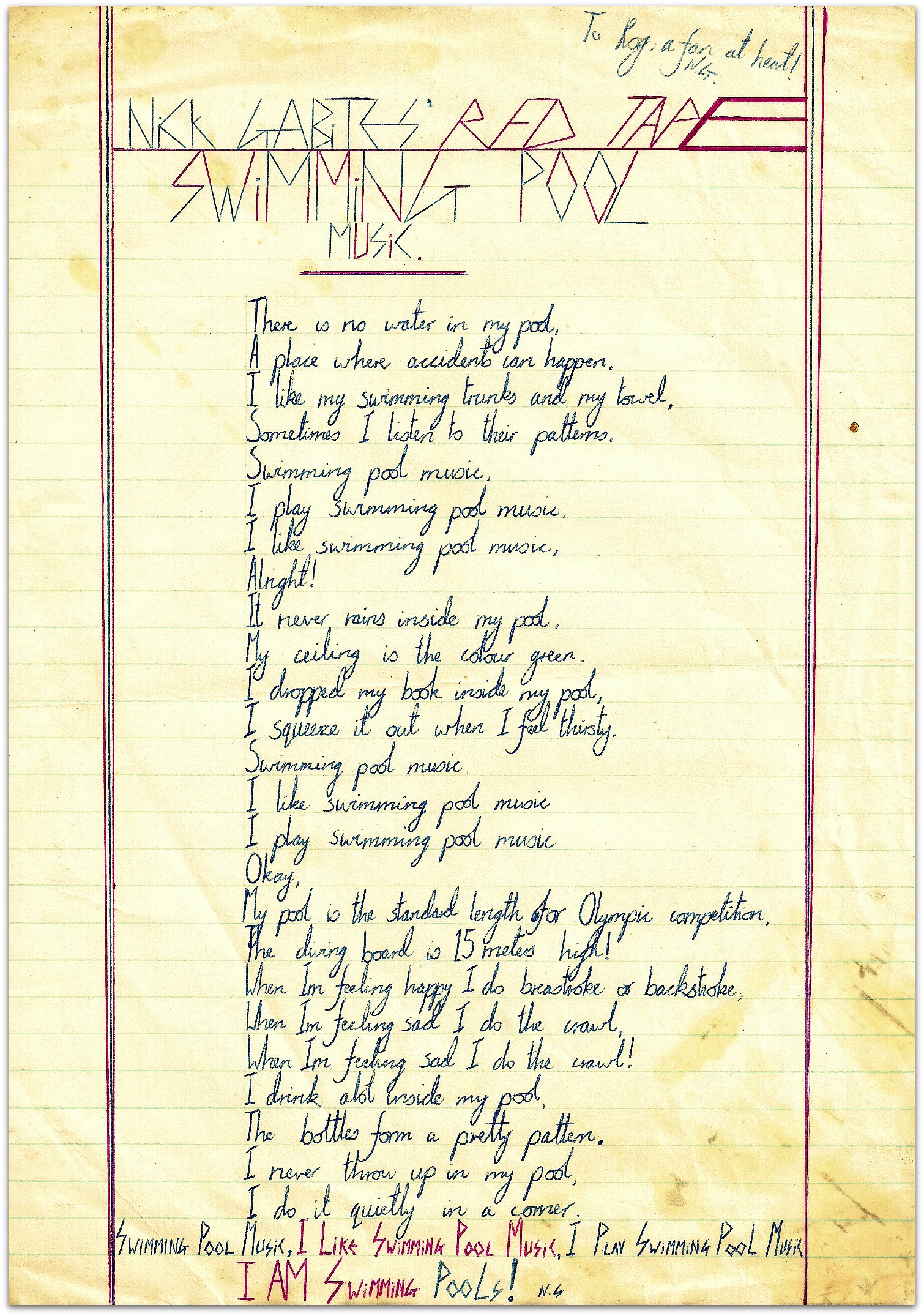