It’s a pilgrimage. A congregation of eight-hundred, mostly male devotees, packed like pilchards in this clammy West Street basement, are here to see our guitar hero Bill Nelson, Baron Be-Bop Deluxe, Mr. Red Noise. It must be an odd one for Bill. Since 1976*, the only Sheffield stage he has graced is at the imposing 2,200 seated capacity City Hall. Yet here he is, just a length of multicore cable away, at the other end of Holly Lane in Sheffield’s sweatiest little venue. So close that when DVA played downstairs in the City Hall ballroom last year, Charlie moved his gear from our rehearsal space beside The Limit in a wheelbarrow he borrowed from the council. In the words of David Byrne, Bill Nelson may be asking himself, “Well, how did I get here?”

At school, Bill Nelson was my teenage idol. Yes, I loved Bowie and Roxy Music, The Beatles and The Rolling Stones, ‘Tubular Bells’ and ‘Dark Side Of The Moon’; but so did everybody else. Be-Bop Deluxe - with their flashy, shiny songs about Yorkshire, science-fiction and dead French poets - were my band. I revelled in their perennial mid-table standing in the British rock first division, never as popular as Thin Lizzy, Queen or Supertramp. I didn’t want them to become superstars; the secret would be out, and I’d lose them to the hoi polloi.

Christmas ’76: ‘Modern Music’, Christmas ’77: ‘Live! In The Air Age’, Christmas ’78: the posthumous, will-this-do compilation ‘The Best Of And The Rest Of Be-Bop Deluxe’. That’s what I wanted (and got) from Mum and Dad at the gifting season. Fellow fan and school buddy Brent Sharp waited with me by the City Hall stage door on a freezing night in February ’78 to get Bill Nelson’s autograph. The only other autograph I had ever asked for was former Sheffield United journeyman Terry Garbett, and that was only because I didn’t know what else to say to him.

Fed up with trying to sell shorter, new-wave spiked songs to hairy Rory Gallagher fans, Be-Bop Deluxe broke up, and I stuck with Bill for the XTC-influenced Red Noise album, ‘Sound On Sound’, and another memorable night at the City Hall in 1979. At which point, long-time label Harvest/EMI lost patience with his new, awkward, angular music and dropped him. Nelson retreated to Wakefield, an axed victim of label politics, to make demos on a TEAC four-track.

While Bill was at home wounding his licks, I left school, joined a band of drug-loving weirdos, got bollocked for mentioning Nelson as an influence in a fanzine interview (not cool enough, apparently) and generally had my own musical horizons expanded. 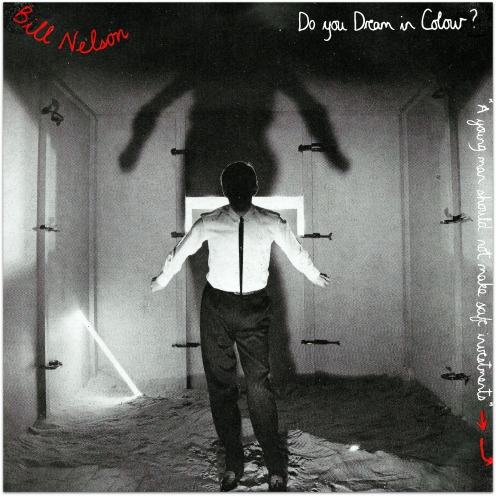 After what felt like an eternity in fan-world, but was probably about twelve months, Bill bounced back with a brace of catchy, quirky, DIY singles – the jaunty ‘Do You Dream In Colour’, on his own Cocteau label, and ‘Rooms With Brittle Views’ for chic Belgian imprint Les Disques Des Crepuscules, which also released records by A Certain Ratio and Sheffield pals Cabaret Voltaire. Loyal fan that I am, I dutifully buy both 45’s, and while I like them, I probably don’t like them as much as I adore ‘Give Me Back My Man’, ‘Atmosphere’ or even ‘Funkin’ For Jamaica’. 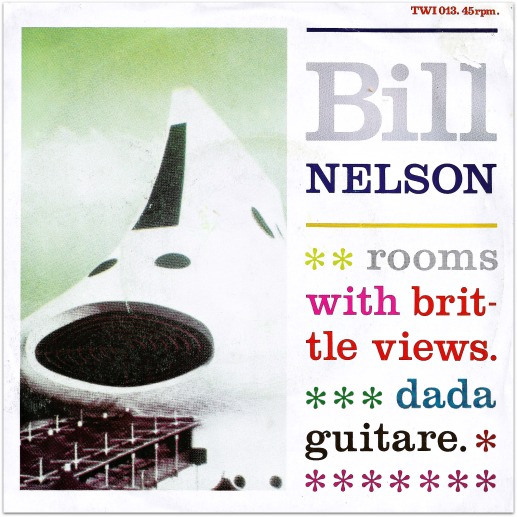 Suddenly back in vogue, Bill Nelson signs to Mercury Records, part of the giant Phonogram label group. The album, entitled ‘Quit Dreaming And Get On The Beam’, and largely made up of recordings made for, and bought back from, EMI is released in early May. Partly thanks to a free bonus album of Nelson’s home-made TEAC experiments, it charts at number seven on the UK album chart, higher than any Be-Bop Deluxe album ever managed. 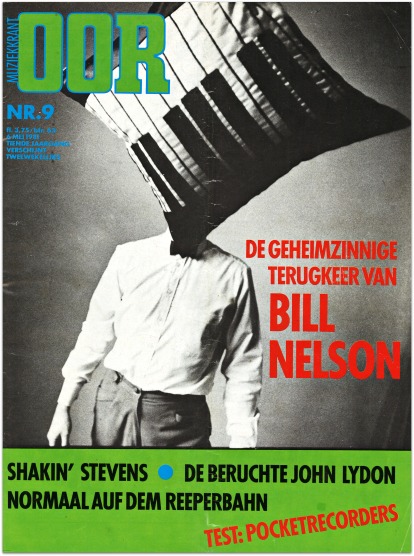 Eager to capitalise on this successful comeback, a back-to-basics UK club tour has been hastily booked, eight shows largely focused on Northern cities, where his fan base is strongest. Farewell to the Free Trade and De Montford Halls, hello Retford Porterhouse and The Limit. 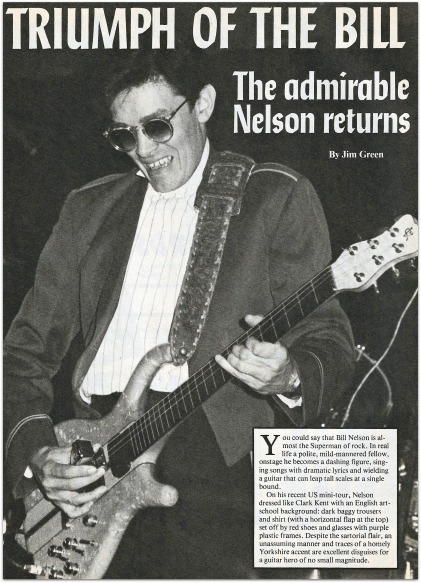 So here we are, the expectant fans and Bill’s new band, The Practical Dreamers. Made up of his brother Ian on saxophone, plus members of The Sinceros and Fingerprinz, they got together just over a week before the tour started. Wearing an enormous pair of glasses, Bill looks like the progeny of Joe 90 and Deirdre Barlow, which lends him a brainy, professorial air. Being their sixth gig, and seasoned professionals that they are, all the instruments on the herky-jerky opener, ‘Don’t Touch Me (I’m Electric)’, already connect with a Meccano-like precision. More Red Noise and new solo songs follow, but not a note of Be-Bop Deluxe is to be heard. It’s all highly proficient, which is fine if you are learning to master a bicycle, but compared to The Cramps, who reduced this very same room to a delirious, squirming mess just last week, it all feels just a little bit safe. Too much Red Noise, not enough red meat.

He changes the mood mid-set with a couple of semi-improvised instrumental tracks, which sound like John Foxx-era Ultravox swapping Popular Electronics magazines with the Yellow Magic Orchestra. Over which Bill appears to play his guitar with a stubby stapler, later revealed to be an E-bow. 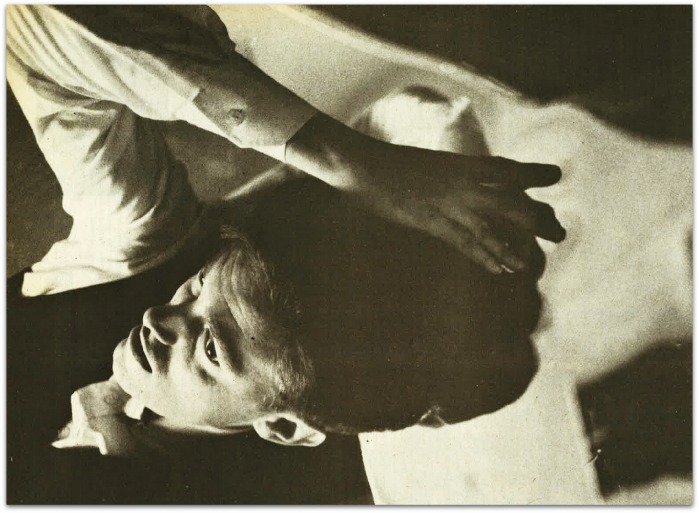 The set ends with ‘Stay Young’, addressed to us, but no doubt Bill having a word with himself as well. I admire his pertinacity; he isn’t going to give us what we want, no ‘Made In Heaven’, no ‘Blazing Apostles’. The encore is a languid solo piece of Frippertronics called ‘Opium’, “something to make you sleep and dream when you get home”, says Bill. Nothing so vulgar as rock ‘n’ roll. He doggedly believes in what he is doing now, trying to leave the past behind, keeping it fresh and interesting to him, and inviting the fans to come along and make up their own minds.

For me, though, there is a sense of growing up and moving on. Much like Subbuteo teams and Airfix kits, Be-Bop Deluxe now belongs to my past. Like his only hit song says, we were ‘Ships In The Night’, Bill the elegant ocean liner Ile de France, me innocently and excitedly barging around in his impressive wake. I’m happy that our routes crossed, but now there are other oceans I want to explore.

I stuck with Bill for ‘The Love That Whirls’ in 1982, and then gave up after 1983’s ‘Chimera’. When I was on strike and ran out of money in 1984, I sold all my Be-Bop Deluxe and Bill Nelson albums to Rare & Racy on Division Street.

The next time I saw Bill Nelson again was in 1998, at The Purcell Rooms in London, opening for John Martyn. Alone on stage, he played a beautiful instrumental set of Wes Montgomery-inspired jazz guitar.

According to Discogs.com, he has released 111 (Nelson in cricket – ha!) solo albums since ‘Quit Dreaming And Get On The Beam’.

*Be-Bop Deluxe played a secret gig at The Black Swan in Sheffield in 1976, under the name Funky Phaser And His Unearthly Merchandise.

Big songs on The Limit dance floor from May 1981 playlist on Spotify here.

You can check out https://mylifeinthemoshofghosts.tumblr.com/ for more pictures, playlists etc.

Thanks to Jon Downing and Brent Sharp.