“I got fined forty quid for putting a poster up. The bloke who beat his wife up was only fined thirty.”

Steve Chapman fought the law, and the law won. The Stunt Kites’ guitarist is regaling us with his tale of a run-in with the Sheffield Magistrates Court. The usual suspects – old school pals Lango, Timbo, Wilma and I – are in The Bay Horse pub. We are unanimous in our verdict that the law is an ass, as we adjourn to talk, and drink, the hind legs off a Friday night. Our case-load for the evening includes The Sportsman, The Hallcar, The Normanton, where the locals look at us funny because we drink red wine; and getting blitzed in Pitsmoor.

The dawn of the 80’s has only registered a minor blip on the flat line of unemployed life, as I enter my second year of signing on. The Soviet Union has invaded Afghanistan, prompting fears that the cold war might be heating up again. Nearer to home, the police have asked pubs and clubs to play a tape of a recorded voice - “I'm Jack. I see you are still having no luck catching me” - which they believe to be that of The Yorkshire Ripper. With the callow teenage disregard of quick on the droll pun-slingers, we wonder if they might have better luck with a remix called “Ripper’s Delight”.

In music, “Anarchy In The UK” is number one again on John Peel’s Festive 50, rapidly becoming “Stairway To Heaven” for the Sniffin’ Glue generation. Pink Floyd are at the top of the UK singles chart with “Another Brick In The Wall”, proof that the prog-rock dinosaurs were not obliterated by the punk rock fireball, but were simply hibernating.

At the George IV pub, my beloved Blitz club at the George IV pub continues to be the tumble-down fulcrum of the local live music scene. The year kicks off with a shambolic set from the Stunt Kites, the sound of a band being ground down by drugs, drink and public disinterest. 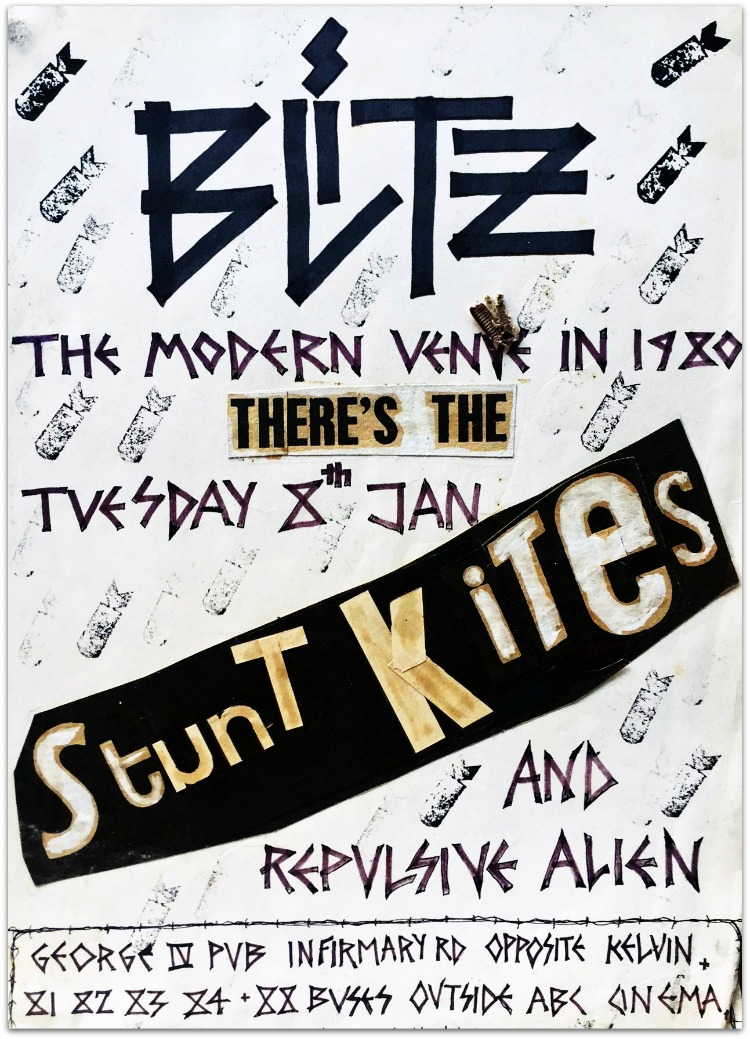 The following week sees purple-haired promoter Disco John take a chance on Urban Tech, three synth-wielding steel-workers from Scunthorpe. A rumour goes around that Urban Tech is in fact a nom de plume for Cabaret Voltaire, doing a secret gig. But the busy Tuesday gathering are disappointed to be force-fed an evening of derivative electronic Winalot – “The Numan League” as one observer witheringly describes them, leaving Urban Tech quickly exposed as the Emperor’s Neu! Clothes. 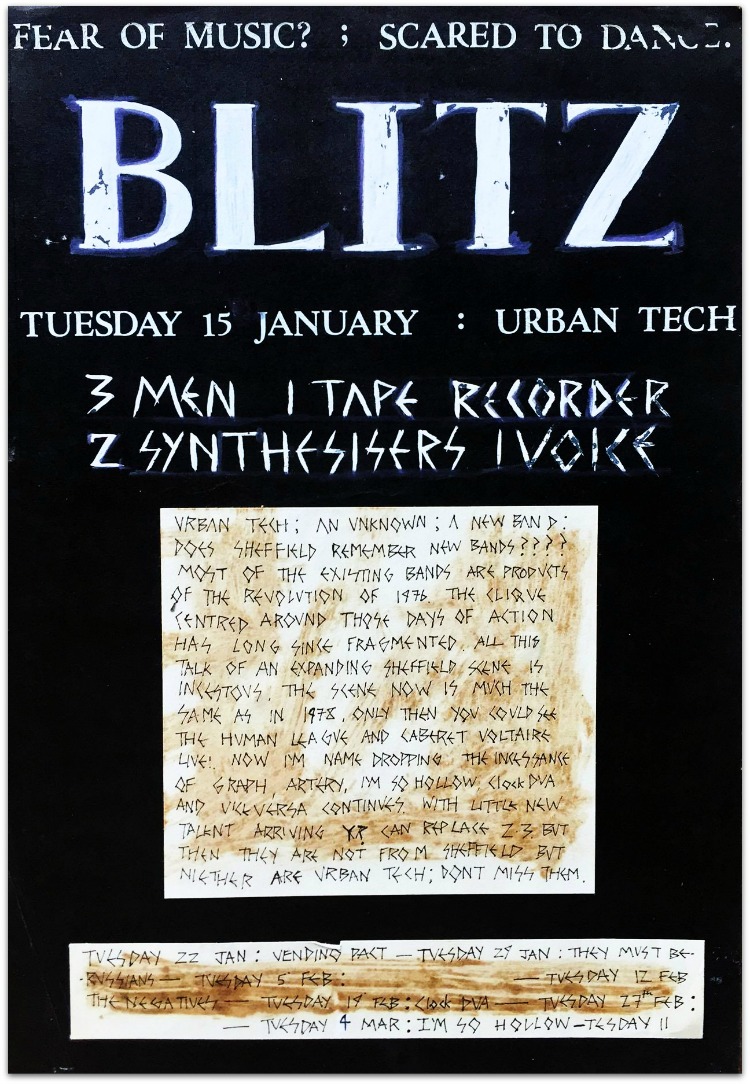 It’s left to a vibrant Vendino Pact, seemingly able to scrape the stratosphere simply by standing on tippy-toes, to help restore my faith in the young sound of Sheffield. At both the Blitz and The Broadfield, where they wryly headline their own ‘Rock Against Groups Who Overestimate Their Own Importance’ mini-festival. 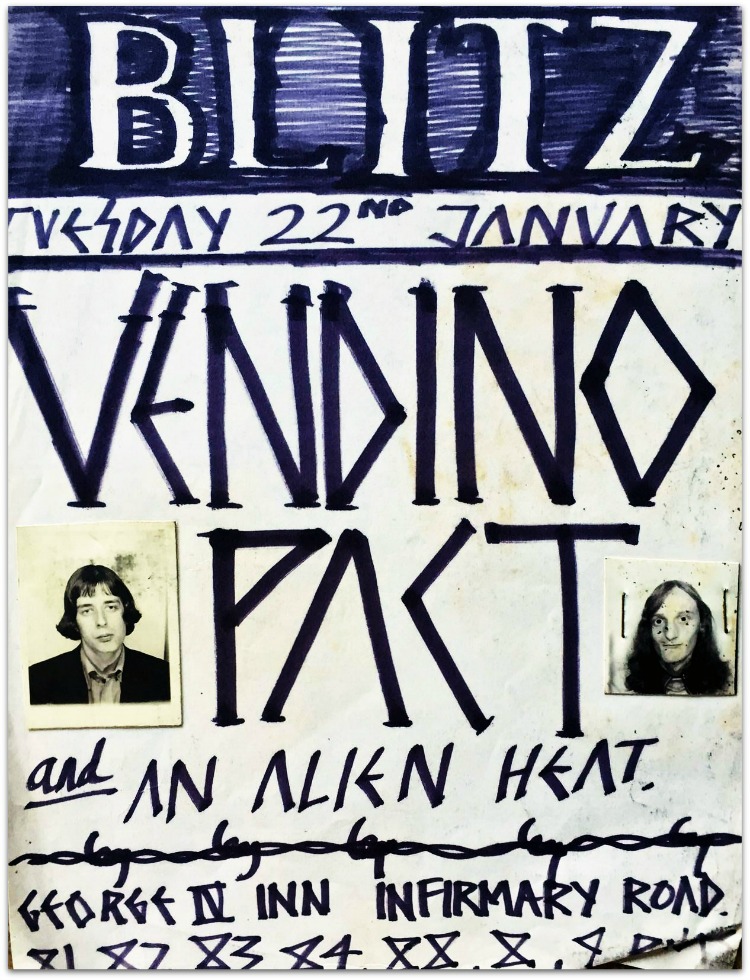 It’s the end of the month before I finally catch up with They Must Be Russians; a group giddily based around a revolving door of university students, with more line-up changes than the cast of ‘Blake’s 7’. Having purchased their Cabaret Voltaire produced debut EP last summer, I’ve been looking forward to seeing them live. 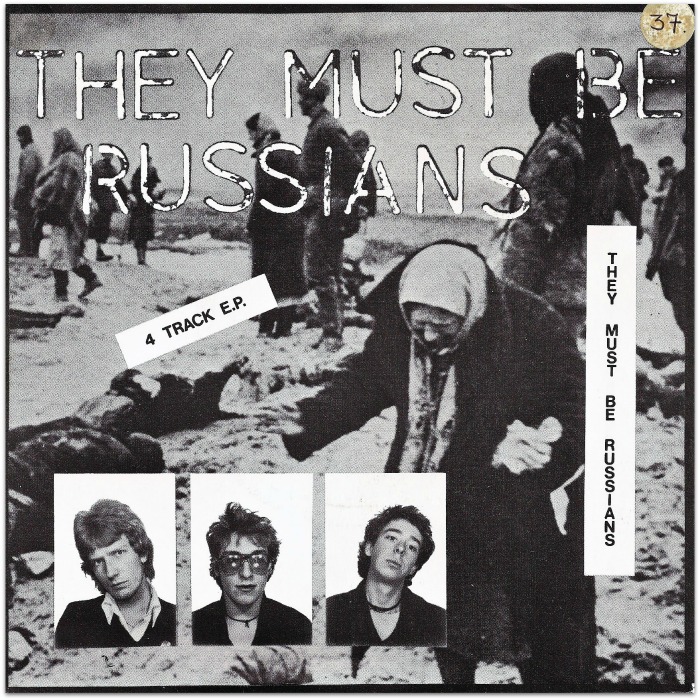 When they started life as a punk band in 1977, each member adopted the familial nomenclature Russian - as a tribute to the Ramones, and as a disguise to dodge the DHSS. Since then, there have already been enough Russians to give the Romanovs a run for their rouble. Martin Russian, Hazel Russian, Tony Russian, Lisa Russian and Chris Russian have already served the motherland, with the current line-up comprising founder member Russ, guitarist Paul and bass player Carl. 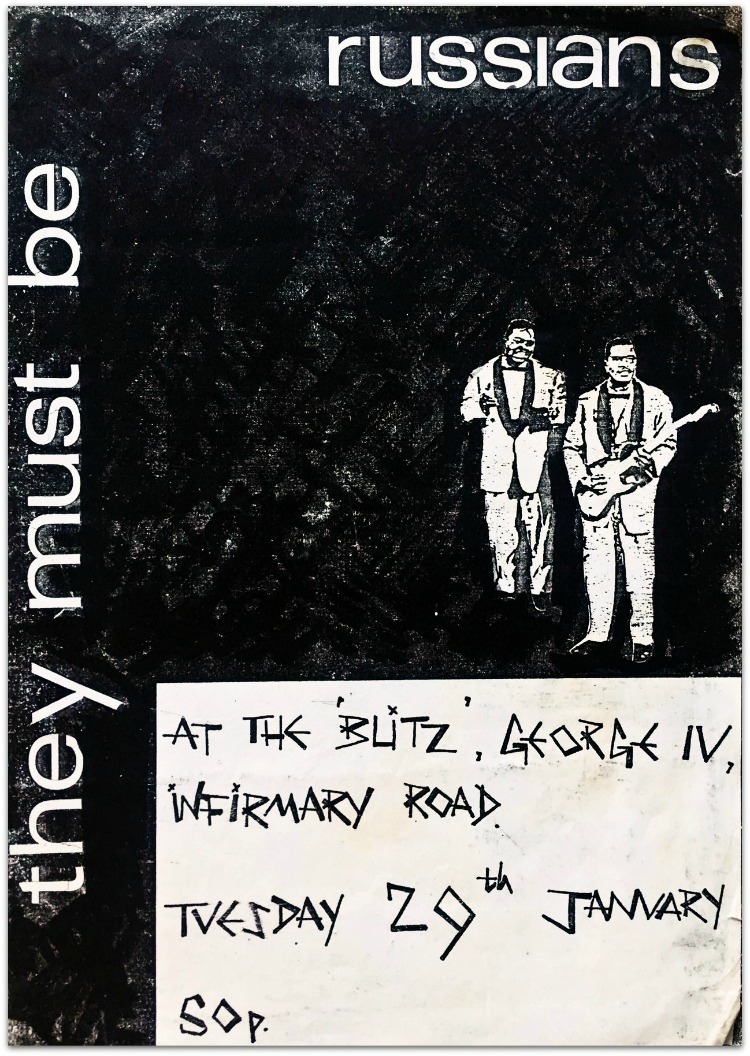 The upstairs room at The George IV is packed to capacity for They Must Be Russians, and a young female fan faints in the crush of anticipation. Looking on are biology student Barry Russell Davies, from Pinner in Middlesex, and genetics undergraduate Paul Widger, hailing from nearby Kenton. The two met at the Sheffield student union Now Society, a hub for would-be musicians, dreamers and drunkards. With the gleeful detachment of outsiders, they have successfully skewered the mores of the South Yorkshire music scene with wicked parodies of Cabaret Voltaire (“Do The Ravioli”) and the Human League (“Being Casseroled”). 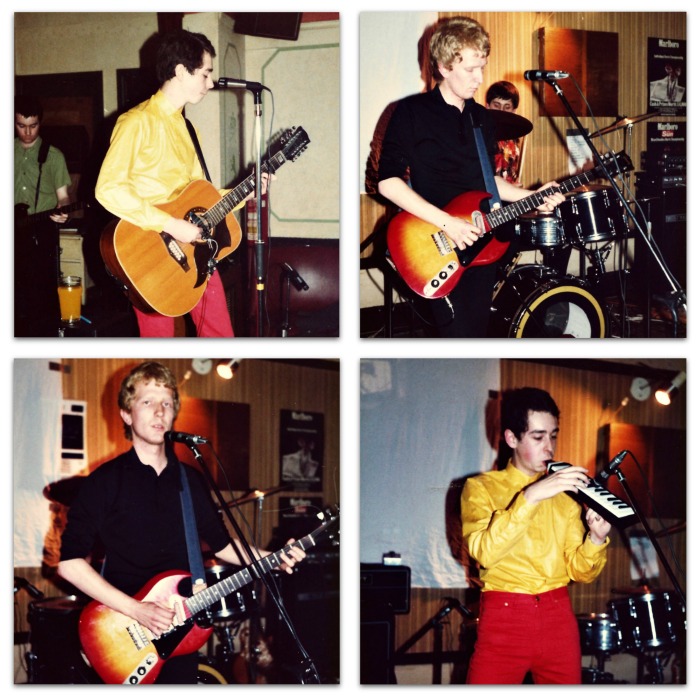 Now, with the addition of Carl O’Connor, a sociology student from Manchester on bass; and the trusty Dr. Rhythm drum machine having being retired in favour of local drummer Haydn Boyes-Weston, They Must Be Russians are in danger of becoming a proper group. The band sneak into the stealthy Déjà voodoo of ‘Where Have I Seen You’, Tom Verlaine’s Television picking up signals from Jamaican roots radio. This is swiftly followed by a cover of Lennon and McCartney’s ‘Do You Want To Know A Secret’, Billy J. Kramer’s winsome rendition spookily re-imagined as a Kim Philby espionage assignment. 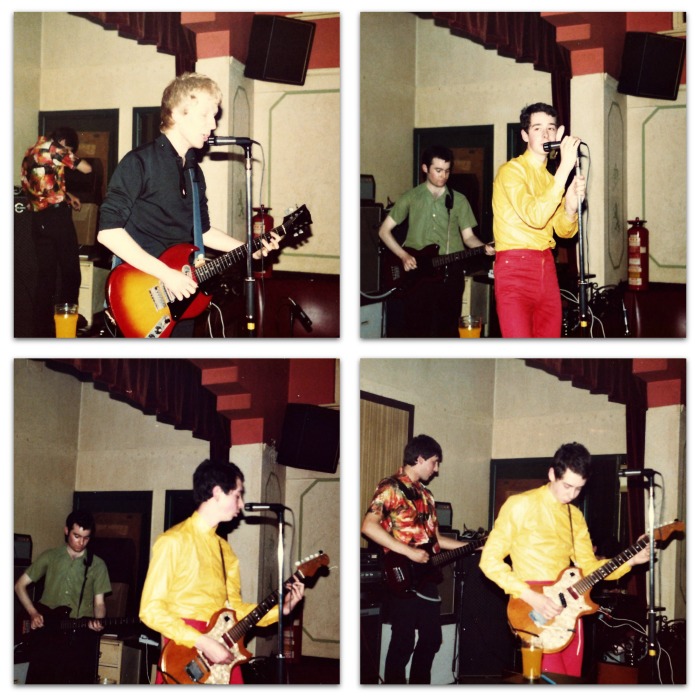 They Must Be Russians live photos by Jon Downing.

Watching the Russians is akin to switching between ‘Monty Python’s Flying Circus’ and ‘The World At War’. The Roy Harper-ish Holocaust Sonderzüge ballad 'Circus' shunts abruptly into the daft ‘Bagpipe Boogie’, Carl manfully wrestling the squealing tartan beastie into submission to general delight. ‘Brigadoon’ then evaporates as the radioactive drone of ‘Nagasaki's Children’ fills the room, a slab of industrial doom which actually manages to out-cab the Cabs themselves. This in turn is juxtaposed with the hilarious uproar of ‘Don’t Try To Cure Yourself’ aka ‘A Talk On VD’; Russ lecturing us on the perils of sexually transmitted diseases, complete with a slide show and deadpan backing vocals from Paul. 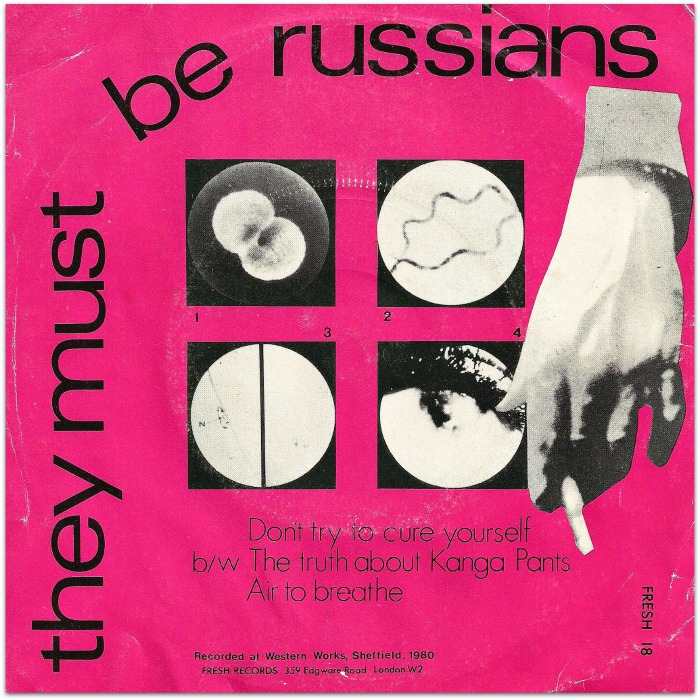 Once you get the hang of these lurching roaring forties-style swings from the sublime to the ridiculous, life on the good ship Russian is largely rewarding, only with an apparently straight faced reading of ‘Nellie The Elephant’ do they slip briefly into Rag Week silliness. The doleful ballad ‘Air To Breathe’, with its chiming twelve-string guitar, is plaintively sung by Russ, while Paul channels Snakefinger of The Residents for his solo. This penultimate offering illustrates their gift for song-craft, when they put their minds to it, and the band exits to wild approbation with the gleeful pogo-fury of ‘I Want To Hold You Know’.

I’m reminded of two nights at The Limit Club in 1978 with the first band I paid to see twice, Lancastrian purveyors of sex ‘n’ drugs ‘n’ sausage rolls The Smirks. Fearlessly traversing (and frequently falling from) the high-wire between The Clash and The Goodies, they were charity shop clowns taking their stupidity seriously. They Must Be Russians at the Blitz club are enormous fun, and instantly rescue a jaded January. Can I be a Russian too? 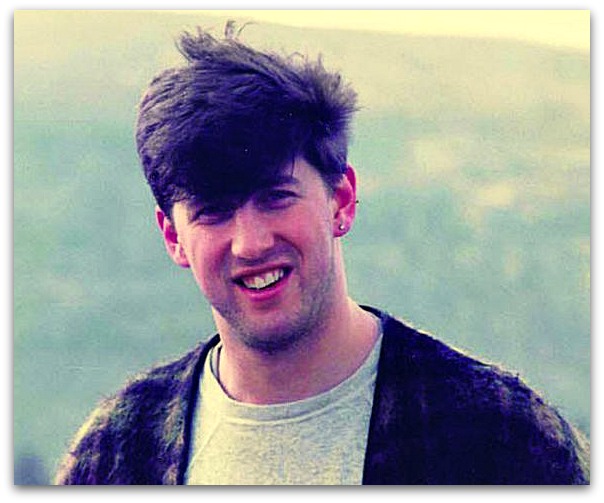 Remembering Haydn Boyes-Weston, who passed away in 2014, aged 54.

They Must Be Russians playlist on Spotify here.

Many thanks to John Blyther for the posters and Jon Downing for the They Must Be Russians live photos.

More pictures and reviews at http://mylifeinthemoshofghosts.tumblr.com/