For way too long.”

“Where will it end?

Where will it end?”

“Here are the young men

The weight on their shoulders.”

And here is a young man for whom the lyrics of Ian Curtis aptly capture so many existential teenage crises. Another futile crush that ends in rejection? Ruinous squabbles within the band? Joy Division are my go-to-band in troubled times, be it playing air guitar to ‘New Dawn Fades’, grimacing in front of the living room mirror, or, lights out and headphones on, map-less in the derelict cathedrals of sound on side two of ‘Closer’.

Joy Division only played Sheffield twice, supporting Orchestral Manoeuvres In The Dark as part of a Factory Night at The Limit in July 1979, and then opening for the Buzzcocks at the Top Rank in October of the same year. I missed them on both occasions. The nearest I have come to seeing them is on a TV show called ‘Something Else’, which was memorably previewed by Peter Powell on BBC Radio 1:

Joy Division performed a ferocious version of ‘Transmission’, and Ian Curtis did his unforgettable flailing limbs dance, a glazen-eyed magician trying to wrangle a recalcitrant rabbit from a too-small top-hat.

DVA played in Manchester the night Ian Curtis died, on tour with Human League and The Scars, but the news didn’t break until a couple of days later when we played in Derby.

“Listen to the silence

Let it ring out.”

I have never known death. All my grand-parents died before I was born, or I was too small to have known them well. My parents, brother, sister, aunts, uncles, cousins, school pals are all of this world. Grief is a stranger.

So on a Monday night in September 1980, when band-mates Charlie, Paul and myself pop into The Beehive for a few post-rehearsal pints, and find the three surviving members of Joy Division quietly nursing their beers after a Western Works recording session around the corner with Cabaret Voltaire, I don’t know what to say.

What I want to say is “How’s it going? I love your band, and I’m devastated your singer killed himself.” They are three or four years older than me, but tonight those twelve-hundred days feel like decades. War veterans in grey uniforms, they’ve experienced devastation that I can’t even start to comprehend, and I’m afraid to be the stupid kid who disturbs their hushed trinity.

March 1981, and a Saturday afternoon visit to Record Collector up at Broomhill to pick up ‘Ceremony’, the debut single from New Order on Factory Records. Joy Division are back. Same label, new name. 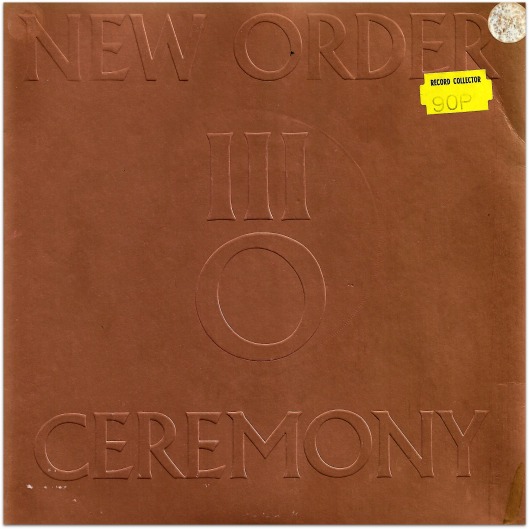 “Turn again and turn towards this time.”

Flick the pages on to an April Wednesday night and New Order are playing at the Atmosphere club night at Romeo’s & Juliet’s on Bank Street, the last night of a short, five-date run. Romeo’s & Juliet’s is usually an urbane weekend destination for Sheffield’s wannabe Farrah Fawcetts and Tom Sellecks, which now and then becomes a midweek venue for the local alternative scene, when aspiring Siouxsie Siouxs and Robert Smiths mope across the dance floor. Local heroes I’m So Hollow played a memorable show here a couple of months ago.

New Order are not known for having a sense of humour, but they must see the funny side of playing a club night named after the posthumous swan-song of their old band. Like Bowie turning up to find himself playing at Ziggy’s, or Paul McCartney seeing that Wings have been booked for Yesterday’s. Sheffield’s threadbare parade of Granny’s brocade and Dad’s three button hand-me-down are out in force tonight, here to shape, prattle and pose in their thrift store finery.

Dressed like a taciturn schism of The Woodcraft Folk, New Order start with ‘In A Lonely Place’, the B-side of ‘Ceremony’. A stately promenade of silt and splendour, we know this one, and we hang on Bernard Sumner’s intoned words:

“How I wish you were here with me now.”

If this gig were a séance, it would be obvious who we are hoping to contact on the other side.

The band have brought in their own PA system from Manchester, and the live sound is monumental. In the little time we have spent in the recording studio, DVA have become enamoured with a piece of equipment called an Eventide Digital Harmonizer, a sound effects unit that can raise or lower the pitch of an audio signal, to create an enviable richness of tone. And while we used it sparingly, tonight it sounds like all of New Order are being digitally processed to “Is it Ella or is it Memorex?” levels of sound reproduction. 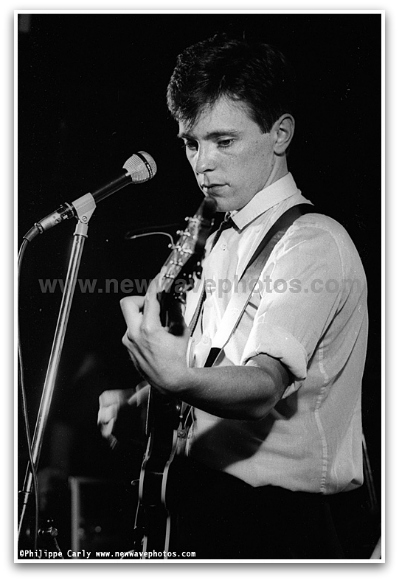 With the familiar opener duly dispatched, the band head off on a seven-song, thirty-five-minute adventure of new material. The pristine, punchy sound reveals the limitations of the vocals, which are shared between Bernard Sumner and Peter Hook. Neither of them yet has the control, delivery and power that made Ian Curtis such a compelling and distinctive vocalist. Bernard’s mongrel moan moves tentatively between the notes, like a rickety lift edging between floors in an ancient tenement, scared that any sudden movement up or down might bring the whole thing crashing to the floor. Hook, meanwhile, favours a punky bellow, brimming with attitude, which cannot disguise the fact that he sounds like Fozzie Bear singing Charles Bukowski. 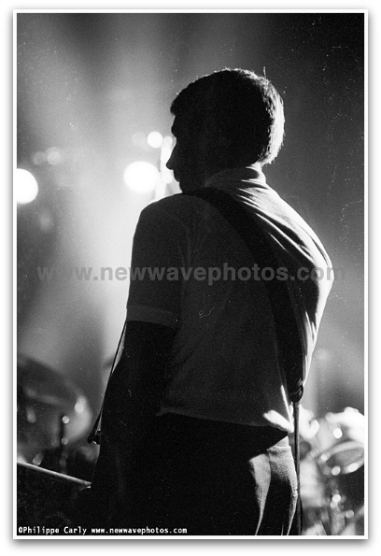 New member Gillian Gilbert stands on the left side of the stage, engrossed in her ARP keyboard. She looks remote and mysterious, Crystal Tipps recast as a Fellini femme fatale. Aside from admonishing their crew for a lack of light or sound, the band don’t really speak; a wilting bouquet of shrinking violets. They stand, staring down intently at their monitors, as if trying to decipher Sanskrit messages hidden in the speaker grills. 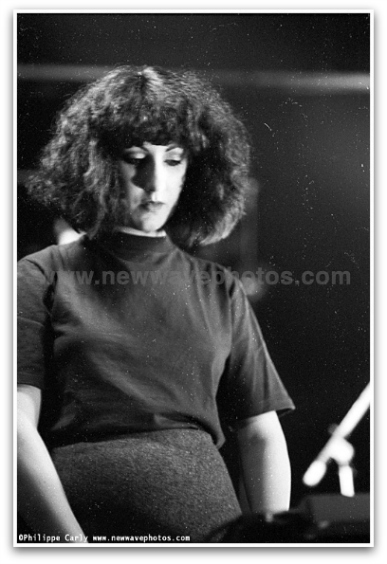 “Drumming’s reet good innit?” pipes up a voice near me. And it’s true. While the other members of the band look cool and detached, lost in scything guitar lines, belligerent bass assaults and bleating, forlorn melodica licks, Stephen Morris bashes his drum kit like a man possessed. Nose to the grindstone, he’s hunched over the hi-hat, as his tireless assault on the hissing golden plates whittles his sticks down to tinder. Even when he allows the lawn sprinkler tic-tic of the drum machine to take over for a breather, he returns stronger still, moving relentlessly between rich Burundi tom-tom rhythms and a crushing, wet-cod-on-marble-slab snare sound. 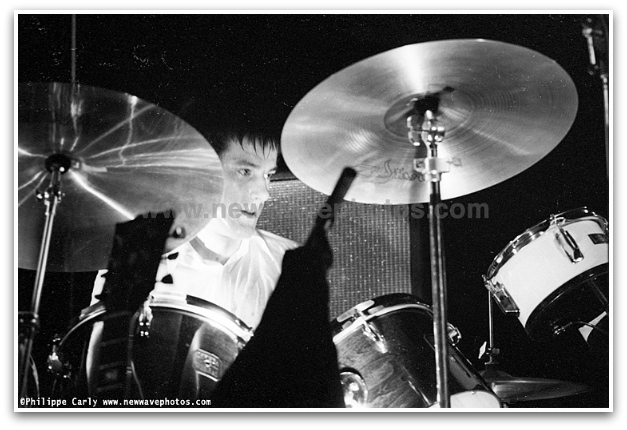 They don’t play ‘Ceremony’, and they don’t play any old Joy Division songs. Anyone here tonight hoping to see some ghosts will have to content themselves with the spirits measured from the over-priced optics behind the cocktail bar. It seems to me that New Order are dealing with the loss of a friend the only way they know how, by going out and making music, the sound of suture. This is a band with open wounds that will take a long time to heal, and tonight we leave them to it, sewing up in public.

I haven't been able to track down any photos from this gig. Philippe Carly has very kindly allowed me to use some of his excellent shots from the New Order concert in Brussels a few weeks later. You can see more pictures from this gig here.

After the Sheffield gig, New Order headed back over the Pennines in a blizzard, to be back in Manchester to record at TV special for Granada TV on Thursday afternoon. You can watch 'Celebration' here.

Thanks to Simon Dell.

More pics etc over at https://mylifeinthemoshofghosts.tumblr.com/