I despise Sir Keith Joseph. And I’m not alone in this.

In an infamous 1974 speech, the right-wing Tory politician suggested that poor families should stop having kids because, “They are creating problem children.” With the result that, “the balance of our human stock is being threatened.” Ever since then, he and his fellow Conservatives have been hated here in staunchly socialist Sheffield. “Labour could put a donkey up for election here in Brightside and Carbrook,” asserts my Dad proudly, “and it would still beat the Tories”.

Joseph is one of Margaret Thatcher’s most trusted winged monkeys, and the Wicked Witch has appointed him Secretary Of State For Industry, specifically to prepare nationalised industries for privatisation. Central to this project is a swingeing programme of redundancies in steel, shipbuilding and coal. Joseph, in turn, has head-hunted ruthless industrialist Ian McGregor to be chairman of the British Steel Corporation.

My employer, the National Coal Board, has a proven track record of efficiently managing redundancies and pension payments to former miners. As a result, it has been appointed as the agency to process the tsunami of lay-offs from the steel works and shipyards. So it is that the son of a hard-left, unionised roller from one of Sheffield’s still dark satanic mills finds himself an agent of the Conservative government. With unemployment approaching two million, I’m signing redundancy letters on behalf of the mysterious P W Stafford. These little paper emissaries of misery will soon drop through letterboxes from Motherwell to Middlesborough, Corby to Consett.

This, then, is real life. I was cosseted through my teens by my parents and school chums - lost in records and books, approximating the bohemian dream of life as an artist-cum-musician. Now I must bid a bitter farewell to that fantasy life. I’ve managed to get myself off the dole, only to find myself in a job that depends upon other people being laid off. I resign myself to the fact that life is a daily battle, a survival of the fittest, and that I must sacrifice idealism in favour of expediency. These are the first heaves in an internal tug-of-war, one that will last for the next four years.

Now I can buy records I haven’t got time to listen to, and books I’m too knackered to read. Gleaming chrome accessories for my drum kit, which once I could only admire through the windows of Hudson’s music shop on The Moor, are now in my possession. 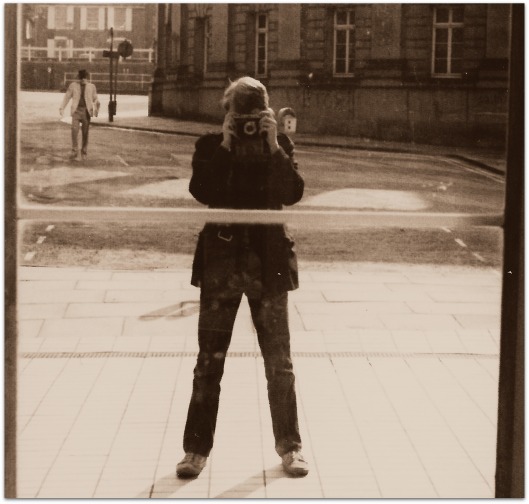 I can now afford to buy a round at the Blitz Club; but the sold-out nights of the big hoe-downs at Sheffield’s best post-punk club, housed in a quaint, rodeo themed room above a pub on Infirmary Road, are coming to a close. Purple-haired promoter Disco John is running out of local bands that can draw a big crowd. Anyone with pulling power – I’m So Hollow, Artery, Stunt Kites, Vendino Pact, and ClockDVA – has already played twice. Yes, it has been packed for They Must Be Russians and the Comsat Angels, but all these bands now dream of getting out of Dodge, in search of wider vistas than those offered by the George IV’s cramped, two-hundred-capacity upstairs room.

So John is looking further afield, seeking new skin for the old ceremony. New wavers The Expelaires come down from Leeds for a night of accomplished but airless and prosaic punk. More daringly, he invites feminist artist Linder Stirling and her band Ludus over from Manchester for an evening of tricksy tunes much like her artwork, all sharp angles and peculiar juxtapositions of flesh and form. I’ve met them before, when DVA shared a bill with them at the YMCA in London last year. I played Ludus drummer Toby’s kit that night, which in my greenness leads me to believe we are going to be best mates for life. I get blank looks from him when I bounce up with a Tigger-ish “Hi Toby, how’s it going?” He flicks through his inner filing cabinet of Northern nutters, but my index card has been misfiled. So much then for the brotherhood of the beat.

In spite of my ideological misgivings, I apply the same puppy-like, can-do outlook at work. After all, I want to make my Mum and Dad proud. So I run around, desperate for everyone to like me: management, supervisors, the Sharon’s and the Bev’s, even the temps. Naturally, I end up pleasing no-one. 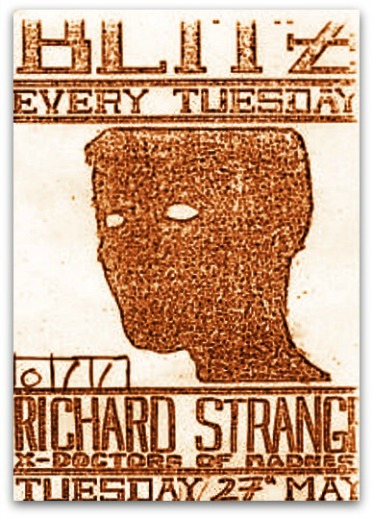 Also pleasing no-one, back at the Blitz Club, is Richard Strange. The one-time front man of glam-proggers Doctors Of Madness has struck out on his own with only a flasher’s mac and a Revox tape recorder for company. Starring in his own one-man show, hubristically entitled ‘The Phenomenal Rise Of Richard Strange’, he plays the Bowie-meets-Bogart hero with plans for world domination. Global dominion seems likely to remain a pipe-dream, if he can’t hold the attention of a small crowd gathered above a pub in Sheffield on a Tuesday night. I’m reminded of other new wave bandwagoneers I’ve seen, like Zaine Griff and Snips - sharp cheek-boned pasticheurs scrabbling in the scree for a foot-hold in the 1980’s. 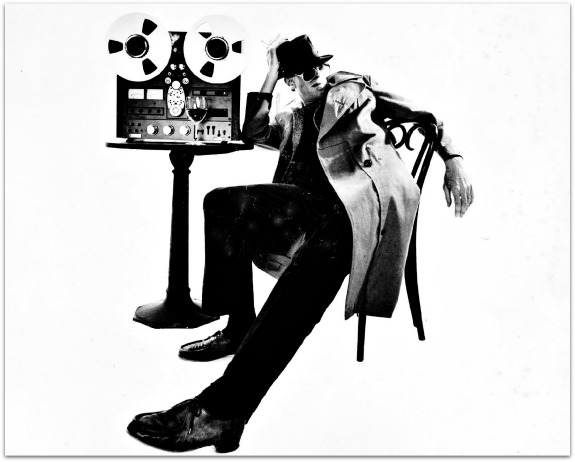 Stranger Than Fiction, from near Doncaster, are so heavily indebted to Bill Nelson that they might as well be called Be Bop Redux. Three years ago I would have probably loved them, but I’m more into Sun Ra than sunburst finishes these days. 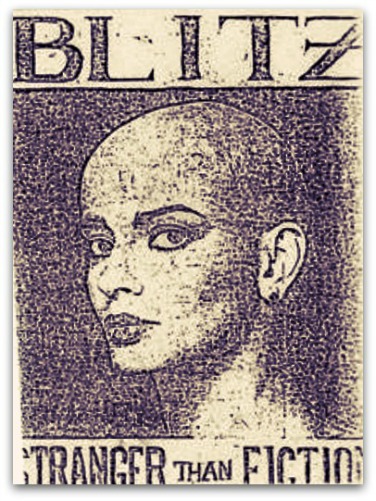 “Keys to the executive washroom next!” I’ve been put in charge of stationery at work, but no-one at the coal board office gets my Jack Lemmon-in-The Apartment joke; I’m riffing on Billy Wilder, but they’re listening to Billy Joel. When you are in charge of Stabilos and staplers for five floors of women, this position - Prince of Post-It Notes - wields untold power. Yet shyness prevents me from being so bold as to actually ask out on a date any of the stars in this firmament of shining maidenhood. Even so, I’m oddly happy being in a state of near constant infatuation, projecting my fantasies onto a smart girl called Dannie, who’s temping here while she studies for her degree in psychology. In the hope of impressing her, I’ve bought a Nietzsche reader.

Back at the Blitz Club, Disco John knows his best bet is to book local bands and play to the home crowd. Basically an incestuous clan, we Sheffield strummers and slummers are never happier than watching someone we know picking away at and sharing their belly-button fluff. Only to gleefully castigate them once they’ve left the stage. 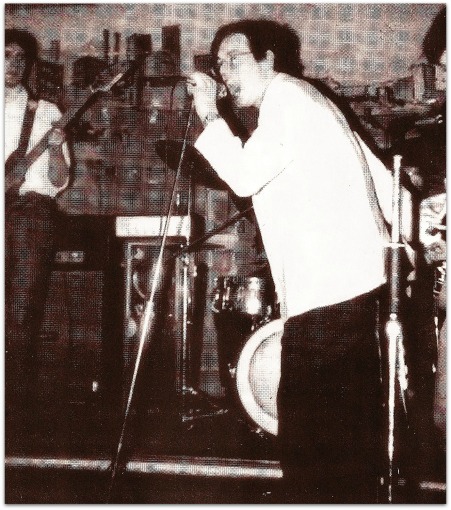 Ian Elliott, photo taken at The Broadfield. Scanned from 'It's Different For Grils'.

The Musical Janeens, basically the singular Salon Graph without Sheffield’s student-sweetheart Pam Young, blithely jam away. Ian Elliott and his merry pranksters from Peterborough are searching for a dubby weirdness, which, due to their innate Middle-Englishness, pours out more Lea & Perrins than Lee Perry.

The room is full for De Tian, the new art-jazz vehicle for Paul Shaft, once of Sheffield punk stalwarts 2.3. Promised a full two-hour immersive, cerebral live experience, we are also advised to get in early. The band, a duo accompanied by the now inevitable backing tapes, have been on for about twenty minutes before they start to draw a bead of flak from my DVA band-mate, avant garde horticulturist and drinking partner Charlie Collins. 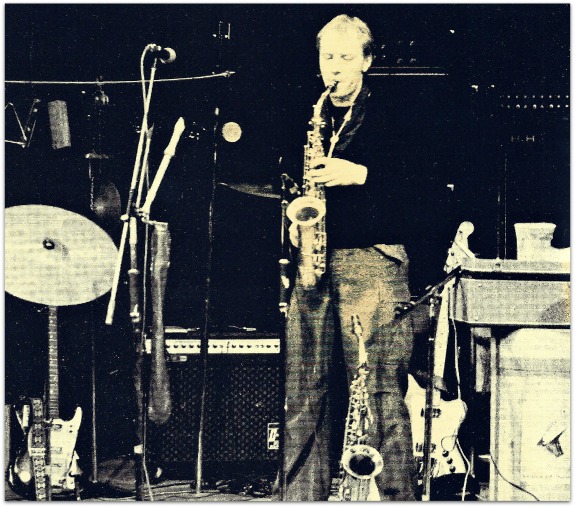 “Backing tapes!” He hisses, “How can you properly improvise over backing tapes, when you already know when the bloody things are going to end?” His fevered fulminations attract the attention of Richard and Mal from Cabaret Voltaire, who have also been lured along in search of an esoteric evening.

Charlie – “What do you reckon then, lads?”

Richard – “I only came for the disco. I’ve been done”.

Henceforth known to us as ‘Dirty Ann’, I see them again at Rotherham Arts Centre in July, when their arid invention is usurped by a thrilling, impromptu rejoinder from Charlie, together with fellow reeds-man Martin Archer and drummer Pete Infante, which culminates in a beautifully sensitive reading of Charlie Haden’s ‘Song For Che’. 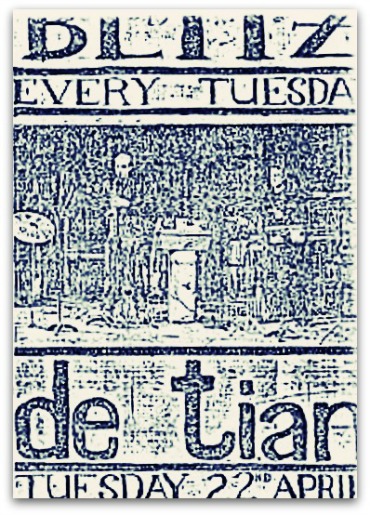 At work I’ve developed a fear of answering the phone. No good news ever comes from the receiver. If it isn’t a dogged, desperate Scottish steel-worker to whom I’ve made the cardinal error of giving my name, then it’s a weeping widow from the Welsh valleys, who is worried that her late husband’s pension won’t continue to be paid out. You've made your bed Roger, and now you're going to get screwed in it. Shut your eyes, think about pay-day, and bury that terrifying glimpse of the little Thatcherite hatching inside, just like Sir Keith hoped it would.

There is one final visit to the George IV pub, when Artery hire the room for their own show on 15th July, and I duly attend to marvel at Mick Fiddler’s starry-eyed savant one more time. Country music legends Don Williams and Charlie Rich look down on us, as we form memories that will soon recede, like half-remembered Saturday mornings with The Lone Ranger and Tonto.

Thanks to Peter Bargh.

For more pics and reviews check out: http://mylifeinthemoshofghosts.tumblr.com/