After band practice we adjourn for a few pints in The Beehive. Charlie is on flying form:

"We're gonna be called The Box", he declares, his moustache flecked with creamy Guinness spume, "and people can read into whatever they like: gearbox, penalty box, black box, money box, shagging, fighting, anything. But after all that, you always simply end up thinking of an empty, boring, cardboard box." Well, thank God for that, we were nearly going to be called No Jass.

We’re all here: Charlie, Paul and me - survivors of the recent DVA purge - and new bass guitar recruit Terry, who is on the same Sheffield City Council gardening detail as Charlie. We don’t have a singer yet, but at least we now have a name.

It’s still early days, but things are starting to shape up. Our new songs, all instrumentals at the moment, are short, sharp bursts of jazzy, punky energy, inspired by Captain Beefheart, Ornette Coleman and The Pop Group. Frenetic drumming and busy bass, with shards of guitar slicing and splicing through Charlie’s arsenal of wailing saxophones. Vital, primal music to move to, kowtowing to no scene or fashion trend. We’re fired up, excited by the opportunities ahead. Anything seems possible.

It’s with this flame in my heart that I bop down West Street and across the city centre, heading for the Poly. The Phoenix Building is hosting a night with Cabaret Futura, featuring my pals in Cabaret Voltaire.

The last time I was in here, earlier in the month, was to see The Cure. The atmosphere then was very different, the venue chock full of angsty students, in thrall to Robert Smith’s bleak, monochrome visions. However, while Cabaret Futura’s enchanted evenings of multi-media, avant-garde happenings might play to a packed house in Soho, tonight – Up North - is quieter. Much quieter.

In a valiant attempt to create a supper club atmosphere, or possibly to disguise the paucity of paying customers, the promoter has laid out tables, chairs, candles and potted palms. This is Sheffield, pal; candles are for power cuts and the only thing potted round here is meat. In fairness, it’s hard to recreate the decadent mood of Cabaret’s Kit Kat Klub in a cold, purpose-built, red brick refectory more usually accustomed to cuppa’s and KitKats.

The Cabs come on early and smoulder moodily for about twenty minutes, raking over embers of dissonant malcontent in near darkness. They were like this the first time I saw them, at The Limit Club in 1978, discordant and impenetrable. Which makes them incongruous guests at this would-be sophisticated, bohemian evening; it’s like finding some graphic pages from ‘Last Exit To Brooklyn’ hastily pasted into a library copy of ‘Brideshead Revisited’. Indifferent to their murky brew, the blasé audience repair to the bar for vittles. The Cabs withdraw, seemingly happy to have slipped a sooty black sock into an otherwise pale wash cycle. 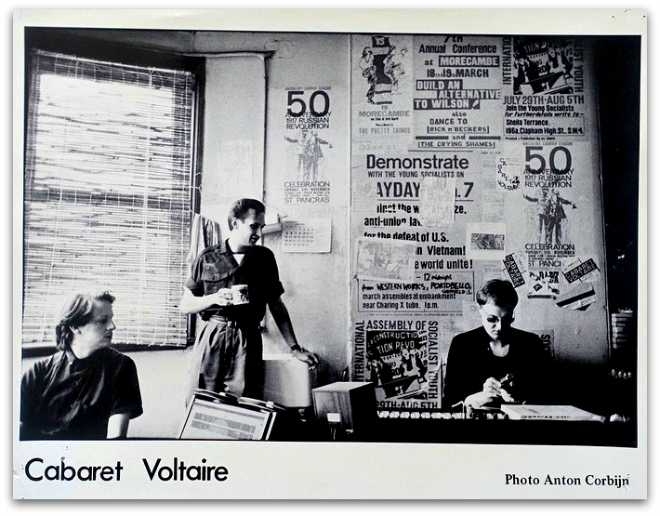 I’ve been spoiled with some remarkable, incendiary music in the last couple of weeks: the dizzy dance-pop of The Plastics, the wild, unfettered improvisations of Air, and, just three nights ago, the raw, Cro-Magnon stomp of The Cramps. The twee, fey and inconsequential stylings of Eddie And Sunshine, therefore, are not for me. Eddie’s in a dinner suit with a dickie bow, adrift in the interzone somewhere between Klaus Nomi and Peter West. Sadly, poor Eddie can’t decide which one he wants to be, new wave freak or eloquent English gent. His partner, Sunshine, wears a flapper dress and sports a jazz-age bob; Sandy Wilson’s ‘Salad Days’ reconfigured for the electropop Eighties. The songs – thin, tinny drum-machine beneath a puff of synth spores – emanate from centre-stage, where a reel-to-reel tape machine rolls, stammering out the backing tracks for Eddie And Sunshine’s billing and cooing. To my impatient ears, this merely exaggerates the ache in panache. There is some awkward acting with telephones, and some mannered, self-conscious choreography. Maybe Eddie And Sunshine think they are matinee idols, but for me they are Edward and Mrs. Simpson in very much reduced circumstances, eking out the long days of exile, dressing up and playing charades in the Windsor branch of Oxfam. 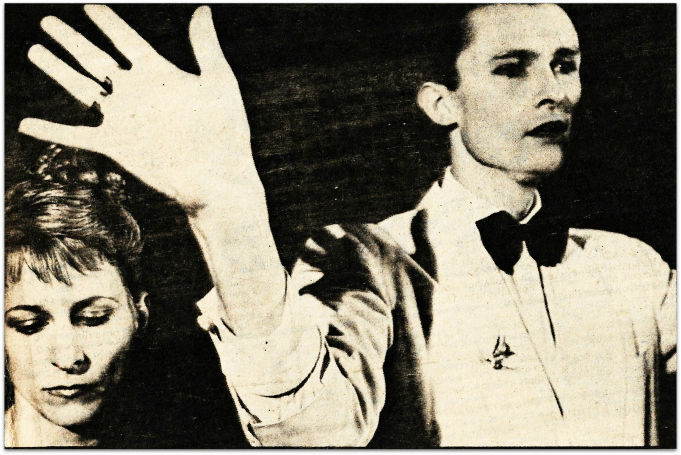 Following some sixth form tomfoolery masquerading as performance art, involving a game of cricket with an invisible ball, the stage is set for the evening’s nominal headliner, Cabaret Futura founder Richard Strange. I was unimpressed when I saw him play to a handful of Blitz Club devotees at the George IV this time last year, and nothing has happened in the interim to change my mind. True, his independently released single, ‘International Language’ has done well enough to get him signed to Virgin Records. This has enabled him to take Cabaret Futura on a UK tour, in support his new album ‘The Phenomenal Rise Of Richard Strange’. But pop music is a cruel race, and Richard has already been overtaken by his namesake Steve and his band Visage. To paraphrase Robert Wyatt, it seems Steve Is Stranger Than Richard, and the only phenomenal thing about his performance is the lack of public interest in the lumpy art-rock suet that he dollops out tonight. 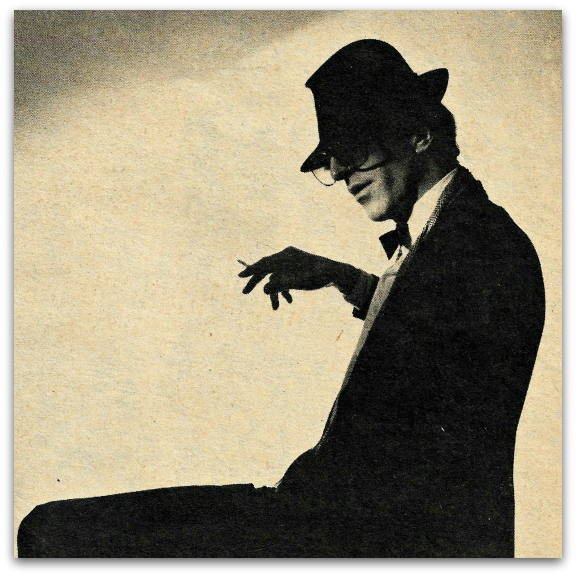 A bigger budget means the Revox ghosts who backed him last year are now a live band; so we have the same trad-rock trappings caked in new wave make-up, just much louder. Strange prowls around the stage, conducting his Bowie-as-Thomas-Jerome-Newton impersonation like the old trouper he is, but I’m not shocked when he is unable to make a connection – The Man Who Failed To Earth.

On the bus home, I reflect that The Box won’t make these mistakes, no flim-flam, no fol-de-rol. Our music will be true as a compass, fearless as Gandhi, raw like cane sugar. And as open and stark as an empty cardboard box.

Eddie And Sunshine released their one and only album - 'Perfect Strangers' - on Survival Records in 1983.

Richard Strange's Virgin album was not a commercial success. He continues to work in London as an artist, musician, actor and teacher.

With thanks to Simon Dell.

You can check out https://mylifeinthemoshofghosts.tumblr.com/ for more pictures, playlists etc.